The American Surrender at Beaverdams

A chapter from the recently released Alun Hughes’ History Made in Niagara describes the Americans’ surrender on a Thorold battlefield, which took place more than 200 years ago this week.
0
Jun 22, 2019 11:00 AM By: Cathy Pelletier 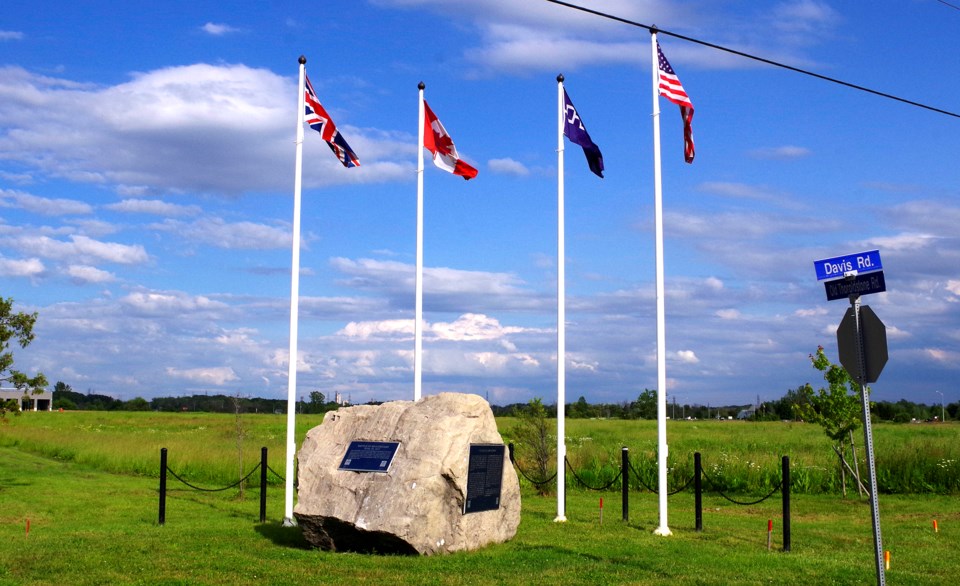 On May 27, 1813, just a year into the War of 1812, the Americans had captured Fort George and the village of Niagara, and the British fell back to the head of Lake Ontario. A week later the Americans marched west, but were defeated at Stoney Creek and retreated to Fort George.

By the third week of June, the British had reentered the Niagara Peninsula and established three forward positions:  at Twenty Mile Creek, Ten Mile Creek, and the DeCew House in Thorold.

In command at the DeCew House was Lieutenant James FitzGibbon, with about 50 men from the 49th Regiment and a band of Mohawk warriors from the Grand River. Another party of Natives (Caughnawaga from Lower Canada) was with Major Peter DeHaren on the Ten Mile Creek below the Niagara Escarpment.

The Americans resolved to fight back, and on June 23, Lieutenant Colonel Charles Boerstler assembled a force of about 600 soldiers (mainly of the 14th Regiment) for an attack on the DeCew House. They left Fort George in the early evening, reaching Queenston at 11 p.m. They remained there overnight and resumed their march at first light on the 24th.

At St. David’s they were sighted by Native scouts, who promptly conveyed warnings to DeHaren and FitzGibbon. (Of course, FitzGibbon had already been warned of the American plan by Laura Secord late on the 22nd, but when the enemy did not appear by morning, he may have relaxed his guard).

At a point beyond St. David’s the Americans descended the Escarpment and continued along Mountain Road towards the DeCew House, only to be ambushed by a force of about 450 Mohawk and Caughnawaga warriors hiding in the beechwoods of northeastern Thorold Township, about two miles from the village of Beaverdams.

There ensued a three-hour battle that ended in American defeat. Virtually all of the fighting on the British side was done by Natives, with FitzGibbon and DeHaren arriving only in time to accept Boerstler’s surrender …

The Americans were getting the worst of it, and Boerstler gave orders to fall back to a site on open farmland south of the crossroads. The Natives continued to harass them as they regrouped, but were constrained by the lack of forest cover nearby. Boerstler’s plan was to charge up Ten Mile Creek Road in an attempt to regain Mountain Road, and then retreat to Fort George, but before he could act, James FitzGibbon suddenly came riding down the road carrying a white flag.

Earlier, FitzGibbon and the 49th had remained at the DeCew House to defend against a direct attack. Hearing gunfire, FitzGibbon rode out on the road to St. David’s to reconnoiter. Seeing the Americans moving onto Mountain Road, he sent instructions back to the house to muster his troops, and he may have witnessed the Native ambush from a nearby rise of land. By the time his men arrived, the battle was largely over—the cause of the delay is unknown—and they “occupied in force” the Mountain Road to prevent an American retreat. But FitzGibbon’s options were limited, for he barely had 50 soldiers and some Natives were dispersing, so when told (wrongly) that enemy reinforcements were on their way, he hatched a bold plan to force a surrender.

Midway between the crossroads and the American position, FitzGibbon was met by an American officer, also carrying a white flag. In the first of several interchanges at that spot, FitzGibbon asserted that the Americans were outnumbered and that he might not be able to control the Native warriors expected to arrive any moment from the northwest. The Americans should surrender to avoid a wholesale slaughter.

Boerstler’s immediate reaction was to refuse, declaring he would never surrender to an enemy he could not see. FitzGibbon responded by offering the Americans a chance to inspect his force, subject to approval by his superior officer, DeHaren. This was a very risky ploy, for there were no Natives coming, the Americans were outnumbered and DeHaren was not even there.

Fortunately, there arrived on the scene a group of dragoons headed by Captain John Hall, who agreed to impersonate DeHaren, and when Boerstler acquiesced to FitzGibbon’s offer, Hall denied the request as highly improper. Boerstler was left in a hopeless situation. His troops were exhausted, they were depleted by deaths, injuries and defections, and their ammunition was almost all gone. They were in no position to face an onslaught by fresh Native warriors, and so Boerstler capitulated.

FitzGibbon’s deception had worked, though it was almost undone at the last minute by the arrival of DeHaren, who unwittingly began to negotiate a surrender of his own. However, a quiet word from FitzGibbon saved the day, and the terms of surrender already agreed upon were signed. (Boerstler’s reaction on learning that he had been thoroughly duped is not known).