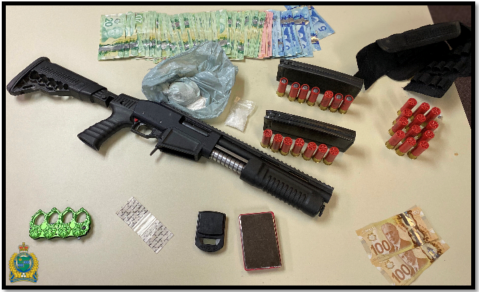 During the course of the investigation, detectives identified a male suspect.

On Thursday Sept. 17, 2020, detectives arrested the man as he attempted to flee from a vehicle, in the area of Western Hill.

Subsequently, detectives executed a Controlled Drugs and Substances Act search warrant, in the area of Western Hill, in the City of St. Catharines.

As a result, detectives seized 15.4 grams of crystal methamphetamine, $2985 in proceeds of crime, dagger SAP6 shotgun, 26 shells, two magazines with seven shell capacity. The estimated street value of the seized drugs is $2300.

Jamie Drake (30 years old), of St. Catharines, has been arrested and charged with the alleged following offences of:

Drake was held in custody pending a bail hearing expected to take place on Sept. 18, 2020 at the Robert S.K. Welch Courthouse, located at 59 Church Street, in the City of St. Catharines.