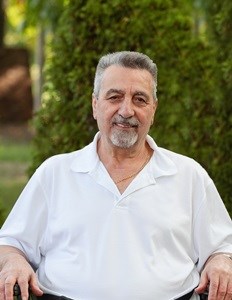 With sorrowful sacred hearts, and in light of our most beloved family memories, we are sad to announce the passing of Leonardo Serravalle on January 19th, 2019.

Leonardo immigrated from Calabria, Italy at sixteen years old with big dreams and a bigger heart and zest for life. Charismatic, joyful, humorously sarcastic, and generous beyond belief, Leonardo built a family alongside a business from the ground up, based upon a reputation of integrity, principles, and faith in God. He was a man who successfully and like Frank Sinatra said, "did it his way" but after surviving an accident that left him paralyzed from the waist down, he faithfully accepted his cross and inevitably, God's way.

He is survived by his devoted wife, Marcella, who nursed him with love and ultimate sacrifice; his three loyal sons, Dean, Frank, and Ryan; daughters-in-law, Vanessa, Nicki and Lauren; and eight grandchildren, Aidan, Sophia, Audrey, Oscar, Leonardo, Tobias, Alaia and London. The family has requested respect for privacy during this grieving period, and is grateful for all messages of support and love, hoping that contributions can be made to The Holy Rosary Church in Thorold, in Leonardo's memory.

When you left home for the first time

Or so you told me

To leave the mountains of your birth

The fig trees in your memory

The wild adventures on your motorbike

The faith of your father

But you landed on flatter earth

And the hurt of an immigrant

To make your own

But you gave to anyone who asked

But you sent secret envelopes to churches You were poor But never so in heart, in love, in life

And so you worked

And so you worked harder

And so you risked every safety

To build a life your way

And then you fell

Tripped upon a cross that

You would take up and carry

But always with hope

And now you are called

But this time welcomed

In the arms of His love