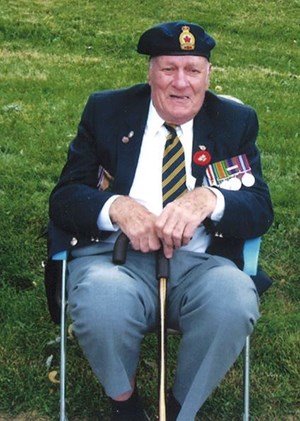 After a long full life, the family announces the peacefully passing of Edward Henry MacDonald at Tabor Manor on Saturday, July 6, 2019 in his 100th year.

Ed was born on July 14, 1919, in Stellarton, Nova Scotia. Beloved husband of the late Jean, since 1941. Father to Clarence (Ruth Ann) MacDonald and Jo-Anne (Joe Carriere) and will also be remembered by Bernice MacDonald. Loving Bubba to Joel (Josie) Carriere, Scott (Sarah) MacDonald, Jamie (Ashley) Carriere and Mike (Irene) MacDonald. Great Bubba to Madeleine, Evelyn, Bennett, Ruby, Cole and Beau. Our father was a veteran of WWII, where he served 5 years with the Regina Rifles.

He was a member of the Royal Canadian Legion Branch 24 St. Catharines for 69 years. Ed moved to Ontario from Stellarton, Nova Scotia in 1947 where he found employment with Ferranti Packard Electric. Our father played in a horseshoe league in Port Dalhousie where he could compete with the best of them. Our parents spent many great years in Florida, until the age of 79, and he was a great cook.

A private family service will be held. If desired, memorial donations to the Lincoln County Humane Society would be appreciated and may be made at the BOCCHINFUSO FUNERAL HOME, 2 Regent Street, Thorold or by calling (905) 227-0161.