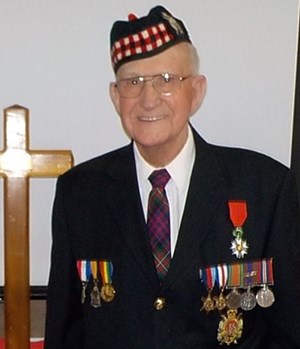 Veteran of WWII serving with the Stormont Dundas and Glengarry Highlanders. A member of the Royal Canadian Legion Branch 17, Thorold and The Canadian Corp. Branch 44, Thorold. John was a member of Queenston-St. David's United Church.

A former electrician he was employed at the Exolon Thorold and retired after more than 40 years where he was also president of their union for many years. He was a dedicated volunteer Firefighter with the Merritton Fire Department from 1949 - 1971. In December 2015, John was awarded the rank of Knight of the French National Order of the Legion of Honour. This was bestowed by the Republic of France to "express gratitude and recognize Canadian Veterans involved in the liberation of France in WWII. Through living veterans France remembered all those who came to French soil, attesting to their courage and devotion to the ideals of liberty and peace."

John died peacefully in his 96th year holding his daughter's hand, at Queenston Place Retirement Residence in Niagara Falls on Saturday June 22, 2019. John was the loving husband of the late Anita (DeFehr): they lived a devoted, peaceful life for almost 60 years, enjoying gardening, birdwatching and sunsets on their property in Niagara-on-the-Lake. He will be forever cherished by daughter Kathryn Jordan (Rev. Martin Asumang Birikorang, deceased). His eldest daughter Sandra (Bieman) predeceased her father and was never far from his thoughts. John will be missed by son-in-law Murray Bieman. Four grandchildren express profound gratitude to Grandpa whose unconditional love, patience, wisdom and delight in the world of nature have shaped their lives. Fondly remembered by granddaughters Abbey Peters (Mike) of New Zealand, Ainslie Peters (Luke) of Ireland and grandsons Matthew Bieman of Canmore, Alberta and David Bieman (Genevieve) of Toronto and great grandson Jebiah. John was brother to Madge Jordan, Shirley (Bill Black), Lillian (Norm Lynch) and Jean (Omer Ferry) all deceased. Uncle John will be fondly missed by their children and grandchildren.

He will be lovingly remembered by Bruce and Laurie Peters and Gordon Loomes. Recently family and friends gathered at Queenston Place Retirement home to celebrate John's 95th birthday and to honour the 75th Anniversary of his participation in the Juno Beach invasion on D Day June 6th, 1944. We were so fortunate to be able to express our love and gratitude not only for his service but for the lessons he taught by example; responsibilities accepted, duties fulfilled, sacrifices made. John spread joy in the world with his smile and gentleness, he has often been referred to as "the epitome of a gentleman".

The Jordan family cannot overstate our gratitude toward Dr. Hill and the staff at Queenston Place. Dad considered it his home and considered the staff part of his family. You embraced and cared for him lovingly for 16 years. Thank you!

At John's request he is to be cremated and a service to celebrate his life will be held at a later date. If you wish to honour John's life you could consider supporting your local legion through their Poppy Campaign, donating to the War Amps, observing Remembrance Day and supporting programs to educate our youth in its importance.

Memories and Condolences
We welcome your feedback and encourage you to share your thoughts on this story. We ask that you be respectful of others and their points of view, refrain from personal attacks and stay on topic. To learn about our commenting policies and how we moderate, please read our Community Guidelines.