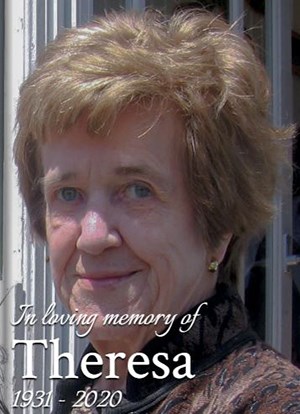 (Served in the RCAF as a Leading Air Woman at Greenwood, Nova Scotia.)

Theresa was a petite force of nature armed with a lightning-fast mind who could bring the house down with one dryly measured quip. The quiet bemusement on her face belied a razor-sharp wit and keen eye for the absurdity and silliness of any situation. After a brief illness Theresa passed away peacefully on Thursday, June 18, 2020. She was in her 90th year. In 1953, at CFB Greenwood, Nova Scotia, Theresa met Mario who became her best friend and husband of 65 years. She was a loving Mom to Kenneth (Wendy), Dominic (Donnell) and Christopher (Jodi). Dear Nonna to Erika, Noah, Alyssa, Miranda, Tessa and Emerson. Sister to Patrick (Eleanor) Murphy and the late Thomas, Jean, Margaret (Peggy), Gerald, Bernadette, Winnifred (Bunny), Dennis and Ann. Predeceased by her parents Patrick and Muriel. Sister in law to Norma Murphy, Dino (the late Ida) Girotti and Scotty (Anna) Girotti. How a Murphy girl from Port Hood by way of Pictou, Nova Scotia could end up becoming Nonna to her grandchildren and one of the best Italian cooks among her Ontario in-laws is anyone's guess. But to those who loved her it's a testament to her nature; at once resilient and open. Theresa will be deeply missed by all of the Murphys and Girottis scattered throughout North America.

Respecting Theresa's wishes, a private family committal service was held at Lakeview Cemetery on Thursday June 25th, 2020. If desired, donations in Theresa's memory may be made to the Heart and Stroke Foundation Canada. www.heartandstroke.ca