TORONTO — Vladimir Guerrero Jr., Reese McGuire, Trent Thornton and the rest of the youthful Toronto Blue Jays have a month left in the regular season, 26 games to learn as much as they can.
0
Aug 30, 2019 11:51 PM By: Canadian Press 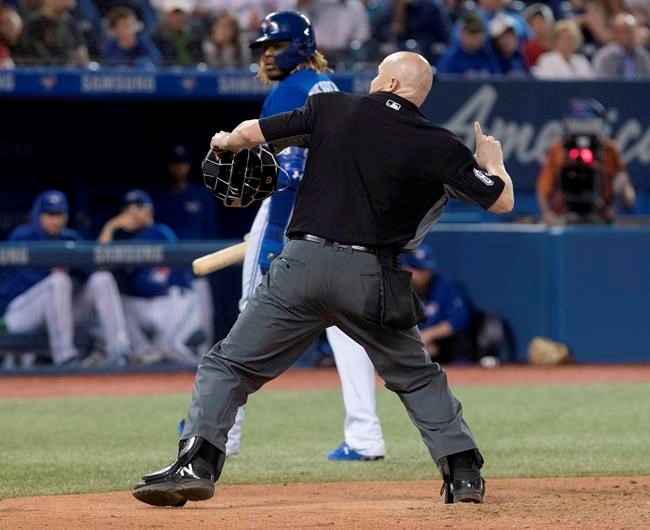 TORONTO — Vladimir Guerrero Jr., Reese McGuire, Trent Thornton and the rest of the youthful Toronto Blue Jays have a month left in the regular season, 26 games to learn as much as they can.

They learned one such lesson in the seventh inning of Friday's 7-4 loss to the World Series champion Houston Astros when Guerrero was ejected by home plate umpire Mike Estabrook for arguing calls. Guerrero had struck out swinging but was upset over Estabrook's calls all night.

"But it's a learning lesson for our kids. There's no way to win with arguing."

George Springer had a three-run homer and had an RBI double as Houston (88-48) racked up 13 hits. One of those was Josh Reddick's RBI single in a four-run fifth inning.

Wade Miley laboured through 3 2/3 innings for the Astros, striking out five but issuing five walks and giving up an unearned run on two hits.

Collin McHugh (4-5) earned the win, with former Blue Jays pitcher Joe Biagini, Hector Rondon, Chris Devenski and Will Harris also coming on in relief. Rondon, Devenski and Harris each gave up runs in their innings.

McGuire, Derek Fisher and Cavan Biggio all had solo home runs for the Blue Jays (54-82). The homers came in the seventh, eighth, and ninth innings respectively. McGuire believes that learning how to build momentum off of each other is another important lesson.

"That's the thing, we're a young clubhouse but we're all trying to just play our game," said McGuire. "We've all played with each other at some point coming up. When things are going good for someone or someone's having a rough game we just feed off of each other and pick each other up.

"You saw it tonight in the ninth. We're still liable to put up some runs."

McGuire was also responsible for Toronto's opening run in the second inning when the glove of Astros catcher Robinson Chirinos got in the way of his swing with the bases loaded. Estabrook called catcher interference on the play, sending McGuire to first and scoring Teoscar Hernandez.

"I haven't had that happen probably since Little League," said McGuire. "As soon as it happened, I also got a piece of the ball and something didn't seem right so I immediately pointed."

Reddick's single cashed in Yuli Gurriel to tie it 1-1 in the fifth before Springer launched an 0-1 pitch to deep left field.

Springer's home run bounced off the windows of a restaurant on the 300 level of Rogers Centre, travelling 463 feet to bring home Chirinos and Reddick.

A sacrifice fly by Aledmys Diaz scored Yordan Alvarez from third, giving Houston a 5-1 lead in the top of the sixth.

Springer piled on three batters later, with his double driving in Gurriel and Reddick. That took his RBIs on the night up to four and 77 on the season.

McGuire cut into that lead in the seventh, sending the ball just over the right-field fence. Reddick made an impressive attempt at catching the ball, planting one foot on the wall's cushion to launch himself higher but he just missed.

Alex Bregman's single in the eighth extended Houston's lead to 7-2, driving in Springer.

Fisher fired back for Toronto in the bottom of the inning, sending a solo shot to right field to make it 7-3. Biggio then had the 11th homer of his rookie season in the ninth.

Notes: Commander Chris Hadfield threw out the opening pitch. Pilots from the Royal Air Force's Red Arrows and the Royal Canadian Air Force's Snowbirds were at attention on the third-base line as the former astronaut pitched to Blue Jays catcher Danny Jansen.

MLB rejects 114-game schedule, threatens plan of about 50
Jun 3, 2020 7:28 PM
Canadian golfer Maddie Szeryk sitting fourth at Texas Women's Open
Jun 3, 2020 7:19 PM
Comments
We welcome your feedback and encourage you to share your thoughts. We ask that you be respectful of others and their points of view, refrain from personal attacks and stay on topic. To learn about our commenting policies and how we moderate, please read our Community Guidelines.