TORONTO — Jerry Glanville is intrigued by the prospect of coaching the Saskatchewan Roughriders.
Jan 16, 2019 4:56 PM By: Canadian Press 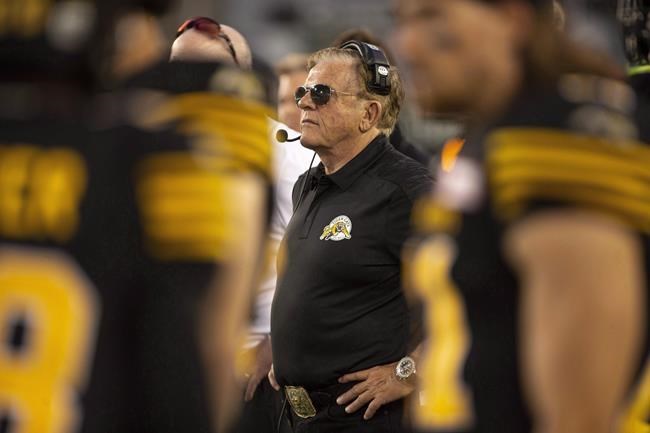 TORONTO — Jerry Glanville is intrigued by the prospect of coaching the Saskatchewan Roughriders.

The Riders are in need of a head coach, defensive co-ordinator, general manager and vice-president of football operations after Chris Jones resigned Tuesday to join the Cleveland Browns' coaching staff.

Glanville, who spent 2018 as the Hamilton Tiger-Cats' defensive co-ordinator but left at season's end for personal reasons, told The Canadian Press on Wednesday he's not spoken with Saskatchewan officials about the vacancies but would definitely listen if they called.

"Nobody has called me," Glanville said via telephone from Knoxville, Tenn.

The 77-year-old Glanville, a football lifer with more than 50 years of coaching experience (including as an NFL head coach with Houston (1985-89) and Atlanta (1990-93), said there'd be plenty to like working in football-mad Saskatchewan.

"I think anybody that loves football has to love their fan base," he said. "Their fan base is second to no one.

Saskatchewan improved steadily under Jones, registering five, 10 and 12 regular-season wins in each of his three seasons. Jones was named the CFL's coach of the year in 2018 after a 12-6 season but the Riders lost 23-18 to the visiting Winnipeg Blue Bombers in the West Division semifinal.

Jones, a 51-year-old native of South Pittsburgh, Tenn., joined the Riders in December 2015, one week after guiding the Edmonton Eskimos to the Grey Cup as head coach.

Hamilton (8-10) finished second in the East last year. After defeating the B.C. Lions 48-8 in the conference semifinal, the Ticats dropped a 46-27 road decision to the Ottawa Redblacks in the division final.

Glanville has appeared in movies, driven race cars and served as a television football analyst. He's rubbed elbows with such big-name entertainers as Waylon Jennings, Johnny Cash and Burt Reynolds. But make no mistake, the legendary Man in Black — a moniker given to Glanville because he wears all-black attire on the sidelines — remains a football coach, first and foremost.

When asked if he's coached his final football game, the former linebacker at Northern Michigan University said, "No, no, no. I've got a few more hellbreaks left yet."

It was during his tenure in Houston that Glanville coined the now famous phrase, "NFL means 'not for long,'” while chewing out an official for a bad call. Glanville has also often left tickets at will call for the late Elvis Presley and rubbed many people — most notably former Pittsburgh Steelers coach Chuck Noll — the wrong way with his brash words and flamboyant antics.

Jones's departure created a huge hole for the Riders and left his successor with the daunting task of having to wear many hats in Regina. But that's not the least bit daunting to Glanville.

"Chris has never worn half as many hats on that I have," Glanville said with a chuckle. "I've never seen him in a cowboy hat.

Glanville politely declined comment when asked why he left Hamilton after one season. But he said having a CFL season under his belt would be very beneficial if he returned to Canada in 2019.

"I think the difference is night and day," he said. "Being up there is an education ... but I think everybody should be better in the second year.

"I love the league, I love the stadiums, I love the fans. It's really refreshing to go up there, it really is. I was blessed in Hamilton because we had very good football players and whatever we asked them to do they did. Nobody played harder than they did, nobody tried harder or hit better. As long as you do that, you're in the fight."