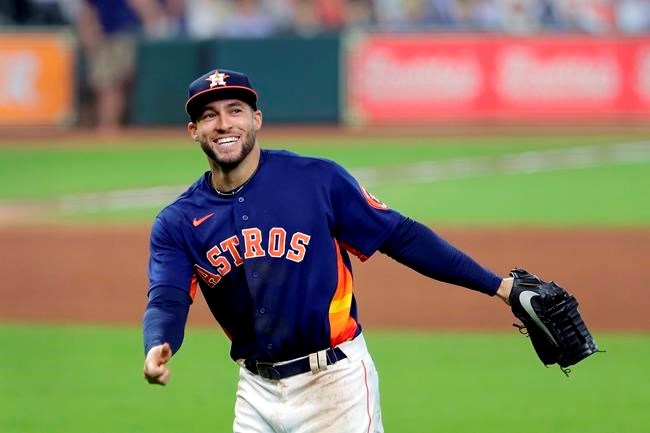 It's understandable, as he is just a few days into spring training with the Blue Jays — his second Major League Baseball team after seven seasons with the Houston Astros.

"I've only known one thing for pretty much my whole life. I've only known the stuff in Houston," Springer said in a video conference Tuesday. "I love those guys, but I'm here now and it's a new opportunity for me."

Expectations are high in Toronto after a busy off-season. The Blue Jays landed arguably the most coveted prize in free agency by signing the 31-year-old Springer, a World Series MVP in 2017 and a three-time all-star, to a six-year deal worth a franchise-record US$150 million (US) in January.

"I'm just going to try to do my job and help whichever way I can, and hopefully lead by example," the outfielder said of the expectations.

"That's understanding that I'm going to fail. Don't try to do too much, don't try to show emotion a lot, but just go out and have fun and enjoy the game, and play how I want to play and how I know how to play."

While he may come to Toronto with a historically rich contract, Springer said he'll have to earn his place with the Jays.

"It's my job to earn the respect of the guys who are in the locker room," he said. "It's not just handed out.

Springer said he has been enjoying the atmosphere so far in the Blue Jays locker room, which includes some familiar faces from his time in Houston.

"Camaraderie is a thing, and I can tell that the guys who have been here, the clubhouse, the locker room that has already been established is a fun locker room, these guys enjoy one another and I'm excited about it," he said.

One of the teammates Springer is excited about is outfielder Teoscar Hernandez, who was a prospect on the rise in Houston before he was dealt to Toronto in the 2017 deal that saw lefty Francisco Liriano head to the Astros.

"I don't think he's scratched the ceiling yet with the player he can be," Springer said of Hernandez. "I'm excited to be back with him.

"He puts in the work, he understands what he has to do, but he's always trying to get better. He's a special talent in my eyes and I love to watch him play."

Moving to Toronto has also reunited Springer with hitting coach Dave Hudgens, who had the same role with the Astros from 2015-18.

Springer said Hudgens's role in his development as a hitter was "huge."

Toronto earned a wild-card spot in the pandemic-shortened 2020 season for their first post-season appearance since 2016. The Blue Jays are hoping to take another step forward this year around a young core of homegrown talent that includes Vladimir Guerrero Jr., Bo Bichette and Cavan Biggio.

"These guys have been playing together for a short time now, but they're quietly learning each other," said Springer, who went through a similar building process in Houston. "The more confidence in a guy you have, the relationship off the field will translate on the field.

This report by The Canadian Press was first published Feb. 23, 2021.