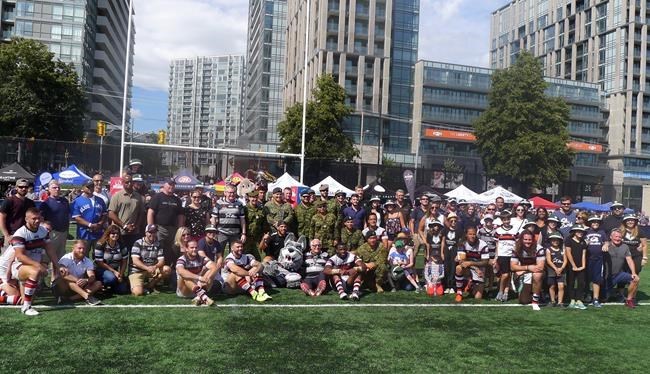 At field level, it was one-way traffic with the Wolfpack running in 11 tries en route to their 20th straight win — a 62-8 thrashing of undermanned Barrow that relegated the semi-pro Raiders to the third tier of English rugby league.

Toronto (25-1-0) is headed in the other direction, having already clinched the Betfred Championship regular-season crown and now looking to earn promotion to the top-tier Super League via the playoffs.

The Wolfpack have not lost since March 9, when they were beaten 46-16 at Toulouse Olympique. Toronto subsequently defeated Toulouse 42-14 and 28-16.

Toronto, which holds a 12-point lead in the standings over Toulouse, wraps up its regular-season schedule Sept. 7 against Leigh Centurions.

Wolfpack coach Brian McDermott, whose team has outscored the opposition 964-344 this season, pronounced his team ready for the promotion playoffs.

"If you'd asked me five or six weeks ago, I'd have said no," said McDermott, who served five years in Britain's Royal Marines before embarking on his rugby league playing career. "I do now. I think we are ready for it physically. I think we're ready for it mentally as well."

The top five in the 14-team Championship advance to the playoffs with the last team standing earning promotion. Toronto gets a bye into the Sept. 22 semifinal by virtue of topping the regular-season table.

The Wolfpack's bid to reach the Super League ended at the final hurdle last season in a 4-2 loss to London Broncos.

For the fully professional Wolfpack, Saturday was another lopsided win over a team of part-timers.

Ackers, Toronto's hooker, had a fine game, setting up several scores via kick or offload.

Jamie Dallimore, making his 100th appearance for the Raiders, scored a try and booted a conversion and penalty for Barrow (4-21-1).

The injury-ravaged Raiders, who travelled with just two bench players — one of whom was dealing with a neck problem — instead of the normal four. Work commitments and suspension also took their toll on the visitors on their 5,400-kilometre trip across the Atlantic.

Barrow may have been short men but that did not stop it targeting several Wolfpack players with some questionable hits. The referee spoke to both captains midway through the first half and tempers flared after some high tackles in the second.

"There's a better version of Barrow than what we saw today," said McDermott, adding his focus as the regular season winds down is "what will that (game) do to us come playoff? What benefit have we got out of that come playoffs?"

"Is that helping the boat go faster?"

McDermott, not one to complain normally, was unimpressed by what he saw as Barrow's constant complaining to sideline officials during the game. He suggested the Raiders would be better off looking inwards than pointing the finger at the opposition.

Barrow coach Paul Crarey said he was proud of his team, operating on a tight budget and dealing with a "massive injury crisis all year."

"This game takes us down but we fought and have been very competitive, more so than last year when we stayed up," he said.

A Barrow knock-on off its first possession set the tone, with McCrone scoring a minute into the game. Despite some errors of its own, Toronto led by 10 points after 15 minutes, 20 after 30 minutes and was up 40-2 at halftime.

A Barrow try cut the lead to 46-8 in the 47th minute. But the tired visitors soon found themselves further behind as Toronto's free-flowing offence hit high gear.

A trip to the sin-bin for Stargroth Amean, for a professional foul in the 65th minute, did not help the Barrow cause.

Russell increased his season try total to 26, one off Kay's team record set in 2017. Fellow winger Kay has 10 tries in an injury-interrupted 2019.

The bottom two in the Championship are automatically relegated to League 1, where Toronto started in 2017. With just one game remaining, the Raiders cannot escape the drop zone and so join Rochdale Hornets in going down.

Toronto improved its career record against Barrow to 6-0-1, with the average margin of victory at 40.