Toronto FC shot its way into the record book, ultimately for futility, in a disappointing 0-0 tie against D.C. United on Wednesday night.
0
May 15, 2019 11:46 PM By: Canadian Press 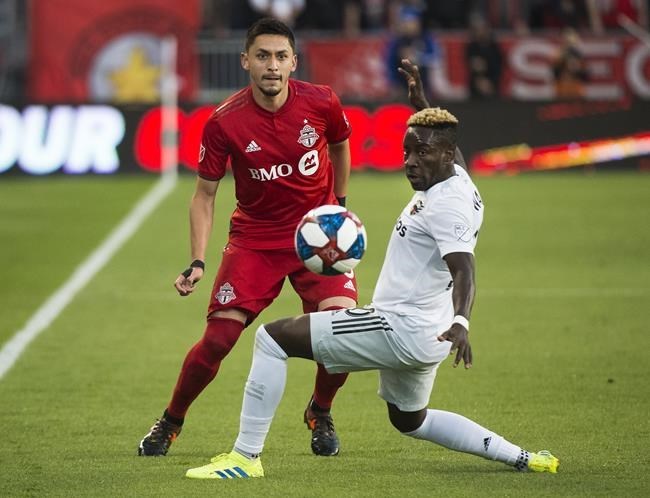 Toronto FC shot its way into the record book, ultimately for futility, in a disappointing 0-0 tie against D.C. United on Wednesday night.

Toronto (5-4-2) launched a club-record 35 shots, notching the third-largest shot total in MLS history — and the most seen in a league game since 1998. All for naught.

Outshot 35-3 (13-2 in shots on target). D.C. United (7-3-3) defended tenaciously as Toronto set a league record for most shots in a game without scoring. With star striker Jozy Altidore sidelined by a heel injury, Toronto struggled for the right final touch before an announced BMO Field crowd of 26,116.

"The guys couldn't have played any harder ... They dominated the game basically from the first minute to the last minute," said Toronto coach Greg Vanney.

Vanney chose to see the positives of the lopsided performance. But he acknowledged that his team is lacking firepower without Altidore, who has five goals in six games this season.

"I think we need more," said Vanney. "I think that's been evident for a while. That's something we definitely have to consider and have talked about. We've got to work on that."

Canadian Jordan Hamilton, subbing for Altidore, had nine shots and hit the crossbar. Spanish playmaker Alejandro Pozuelo, who also has five goals this season, had seven shots, 134 touches — the most by a D.C. player was 56 — and was credited with creating 11 chances.

Toronto wingbacks Nick DeLeon, who only played the first half, and Auro had four shots apiece.

D.C. 'keeper Bill Hamid made several good saves in collecting his seventh shutout of the season but Toronto lacked bite up front.

The Toronto offence is not without weapons. Going into midweek play, Vanney's team ranked second in the league averaging 2.20 goals a game.

But after scoring 18 goals in its first six games (4-1-1), it has scored just four in the last five (1-3-1). Altidore has played just 18 minutes in those five games, due to hamstring and heel problems.

The MLS record for most shots by one team in a game is 38 (set by the MetroStars against Tampa Bay on June 3, 1998), according to the Elias Sports Bureau. Dallas managed 36 against Miami in August 1998.

The previous Toronto record for shots in a game was 28, against Chicago on April 21, 2012.

Toronto controlled the play, outshooting D.C. 20-2 (7-1 in shots on target) in the first half alone but could not score despite 78.9 per cent possession. The 20 shots represent a club record for a half (previous mark was 17).

It marked only the second time an MLS team has registered 20 or more shots in the first half (the MetroStars had 22 in June 1998 against Tampa Bay).

The league record for shots in a half is 23 (by Sporting Kansas City against Vancouver in the second half in April 2018).

Next up is a Saturday visit to Salt Lake, Toronto's fifth game in 15 days.

Kickoff was slightly delayed by lightning strikes in the region but there were mainly clear skies when the game started at 8:15 p.m. local time.

The trio accounted for 12 of D.C. United's 17 goals going into the game. Former Toronto forward Quincy Amarikwa, making his first start of the season, led the D.C. attack.

Rooney and Acosta came on in the 48th minute with Arriola joining them in the 62nd minute.

D.C. United is unbeaten in its last three matches (2-0-1) and has gone 3-1-1 in its last five games, posting three shutouts en route.

"It wasn't what we hoped for coming in here to draw but I think we would have took the draw and we were pleased with the overall effort and group mentality we showed," said D.C. coach Ben Olsen. "They had a lot of the ball and shots of course, they put out a pretty good group."

Quentin Westberg started in the Toronto goal for the fifth time in the last seven matches, with former No. 1 Alex Bono on the bench. Vanney opted for a 3-5-2 formation for the second game in a row.

The game was the first for DeLeon against his former team. He played 190 regular-season and playoff games over seven seasons for D.C. United before coming north last December.

After the game, a monosyllabic DeLeon was clearly upset at being pulled early. Vanney said he wanted to insert a left-footed player in Justin Morrow to help deliver crossed.