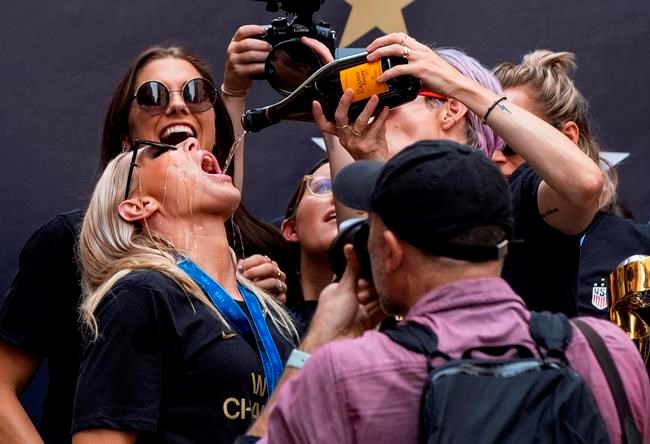 Cordeiro said: "We hear you, we believe in you, and we're committed to doing right by you."

Members of the team have filed a lawsuit demanding pay equity with the men's soccer team.

The ceremony the team followed a ticker tape parade up lower Broadway's Canyon of Heroes.

Democratic Mayor Bill de Blasio presented each team member with a symbolic key to the city.

Rapinoe noted the diversity of team after it was with a ticker tape parade up New York City's Canyon of Heroes for winning the World Cup.

She says "we have pink hair and purple hair, we have tattoos and dreadlocks, we got white girls and black girls and everything in between. Straight girls and gay girls."

Girls in soccer uniforms accompanied the team as ABC broadcaster Robin Roberts introduced each one at a ceremony at New York's City Hall.

Democratic Mayor Bill de Blasio presented each team member with a symbolic key to the city.

He says the team "brought us together" and "showed us so much to make us hopeful."

Fans of the World Cup champion U.S. women's soccer team are gathered at City Hall in New York for a ceremony where Mayor Bill de Blasio will give the players symbolic keys to the city.

The ceremony follows a joyful ticker tape parade up Broadway's Canyon of Heroes.

Co-captain Megan Rapinoe (ruh-PEE'-noh) danced and swigged Champagne from aboard a float headed to City Hall.

Many paradegoers said they agreed with the team's push for pay equity with male players.

Patricia Rice Stella, of Long Island, says that "there's no closing their eyes or turning their back. It's time to make a change."

Members of the U.S. women's soccer team are waving from floats as fans cheer and wave back during a parade in New York City's Canyon of Heroes.

Fifteen-year-old Lily Buccholz, of Sumner, Iowa, stood by the parade route Wednesday with her family while dressed in red, white and blue.

Crowds are chanting "USA!" as they wait for the U.S. women's national soccer team to celebrate its second consecutive World Cup victory with a ticker tape parade in New York City.

Twelve-year-old Aly Hoover, of Glen Ridge, New Jersey, stood at the sidelines Wednesday with a poster of Alex Morgan, one of the team's stars.

She says that if she sees Morgan in the parade she's going to "scream my head off and try to get a hug."

The so-called ticker tape parade is named for the long strands of ticker tape that used to be showered down from office buildings. The tape has since been replaced with paper confetti.

Colorful confetti is already drifting down from office buildings as the parade gets ready to start.

A blizzard of confetti and large crowds are expected at Wednesday's ticker tape parade to celebrate the U.S. women's national soccer team in New York City.

The festivities in of the Women's World Cup champs will begin at 9:30 a.m. in a section of lower Manhattan nicknamed the Canyon of Heroes. The stretch of Broadway from the Battery to City Hall has long hosted parades for world leaders, veterans and hometown sports stars.

The events are named for the long strands of ticker tape that used to be showered down from nearby office buildings. The tape has since been replaced with paper confetti.

After the parade, Democratic Mayor Bill de Blasio will the team with symbolic keys to the city. All tickets for the City Hall ceremony have been issued.

Leafs' Matthews, Marner, Penguins' Marleau relive start of ageless friendship
Apr 6, 2020 5:29 PM
Comments
We welcome your feedback and encourage you to share your thoughts on this story. We ask that you be respectful of others and their points of view, refrain from personal attacks and stay on topic. To learn about our commenting policies and how we moderate, please read our Community Guidelines.