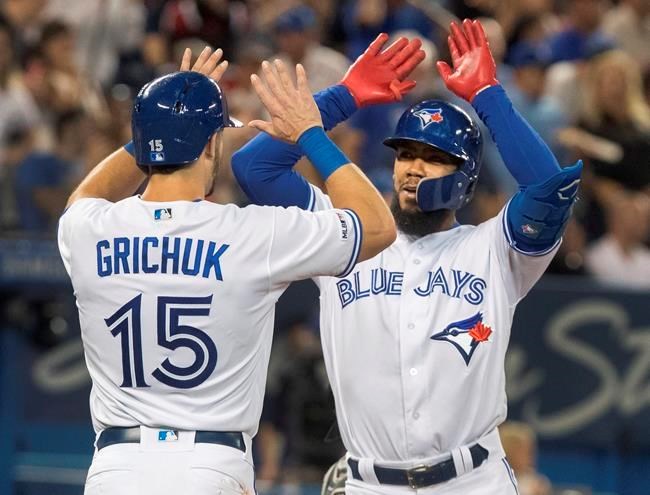 Rowdy Tellez and Teoscar Hernandez homered and Vladimir Guerrero Jr. drove in three runs for the Blue Jays, who turned the game into a rout with a six-run fifth inning.

Toronto (57-89) has won two in a row after ending a seven-game skid. The Blue Jays will go for a sweep of the slumping Red Sox (76-70) — losers of five straight — on Thursday night.

"It's never fun when you're not winning," said Boston first baseman Mitch Moreland. "We've got to start over tomorrow and get back on track."

Both teams used openers for the first two frames. Thornton (5-9), who relieved Wilmer Font, issued one walk and had seven strikeouts.

"I felt I was doing a pretty good job of executing my pitches when I needed to," Thornton said. "I felt pretty good tonight."

Thornton said veteran teammate Clay Buchholz helped him with a couple different grips on his curveball and he first tried it out last Monday.

"I was throwing it in my last side (session) and it just kind of clicked," Thornton said. "I brought it into the game and that was probably the most effective my curveball has been all year."

Boston lefty Bobby Poyner made his first big-league start before he was replaced by Trevor Kelley (0-1). The Blue Jays took advantage of some weak defence in the fourth inning to open the scoring.

Rafael Devers couldn't squeeze a Cavan Biggio fly ball in shallow left field, allowing the rookie to reach on a play generously ruled a two-base hit. Biggio stole third without a throw and scored on a sacrifice fly by Guerrero.

Tellez followed with a solo shot for his 19th homer of the season and second blast in as many nights.

Toronto loaded the bases in the fifth after singles by Danny Jansen, Bo Bichette and Biggio. Guerrero lashed a Ryan Weber curveball into left field to bring two runs home.

Travis Lakins came on and Randal Grichuk belted the reliever's first pitch off the wall for a two-run double. Hernandez then brought Grichuk home with his 22nd homer of the year.

"I always say hitting is contagious and it was tonight," Montoyo said. "Everybody had good at-bats."

Relievers Jason Adam and Ryan Tepera threw one inning apiece for the Blue Jays, who outhit Boston 11-2. Devers and Brock Holt had singles for the Red Sox.

Announced attendance was 14,463 and the game took two hours 49 minutes to play.

Notes: It was the 11th time that Font has opened as a Blue Jay. ... Right-handers will square off Thursday as Buchholz (1-4, 5.31 ERA) was tabbed to meet Jhoulys Chacin (3-10, 5.60). It will be the first time that Buchholz has faced his former team. ... The Blue Jays will continue their six-game homestand with a weekend series against the New York Yankees. The Red Sox are idle Friday and will visit Philadelphia on Saturday.

Leafs forward Johnsson out for season after undergoing knee surgery
Feb 19, 2020 11:20 AM

Coronavirus fears similar to what Vancouver Olympic organizers faced with H1N1
Feb 19, 2020 10:35 AM
Comments
We welcome your feedback and encourage you to share your thoughts on this story. We ask that you be respectful of others and their points of view, refrain from personal attacks and stay on topic. To learn about our commenting policies and how we moderate, please read our Community Guidelines.