PITTSBURGH — The Pittsburgh Steelers insisted they might have been winless through three weeks, but they were far from hopeless.
0
Oct 1, 2019 12:45 AM By: Canadian Press 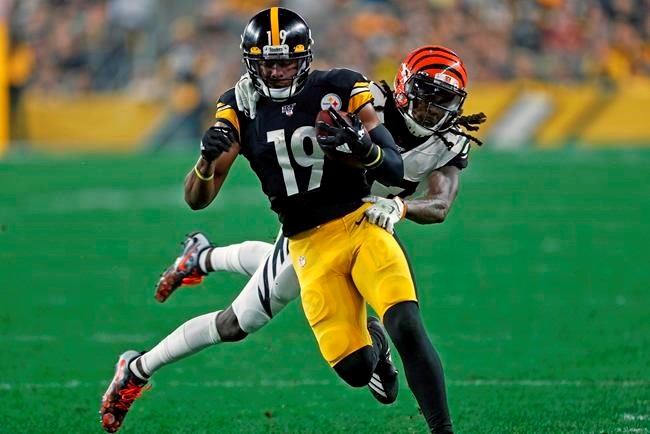 PITTSBURGH — The Pittsburgh Steelers insisted they might have been winless through three weeks, but they were far from hopeless. They stressed the process of finding an identity with franchise quarterback Ben Roethlisberger out for the season with an elbow injury would take time and a collective effort from all involved.

An effort that looked an awful lot like what they put together during a 27-3 pounding of Cincinnati on Monday night.

Mason Rudolph threw for 229 yards and two scores. Running back, part-time wide receiver and occasional wildcat quarterback Jaylen Samuels accounted for 134 yards of total and a 2-yard touchdown run. James Conner emerged from an early funk to run for 42 yards and catch eight passes for 83 yards and a score. The sacked Andy Dalton eight times and held the Bengals scoreless over the final 51 minutes.

It wasn't perfect. But it was a start. One that helped the Steelers (1-3) avoid their second 0-4 start in 51 years and reaffirmed their belief that they can find a way forward without Roethlisberger.

"It's huge," Samuels said. "Coming in 0-3 and coming back, getting a divisional game, that's huge. We've just got to build off this game."

With Pittsburgh's running game going nowhere through three weeks, running backs coach Eddie Faulkner suggested to offensive Randy Fichtner that it might be time to dust off the wildcat. Samuels ran it frequently during his college career at N.C. State, and the Bengals (0-4) certainly looked caught off guard when Samuels lined up in the shotgun and started distributing the ball like a point guard. Sometimes he'd hand it off to Conner. Others he'd "throw" a "pop" pass to a teammate running in motion in front of him. Still others he opted to keep it himself, including on his third-quarter touchdown in which he strolled into the end zone after the Bengals bit on a fake handoff.

"We knew if we could get a lot of guys going sideways, it was going to mess them up a little bit so that's what we did," Samuels said. "It was working. ... We were picking up five, six yards every play. They couldn't stop it."

Samuels ran for 26 yards on 10 carries, caught eight passes for 57 more and was credited with three completions for 31 yards. Conner had 14 touches for 125 yards in all, including a 21-yard sprint through the Cincinnati in the second quarter that gave the Steelers a lead they never came close to squandering while beating the Bengals for the ninth straight time.

Cincinnati coach Zac Taylor became the second first-year coach to drop his first four games with the Bengals. Sam Wyche started 0-5 in 1984 but helped his team rebound to an 8-8 finish. Taylor's task of getting Cincinnati back to respectability will be far harder if he can't figure out a way to protect Dalton.

"To be quite honest, it starts with me," Taylor said. "I've got to make sure the standard is higher than what it is right now, because I haven't done a good enough job."

The eight sacks Dalton endured were a career-high for the nine-year veteran, who also threw an end zone interception in the fourth quarter and was strip-sacked by Pittsburgh's outside linebacker Bud Dupree in the second quarter. T.J. Watt fell on the ball and the Steelers were off and running. Dalton finished 21 of 37 for 171 yards, stressing he felt "fine" physically and that he's not panicking.

"Everybody is going to stick together," Dalton said. "We have from the beginning, regardless of the circumstances of these games, we've stuck together. And so I don't expect that to change."

Tyler Boyd, elevated to the No. 1 receiver while A.J. Green recovers from ankle surgery, was held to three receptions for 33 yards on the same field where he starred in college at Pitt.

Rudolph was uneven at best in his first career start last week in San Francisco after being thrust into the gig for the rest of the season while Roethlisberger rehabs from elbow surgery. Rudolph was considerably sharper against Cincinnati, though he wasn't asked to do much other than find the closest open man —usually Conner or Samuels — and keep the sticks moving. He completed 24 of 28 passes, the only deep shot a 43-yard strike to Diontae Johnson in the third quarter that broke it open.

"Our message all week was stack one (win) and then start stacking more," said Rudolph, who was awarded the game ball by head coach Mike Tomlin.

Will Graves, The Associated Press

Canadian snowboarder Blouin wins World Cup gold in women's slopestyle
Feb 16, 2020 5:49 PM
Comments
We welcome your feedback and encourage you to share your thoughts on this story. We ask that you be respectful of others and their points of view, refrain from personal attacks and stay on topic. To learn about our commenting policies and how we moderate, please read our Community Guidelines.