Another week, another road test for Nick Arbuckle. The sophomore quarterback will make his second straight start Saturday night when the Calgary Stampeders (2-1) visit the Hamilton Tiger-Cats (3-1) at Tim Hortons Field.
Jul 10, 2019 7:54 PM By: Canadian Press 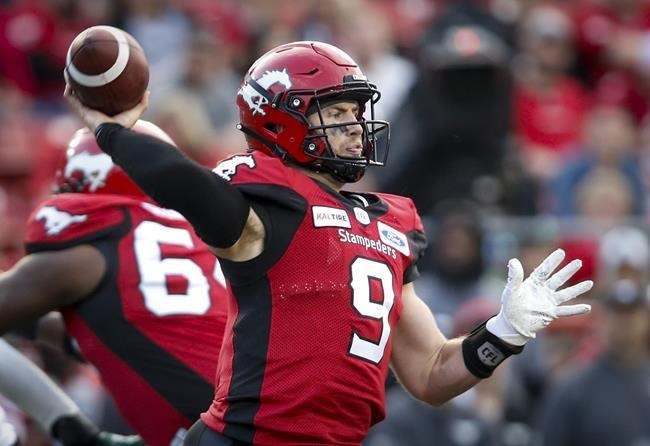 Another week, another road test for Nick Arbuckle.

The sophomore quarterback will make his second straight start Saturday night when the Calgary Stampeders (2-1) visit the Hamilton Tiger-Cats (3-1) at Tim Hortons Field. Arbuckle led the defending Grey Cup champions to a 37-10 road win over the Saskatchewan Roughriders last week in his first CFL start, completing 19-of-22 passes for 262 yards and two touchdowns.

Arbuckle replaced injured veteran Bo Levi Mitchell in the second half of Calgary's come-from-behind 36-32 home win over the B.C. Lions on June 29. He completed all nine passes he threw for 93 yards and a TD —  that being a three-yard strike to Eric Rogers with 42 seconds remaining that capped the Stampeders' comeback from an 11-point deficit.

Shortly after the win, Calgary put Mitchell, the CFL's outstanding player and Grey Cup MVP last season, on the six-game injured list with a pectoral muscle injury. Now, the Stampeders could pull Mitchell off the list any time, but for the immediate future the starting duties belong to Arbuckle, who also ran for a touchdown versus B.C.

Calgary opened the season with a 32-28 home loss to Ottawa. The Redblacks outscored the Stampeders 11-0 in the fourth to secure the victory despite starter Dominique Davis throwing four interceptions.

But Davis countered with three rushing touchdowns in the contest, scoring the game-winning TD on a five-yard run with 1:22 remaining.

Arbuckle has hardly been a one-man show in Calgary's two victories. Rogers had three TD grabs versus B.C. while Reginald Begelton registered four catches for 102 yards and a touchdown against Saskatchewan.

And in the two victories, Calgary has rushed for a combined 220 yards and three touchdowns.

Defensively, linebacker Cory Greenwood leads the CFL in tackles (25) while defensive back Tre Roberson has a league-best five interceptions.

Hamilton is coming off a 36-29 road loss to Montreal last week. William Stanback anchored the Alouettes' victory with 203 yards rushing and three TDs.

Ticats starter Jeremiah Masoli finished 29-of-44 passing for 401 yards with two TDs and an interception. Brandon Banks had seven catches for 86 yards.

Hamilton lost Sean Thomas Erlington to a knee injury. That landed the impressive running back on the six-game injured list.

Ticats linebacker Simoni Lawrence is expected to play after meeting with an arbitrator Tuesday. The CFL slapped Lawrence with a two-game suspension for hitting Saskatchewan quarterback Zach Collaros in the head during Hamilton's season-opening 23-17 home win.

Lawrence appealed the suspension and is eligible to continue playing until the arbitrator renders his decision.

At Vancouver, the Lions (1-3) chase a second straight win following last weekend's 18-17 road victory over Toronto. Mike Reilly threw for 272 yards with a TD and interception but the game's two offensive stars were running back John White (138 yards rushing, TD) and Lemar Durant (nine catches, 125 yards, TD). Edmonton (2-1) hasn't played since dropping a 28-21 road decision in Winnipeg on June 27. Trevor Harris was 35-of-54 passing for 345 yards in the loss.

At Winnipeg, a potential trap game for the Bombers (3-0), the CFL's lone remaining unbeaten team. Matt Nichols gets the start after going out of last week's 29-14 road win over Ottawa. Nichols was injured after opting against sliding to end an 18-yard run. Toronto (0-3) is coming off its gut-wrenching home loss to B.C. after being outscored by a 96-21 margin over its first two defeats. McLeod Bethel-Thompson threw for 303 yards in his first start of the season.

At Ottawa, the Redblacks (2-1) look to get back on track following last week's road loss in Winnipeg. They had the ball for just under 21 minutes versus the Bombers, managing 258 net offensive yards. Montreal (1-3) will definitely be brimming with confidence following last week's home win over Hamilton. Alouettes starter Vernon Adams Jr. was 14-of-25 passing versus the Ticats for 202 yards and also ran for a TD.

Note to readers: This is a corrected version of an earlier story. Hamilton lost to Montreal 36-29 last week, not 35-29 as previously stated. Also, Sean Thomas Erlington is not a rookie.

Major League Soccer teams head to Florida, albeit in stop-start fashion
Jul 3, 2020 7:01 PM
Canadian Taylor Pendrith one shot back heading into final round
Jul 3, 2020 7:00 PM
Comments
We welcome your feedback and encourage you to share your thoughts. We ask that you be respectful of others and their points of view, refrain from personal attacks and stay on topic. To learn about our commenting policies and how we moderate, please read our Community Guidelines.