MONTREAL — The Montreal Impact are quite thankful Saphir Taider isn't away with his national team. A brace from Taider powered the Impact to a 2-1 victory over the Seattle Sounders Wednesday night at Saputo Stadium.
0
Jun 5, 2019 10:51 PM By: Canadian Press 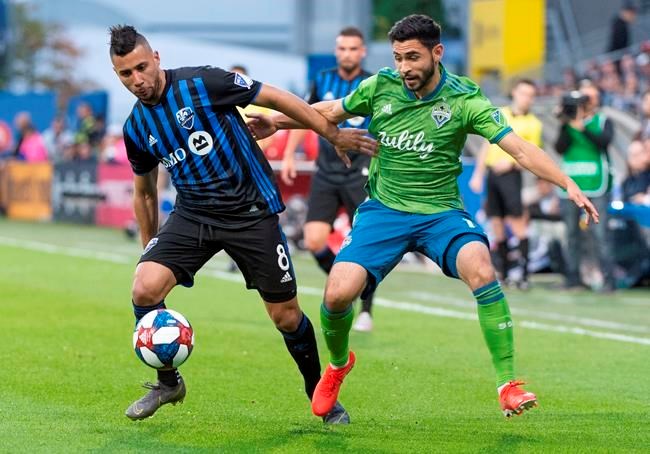 MONTREAL — The Montreal Impact are quite thankful Saphir Taider isn't away with his national team.

A brace from Taider powered the Impact to a 2-1 victory over the Seattle Sounders Wednesday night at Saputo Stadium. The midfielder scored both goals within four minutes in the second half.

"We can't leave this match without winning, that's what I said before the match." Taider said.

The Algerian midfielder was excluded from his home country's African Cup of Nations squad, meaning he was available for Montreal Wednesday night unlike 10 other Impact players who were either injured or away for national team duties.

Wednesday's match was the Impact's first since their 3-0 home drubbing at the hands of Orlando City SC Saturday afternoon, in which Impact (8-7-3) manager Remi Garde was displeased with his team's performance.

"If you compare this game and the last one we played against Orlando, the team spirit was different," Garde said. "Nothing was perfect tonight, but it was much better."

"It was really big for us to get this win," midfielder Micheal Azira added. "We needed it."

Seattle (7-4-5) drew first blood in the 64th minute after drawing a penalty following a Victor Cabrera foul. Midfielder Victor Rodriguez buried the ball in the top right corner past Bush for his second goal of the season.

The Impact tied the game in the 74th minute when they drew a penalty of their own. Taider's first of the night equalized the game at one goal apiece.

Four minutes later, Taider scored his second of the night and seventh on the season. Panamanian winger Omar Browne fired the ball in Taider's direction from outside the penalty area before the Algerian deflected the ball off his knee and past Stefan Frei for his seventh of the season.

Taider was convinced that Browne meant to fire a shot on target.

"I thought the ball was coming at me pretty quickly," Taider said. "I thought he was shooting it at me."

The Impact had two shots from defender Victor Cabrera and Azira in a scoreless first half, but neither chance troubled Frei.

Impact forward Maxi Urruti had the team's first shot on target in the 60th minute. Teammate Shamit Shome crossed the ball into the penalty area, and the Argentinian volleyed it into Frei's chest.

It's the final game for Montreal before the Impact take their international break. The Impact return to action June 26 against the Portland Timbers at Saputo Stadium. Seattle will host a U.S Open Cup tie against Portland June 12, before returning to Major League Soccer action June 29th against the Vancouver Whitecaps.

The Impact and Sounders entered Wednesday night's game short of a full 18-man roster. The Sounders had 10 players away on international duty, while the Impact were missing four players to national team duties and six others to injury.

Omar Browne was announced to Panama's Gold Cup squad prior to Wednesday night's match, but he was still available to play for Montreal.

Homegrown defender Karifa Yao was signed to a first-team contract, while Ottawa Fury midfielder Luca Ricci was called up to the Impact as reinforcements. Youngster Daniel Kinumbe also made his first ever start for the Impact.