The 2020 NFL draft is over but won't be easily forgotten by Canadian Nathan Rourke. The six-foot-two, 209-pound Ohio University quarterback was bypassed in the draft then unsigned as a priority free agent. So the 21-year-old native of Oakville, Ont.
Apr 28, 2020 6:42 PM By: Canadian Press 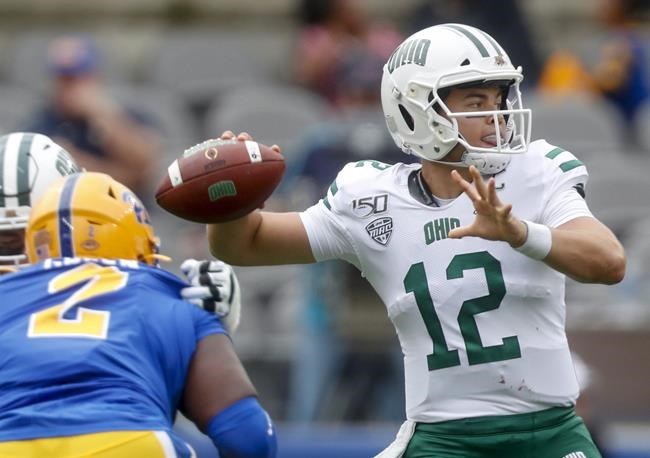 The 2020 NFL draft is over but won't be easily forgotten by Canadian Nathan Rourke.

The six-foot-two, 209-pound Ohio University quarterback was bypassed in the draft then unsigned as a priority free agent. So the 21-year-old native of Oakville, Ont., will now look to the CFL draft Thursday.

Rourke is excited about the prospect of playing pro football in Canada but the disappointment of the NFL draft will definitely linger.

"I think it might've been a good surprise if I had got drafted," Rourke said Tuesday during a telephone interview. "But . . . to not get picked up at all is a little bit of a shock.

"For sure, it gives me an extra thing to think about. It isn't going to be something I'll be able to brush off just pretty easily."

Rourke isn't completely shutting the door on the NFL, adding playing in the CFL could result in an opportunity there later on. But Rourke heads into Thursday's draft not being bound to a franchise south of the border.

"I think he became more attractive," said John Hufnagel, the Calgary Stampeders' president/GM who currently has the first overall pick Thursday. "Nathan is a very skilled quarterback in a lot of areas.

"He's a very athletic young man . . . the coaches down there did a lot of things with him and he can do those type of things here also."

Rourke is also the only recipient of the Jon Cornish Trophy, given annually to the top Canadian player in the NCAA ranks, winning the first two awards in 2018 and 2019. He's a finalist again this year, with the winner being named next month.

That versatility could be enticing for a CFL team looking to use Rourke much like the Grey Cup-champion Winnipeg Blue Bombers did Chris Streveler. The six-foot-one, 216-pound Streveler threw for 2,698 yards and 19 TDs while rushing for 1,167 yards and 22 touchdowns over two seasons in Canada before signing with the NFL's Arizona Cardinals on Feb. 4.

"I don't mind, especially early in my career, to be asked to do those things, kind of like a Chris Streveler, because I do think I'm capable of doing those things," Rourke said. "But I don't want to make a living doing that.

"I'd love to get the shot at quarterback. I'd like to be able to become a quarterback, become a franchise quarterback and leader of a program and team."

When Rourke hears his named called Thursday, it will end months of uncertainty. And he's looking forward to that and finally having a team.

"I'm really itching to get started, to have a plan and a team," he said. "I'd like to get going and start being able to work towards something."

The COVID-19 pandemic has created no shortage of uncertainty in pro sports, with major North American leagues having all shut down indefinitely. The CFL hasn't been immune, having postponed the start of training camps (which were to begin next month) and pushed back the proposed June 11 start the regular season to early July, at the earliest.

But Rourke said he's learned to take the uncertainty caused by the novel coronavirus outbreak in stride.

"Yeah, I've got a pretty good handle on it," Rourke said. "It's just funny because COVID-19 kind of added just another layer to this whole process, which is already uncertain."

In a perfect world, being drafted by one of the CFL's three Ontario franchises would allow Rourke to play close to home, although he also has family in B.C. But of more importance is landing in the best possible situation.

"I'd love to go to a team where I'm going to have the opportunity to make a roster and be able to contribute right away," he said. "I understand it's not realistic to be able to go in and say, 'Hey, I want to go compete for a starting job,' because the talent at quarterback is very high in the CFL.

"But I'd like to be in a position to start somewhere soon in the future."