MONTREAL — Quebec Health Minister Danielle McCann says the government is evaluating whether to allow the world figure skating championships to go ahead next week in Montreal.
Mar 9, 2020 7:52 PM By: Canadian Press 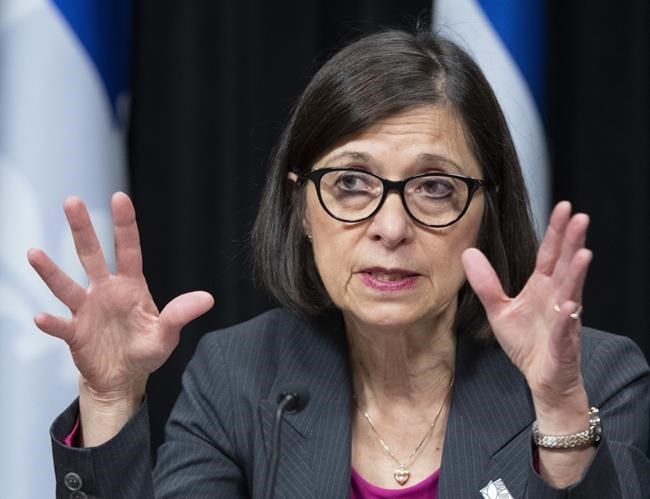 MONTREAL — Quebec Health Minister Danielle McCann says the government is evaluating whether to allow the world figure skating championships to go ahead next week in Montreal.

Her comments Monday come after the International Ice Hockey Federation on Saturday cancelled the women's world hockey championship scheduled to take place in Nova Scotia from March 31 to April 10 because of the spread of the novel coronavirus. Hockey Canada said Nova Scotia health officials recommended the event not be held at the scheduled time in a letter to the sport's governing body.

McCann said provincial public health and public security officials are involved in the analysis of the March 16-22 figure skating event, with input from the Public Health Agency of Canada.

She says cancelling the competition has not been ruled out, and a decision will be made as quickly as possible.

"We have to do a case-by-case analysis of the events, but we are aware that we need to make a decision rapidly concerning the (figure skating event) ... What I want to say is a decision needs to be taken as quickly as possible," McCann said.

In a statement Monday, Skate Canada "said the event is scheduled to take place as planned.

"As the situation is changing quickly, we continue to monitor new developments of the evolution of COVID-19 in co-operation with the ISU and will follow the recommendations provided by the World Health Organization and the Public Health Agency of Canada," the statement said.

Figure skaters still are preparing for the event.

Canadian Kirsten Moore-Towers, who is in the pairs competition with Michael Marinaro, said she's not worried about a possible cancellation.

"Of course we've seen that other events are being cancelled, but honestly we really enjoy training and we enjoy training these programs, so regardless we would be devastated of course if the event got cancelled. But we do trust the people that make these decisions and we know that they will make the decision (that's) best for us.

"Of course we wouldn't want anyone's health to be at risk for us to compete in a figure skating competition, so if the extreme was that much that that had to happen, we would understand, but we don't foresee that happening."

The other major winter world championship event in Canada also remains on schedule for now. The women's world curling championship is slated to start on Saturday in Prince George, B.C.

A World Rugby Sevens event went on as scheduled this past weekend in Vancouver.

Meanwhile, Canada's Olympic and Paralympic swim trials scheduled for March 30 to April 5 in Toronto still have the green light for now.

"You make decisions now, it could be very different in a week and two weeks time even."

"It's highest on our list of issues to keep tracking."

A decision was made to not send Canada's open-water swimmers to this past Sunday's LEN Open Water Cup in Israel, Atkinson said.

International swimmers intending to compete at Canada's trials were advised in a memo from Swimming Canada chief executive officer Ahmed El-Awadi that they may be denied entry into the country "based on travel history over the past several months. This information is changing rapidly."

World champion canoeist Laurence Vincent Lapointe, from Trois-Rivieres, Que., is currently training in Florida in preparation for the Summer Olympics in Tokyo.

She was recently cleared of a doping violation, having proved she was contaminated by an ex-boyfriend.

"I'm careful," Vincent Lapointe said. "I don't put my hands to my mouth for no reason and I wash my hands regularly.

"With what happened to me with contamination ... I'm even more careful than I was.

"I don't think I'm going to come into contact with someone who has coronavirus right here. That said, when I'm going to travel, am I going to be more careful and maybe even have a mask as a precaution? Maybe."

Tokyo's organizing committee and the International Olympic Committee insist the event scheduled to open July 24 will go ahead.

Vincent Lapointe hopes that is the case.

"One of the things that allowed me to get through what happened to me is the idea, the thought, that I could make it, that I could give it everything I've got and go to the Olympics and win," she said.

"I don't know what I would do they decided to remove the Olympics.

"I would be very, very, very disappointed if they stopped us from going to the Olympics."

Also, the NBA, NHL, Major League Baseball and Major League Soccer are closing access to locker rooms and clubhouses to all non-essential personnel in response to the coronavirus crisis. The leagues made the announcement in a joint statement Monday night.

In Toronto, Maple Leafs players and coaches were brought to a podium for questions after practice Monday. In Montreal, Canadiens players came outside the locker-room for scrums with reporters.

After the Canucks' last game Sunday in Vancouver, players also did interviews outside the locker-room.

"I don't really think about it a whole lot other than just wash my hands and use a sanitizer more frequently than I do," Leafs captain John Tavares said. "I haven't changed the way I approach every day or the way I live my life. We're (not) experts. We just take the advice that's given to us."

Meanwhile, the Canadiens said in a statement Monday that sanitizing measures at Bell Centre have been enhanced, and that the arena now has over 200 sanitizer dispensers.

Sports events around the world have been affected by the coronavirus.

On Monday, the Italian Olympic Committee suspended all sports in the country through April 3. Less than 24 hours earlier, the BNP Paribas Open, considered one of the top tennis tournaments outside the Grand Slams, was cancelled in Indian Wells, Calif.

There also have been some events played without fans.

"No question you want to play with people in the building," Tavares said. "There's a lot of circumstances that go into to it. I hate playing the 'what if' game because I truly believe and hope we don't get to that point. It's obviously a big part of the game playing in the buildings we play in with the people that can watch us play."

— With files from Stephanie Marin and Alexis Belanger-Champagne in Montreal, Donna Spencer in Calgary and Lori Ewing and Joshua Clipperton in Toronto.

This report by The Canadian Press was first published March 9, 2020.

Storm advance to finals; Aces force Game 5 against Sun
Sep 27, 2020 6:09 PM
Comments
We welcome your feedback and encourage you to share your thoughts. We ask that you be respectful of others and their points of view, refrain from personal attacks and stay on topic. To learn about our commenting policies and how we moderate, please read our Community Guidelines.