MONTREAL — It was a chance for Montreal to stay in front in its playoff race. But the game quickly descended into a chorus of boos and jeers from the home fans. D.C.
Aug 31, 2019 11:16 PM By: Canadian Press 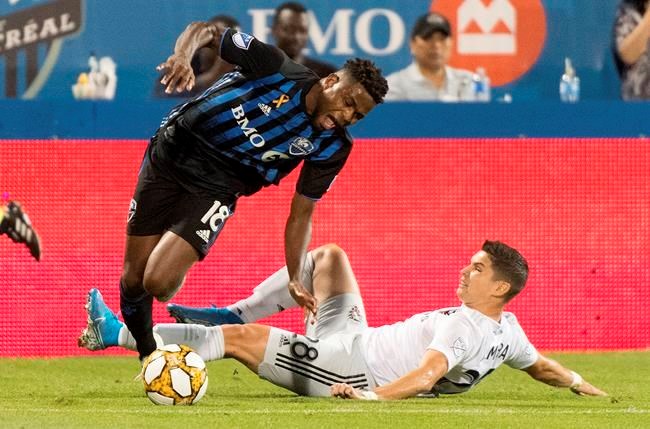 MONTREAL — It was a chance for Montreal to stay in front in its playoff race. But the game quickly descended into a chorus of boos and jeers from the home fans.

D.C. United scored three goals in a 12-minute span in the first half to blank the Impact 3-0 on Saturday night in a crucial Eastern-Conference showdown.

After the third goal, many of the 18,285 frustrated fans in attendance at Saputo Stadium voiced their displeasure with the home team.

“They have every right to be vocal,” said defender Daniel Lovitz of the fan reaction. “We hear it and it certainly doesn’t help but we’re not helping ourselves very much at the moment. I can’t imagine what it’s like to be a fan right now. It’s a rollercoaster and it feels like it’s been that way for a little while.

“We’re trying to bring positive consistency and this wasn’t a step in the right direction and we deserve to hear it.”

The slumping Impact (11-15-4) have lost eight of their last 11 MLS matches and fell below the playoff line into eighth place. Seventh-place Toronto FC leads the Impact by one point and has two games in hand.

Montreal has four matches left to play this season — three of those are at home.

The Impact played better after going down 3-0 but they never really threatened in the final third. Montreal outshot D.C. 25-7 but only managed four shots on goalkeeper Bill Hamid, who earned his 10th clean sheet of the season.

“We cannot make excuses about it,” said Impact coach Wilmer Cabrera. “We put a lot of effort but we couldn’t get to the final. It was a lot of good crosses, a lot of good possibilities. At the end, we have to put the ball in the net. They attacked three times, they put three goals. They made the difference with that.”

Replacing their suspended captain Wayne Rooney up top, Kamara got the visitors on the board in the 20th minute. After a Junior Moreno free kick ricocheted off Orji Okwonkwo, the ball fell right to an unmarked Kamara in the box for the opener.

The visitors made it 2-0 three minutes later when Montreal’s Samuel Piette headed Hamid’s towering goal kick right into Arriola’s path. The winger took the ball in his stride and beat Evan Bush with a left-footed shot into the bottom corner for his sixth of the season.

Another poorly defended set piece sunk the Impact when D.C. United scored off a Felipe corner kick in the 32nd minute. Defender Frederic Brillant headed the ball across the box to Kamara, who headed it past Bush for his fourth career goal against Montreal.

The Impact have conceded 14 times this season off a corner or free kick.

“Three really bad goals,” said Lovitz. “Really tough to game plan for that or even talk about it to try not to do that stuff. Very disappointing to put ourselves in a hole very early on at home in a game that was very important to us.”

The match was reminiscent of last year’s key meeting between Montreal and D.C. at the end of September. United won that match 5-0, which ultimately led to the Impact missing the playoffs.

Following a 0-0 draw at Audi Field earlier this season, Montreal has now gone 355 minutes without scoring against D.C. United.