NEW YORK — The Toronto Maple Leafs are beginning to show that they can be an elite team in the Eastern Conference.
0
Dec 20, 2019 10:59 PM By: Canadian Press 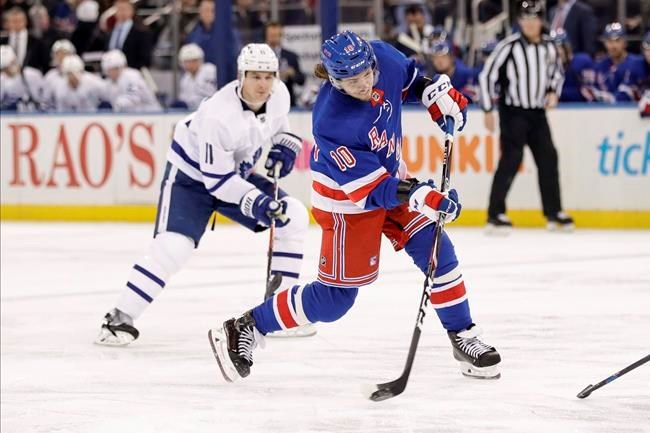 NEW YORK — The Toronto Maple Leafs are beginning to show that they can be an elite team in the Eastern Conference.

William Nylander and Mitchell Marner each scored their second goal of the game early in the third period to help the Maple Leafs beat the New York Rangers 6-3 on Friday night.

“There were a lot of really good signs for our team in terms of how we retain the puck, which I thought was a real key to this game in particular,” Toronto coach Sheldon Keefe said after Toronto improved to 9-4-0 with him behind the bench. “When their team has the puck, they are a tough team to deal with. I thought we handled that well.”

Nylander scored a third-period, go-ahead goal when he sent a wrist shot past Georgiev at 2:10 of the final period, giving Toronto a 4-3 lead.

“They are a good team, we didn’t do what we talked about in the third,” Rangers alternate captain Jesper Fast said. “We want to play better at home, it’s disappointing.”

Less than a minute later, Strome had a dreadful turnover that Marner capitalized on. The 22-year-old forward pushed the Leafs' lead to two with his eighth goal of the season at 2:57.

Buchnevich snapped a nine-game goal drought when his wrist shot went through the legs of Andersen at 5:27 of the second period, tying the game at 3-all. Tony DeAngelo picked up his 17th assist of the season on the play. He leads Rangers in points with 24.

Marner gave Toronto a 3-2 lead at 2:50 of the second period when he scored a power-play goal on a two-man advantage. Skjei attempted to break up a pass intended for John Tavares, but redirected the puck past Georgiev.

“We want to score on our opportunities,” Maple Leafs captain John Tavares said. “We want to continue to put the pressure on, play our type of game, keep the puck, create the chances when we can get them and capitalize when we get our opportunities. Obviously, we want to create as many as we can."

New York recovered from a sluggish start with two goals in the second half of the first period to knot the score at 2-2.

Skjei inadvertently notched his fifth of the season when a failed deke from the top of the crease trickled past Andersen. Mika Zibanejad recorded his 100th assist as a member of the Rangers on the play and Chris Kreider received credit for the other assist.

Strome evened the score with an easy tap-in 3:47 after the Skjei goal. Artemi Panarin picked up the primary assist as he extended his individual point streak to six games. He has found his way onto the score sheet in 23 of the previous 27 games. Buchnevich also assisted the Strome goal.

The Maple Leafs jumped out to a two-goal lead in the first 12 minutes of the opening period.

Justin Holl completed a give-and-go with Mikheyev at the top of the left circle to set up the scoring opportunity. Then, Holl slid a pass through Jacob Trouba and found Engvall alone in the slot. It was Engvall’s second goal since making his NHL debut on Nov. 19 against Vegas.

Toronto doubled its first-period advantage when Nylander recorded his 12th of the season at 11:52. Trouba was caught watching the puck as Nylander cleaned up a rebound in front uncontested. Kasperi Kapanen assisted on the play.

Mikheyev scored his seventh of the season at 16:23 of the third period when Georgiev couldn't snag the puck with his glove.

NOTES: The Rangers have scored three or more goals in 16 of the last 22 games. … The Rangers are the only NHL team that has had eight players 21 years old or younger appear in at least one game in 2019-20. … Brett Howden skated in his 100th NHL game Friday. … New York scratched Libor Hajek and forward Micheal Haley. … Toronto scratched forward Adam Brooks and Martin Marincin.

Hulking lineman Derek Dennis has experienced racism while playing in Canada
Jun 3, 2020 5:46 PM
Comments
We welcome your feedback and encourage you to share your thoughts. We ask that you be respectful of others and their points of view, refrain from personal attacks and stay on topic. To learn about our commenting policies and how we moderate, please read our Community Guidelines.