While other sports leagues wonder how to stay afloat or resume play during the global pandemic, the National Rugby Football League says it continues to plan its launch.
Apr 28, 2020 5:26 PM By: Canadian Press 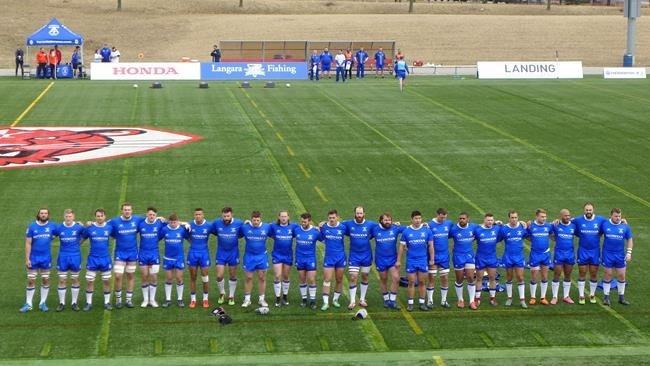 While other sports leagues wonder how to stay afloat or resume play during the global pandemic, the National Rugby Football League says it continues to plan its launch.

There are more questions than answers about the proposed North American rugby union league at present. But commissioner Michael Clements, who envisions starting in 2022 with teams in eight American cities, is long on confidence.

He also exhibits no small patience.

Clements and George Robertson, now no longer with the NRFL venture, were talking up a new rugby league back in 2013.

"As they say in Hollywood ... they say that overnight success in the entertainment business merely means that you've been at it a number of years," Clements said in an interview.

"You take the time that's necessary to do it right. That's what going on here."

Clements, a lawyer, says he fell in love with rugby and started to wonder "why isn't this great game played at a high level in the U.S.?"

"We have athletes, we have stadia, we have fans and we have money unparalleled," he added.

But the venture's attempts to stage one-off games featuring a U.S. all-star side against London Irish in 2013 at Gillette Stadium in Foxborough, Mass., and Leicester Tigers in 2015 at Philadelphia's Lincoln Financial Field fell through. USA Rugby, the sport's governing body south of the border, refused to sanction the 2015 game.

A 2015 game in New Orleans, organized by Clements' group, between developmental sides from New Zealand's Crusaders and England's Saracens was also scrapped.

Still, the NRFL insists it has big-spending plans, saying its salary cap will be competitive with the international rugby market, citing the US$9-million salary cap for England's Gallagher Premiership Rugby.

That is 18 times the salary cap of Major League Rugby, the existing pro league in North America that includes the Toronto Arrows.

The 12-team MLR announced March 19 that it was cancelling the remaining matches of the 2020 season — its third — because of the global pandemic. Earlier this month the Colorado Raptors said they were withdrawing from the league.

The MLR is home to some 50 Canadians.

The NRFL, headquartered in Minneapolis, will take the form of a single-entity group, according to Clements. This week, it announced the establishment of the NRFL Founders Group to launch the league — saying the Founders Group will own "an undivided and non-dilutable interest" in all of the founding eight teams.

While Clements says he has interest from people involved in the NFL and Major League Baseball and already has Founders Group investors, he declines to identify them citing the U.S. Securities and Exchange Commission.

"There are certain things that we cannot talk about publicly," he said.

Clements says he is moving forward despite the pandemic that has paralysed sports.

"We are not cavalier about what's going on out there with the virus," he said. "The beautiful thing where we are at right now, we are in a build mode. I always refer to us as the 'crouching tiger.' We're ready to pounce. While others are retreating in a survival mode, we are in a building mode."

Clements envisions league combines in the late fall this year and training in spring 2021, with South Africa a potential venue because of its "hardcore rugby" environment.

He is looking to stage some exhibition games against international opposition in the summer of 2021 in U.S. markets.

"We will be climbing in the ring with the heavyweight contenders to show that we deserve to be there," Clements said.

The blueprint calls for 2022 for "full-on league play" with future expansion, including into Canada.

Asked if he was concerned at getting USA Rugby approval for exhibition games, Clements noted the governing body is currently going through bankruptcy proceedings.

"We greet anybody with open arms, whether it be USA Rugby, World Rugby. But we know the mission that we're on and we know the level of play that we are bringing to North America."

Asked about the NRFL, USA Rugby said it "has had no recent connectivity with representatives of the proposed National Rugby Football League, nor have we been approached."

"At this stage, USA Rugby remains focused on urgent union matters and supporting the continued growth of Major League Rugby," it added in a statement.

Rugby Canada did not immediately respond to a request for comment on the NRFL.