Notes from Game 3 of the NBA Finals 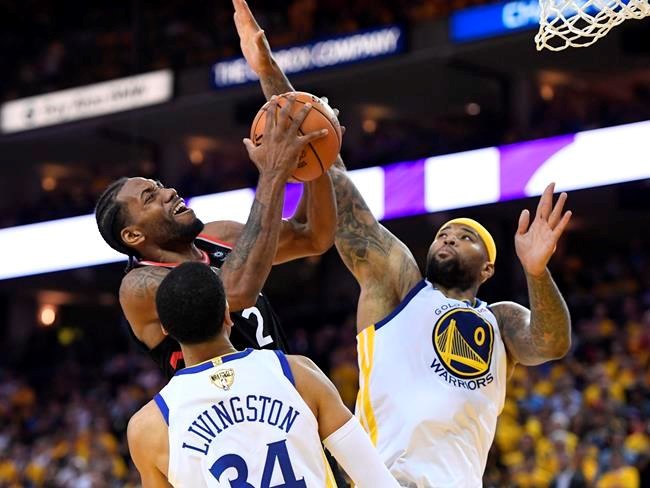 Some notes on Game 3 of the NBA Finals after the Toronto Raptors' 123-109 win over the Golden State Warriors on Wednesday night:

— Golden State's Stephen Curry scored a playoff-career-high 47 points. His previous post-season high was 44 points against the San Antonio Spurs on May 6, 2013.

— Curry finished with the eighth-highest-scoring game in NBA Finals history, and the second most in a loss.

— The Warriors used their 10th different starting lineup of the 2019 playoffs, the most in a single post-season since starters and reserves began being tracked in the 1970-71 season.

— The Raptors’ Kawhi Leonard (30 points) recorded his 13th game with at least 30 points in the 2019 playoffs. The only players to have that many 30-point games in a single post-season are Michael Jordan (four times), Hakeem Olajuwon, Shaquille O’Neal, Allen Iverson, Kobe Bryant (two times) and LeBron James (two times).

— Kyle Lowry broke Toronto’s franchise record for career field goals made in the playoffs, surpassing DeMar DeRozan (397). Lowry has made 398 field goals with the Raptors.

— Toronto's Fred VanVleet (11 points) came off the bench to score in double figures for the sixth straight game. He is averaging 15.2 points in those six games.

Toronto Arrows go 2-0-0 in Major League Rugby with win over Houston SaberCats
Feb 16, 2020 4:45 PM
Comments
We welcome your feedback and encourage you to share your thoughts on this story. We ask that you be respectful of others and their points of view, refrain from personal attacks and stay on topic. To learn about our commenting policies and how we moderate, please read our Community Guidelines.