PARIS — Prepping in the relative warmth of a gym before heading out with leggings and long sleeves to make her French Open debut against the tournament’s No. 9 seed, Coco Gauff got a pep talk from Dad.
Sep 27, 2020 5:28 PM By: Canadian Press 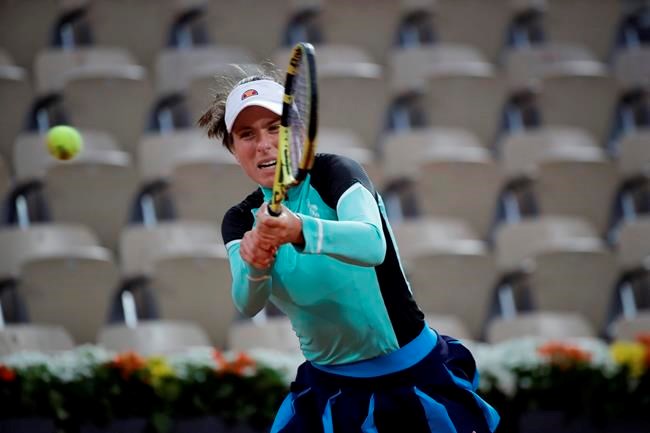 PARIS — Prepping in the relative warmth of a gym before heading out with leggings and long sleeves to make her French Open debut against the tournament’s No. 9 seed, Coco Gauff got a pep talk from Dad.

“His goal was to become an NBA player, and he didn’t make it. He told me: ‘You’re living your dream. Not everybody gets to do that. Just have fun on the court.’ That really changed my perspective,” the 16-year-old Gauff recounted. “I was really nervous going into the match. That just calmed me down. I realized it’s just a tennis match. I’m doing some things that people wish they could do.”

On a rather unusual start to things at Roland Garros — postponed because of the coronavirus pandemic, Day 1 arrived in September instead of May, with only 1,000 spectators allowed instead of more than 30,000 as COVID-19 cases rise in France — Gauff offered the latest proof that she can do most of what she wishes to on a tennis court.

Using forehand slices to throw off her older, more experienced opponent, and unbothered by her own 12 double-faults, Gauff stayed steady at the most crucial moments to beat Johanna Konta 6-3, 6-3 and reach the second round. This was already Gauff’s fourth victory over an opponent ranked in the Top 20.

Such a far cry from last year’s French Open: Gauff failed to make it out of qualifying, while Konta was making her way to her third Grand Slam semifinal.

Soon after, Gauff had her breakthrough at Wimbledon, becoming, at 15, the youngest qualifier ever there on the way to the fourth round. She also made it to the fourth round at this year’s Australian Open, beating 2019 champion Naomi Osaka en route.

Only recently was there a bit of a bump in the road for Gauff: She lost four of five matches before arriving in Paris, including a first-round exit at the U.S. Open.

Gauff joked afterward about having grown up in Florida and Georgia and not being accustomed to the sort of weather this French Open is being played in, with drizzles and temperatures in the 50s Fahrenheit (low teens Celsius).

She figured she hadn’t competed with so many layers of clothing on since she was 10. OK, not that long ago in the scheme of things, but still.

Konta, a 29-year-old from Britain who showed up to her news conference wearing a puffy red coat, observed: “Kind of as rainy and windy and rubbish weather like it is at home.”

They were not among the lucky few who got to play in the main stadium, Court Philippe Chatrier, which now boasts a $55 million retractable roof, making the French Open the last Grand Slam tournament able to hold matches indoors when it pours.

“It was much better, because we could play,” said top-seeded Simona Halep, who stretched her winning streak to 15 matches by defeating Sara Sorribes Tormo 6-4, 6-0, “and the rain didn’t stop us at all.”

Over at Lenglen, U.S. Open runner-up Victoria Azarenka did not hide her displeasure when she was told to remain on court instead of seeking shelter in the locker room while play was delayed because of a drizzle.

“I am going to get frozen,” Azarenka said during her win. “No. I’m not waiting here a couple of minutes, because I’m cold. It’s 8 degrees -- 8 degrees! I live in Florida. I am used to hot weather.”

So much is different this time.

The conditions. The mostly empty stands -- “Having no fans stinks,” said John Isner, the 21st-seeded American, who won Sunday. The new, heavier tennis balls. The lack of match play coming in.

Maybe that contributed to some of the results.

Jannik Sinner, a 19-year-old from Italy, eliminated No. 11 David Goffin, while other men’s seeded losers included U.S. Open quarterfinalist Borna Coric, No. 25 Alex De Minaur and No. 32 Dan Evans. No. 17 Anett Kontaveit and No. 24 Dayana Yastremska left the women’s bracket.

One of the day’s most lopsided scorelines came in one of the most-anticipated matchups: Stan Wawrinka beat Andy Murray 6-1, 6-3, 6-2 in the first meeting between male Grand Slam champions in the first round at Roland Garros since 1999.

“Even if I played very well, it would have been no guarantees that I win that match,” said Murray, who has had two hip operations. “But I also didn’t play well.”

Neither, truthfully, did Konta, and she acknowledged as much afterward.

When Konta could have made things more difficult for Gauff, it was the veteran who wavered, the kid who steeled herself.

They played a 10-minute game at 5-3 in the first set, and Gauff held on there. Then, after Konta jumped out to a 2-0 edge in the second set, Gauff reeled off five consecutive games. Even after Konta made one last stand by breaking when Gauff served for the match at 5-2, the American broke right back to end it.

Konta shrugged off the notion that it entered her mind that she was facing — and losing to — someone so young.

“It doesn’t really matter how old she is,” Konta said. “The age and those things, I think that’s a factor for you guys and for public interest and for sponsors and for things like that. But as a fellow competitor, that’s got nothing to do with us competing out on court.”