NHL coaches eager to spread knowledge: 'Giving back to the hockey community'

Ken Hitchcock remembers eagerly attending coaching symposiums in the late 1970s and early 1980s. The goal was simple: soak up as much hockey information as possible.
Apr 29, 2020 11:55 AM By: Canadian Press 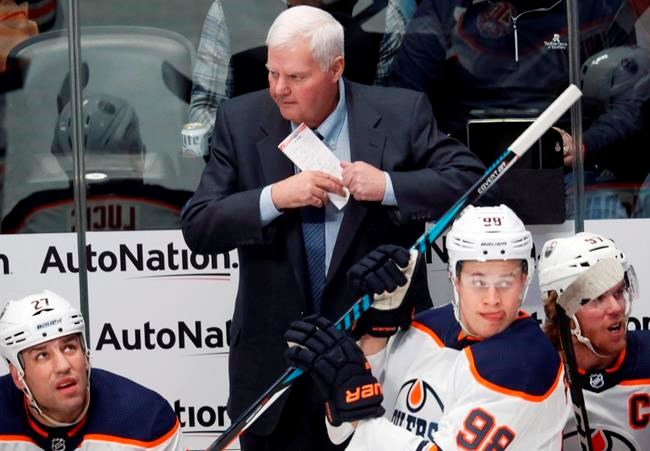 The goal was simple: soak up as much hockey information as possible.

Summer seminars lasting up to a week — the programs were held at universities and attendees stayed in dorms — provided a window into some of the game's most progressive minds, including Clare Drake, George Kingston, Dave King and Wayne Fleming.

"I called them the 'Group of the Four,'" Hitchcock recalled recently. "All day you would have presenters talk about everything from X's and O's to practices to picking captains. That group of coaches was so far ahead of the curve that you felt when you left you had a leg up on everybody.

Thanks to an assist from the NHL Coaches' Association, Hitchcock and other bench bosses to reach the pinnacle of their profession have had the opportunity to pay that forward.

And in 2020, all a coach looking to get ahead needs is a laptop or iPad — no cramped dorms or cafeteria food required.

The platform allows NHL coaches to deliver presentations remotely to large groups, with each webinar recorded and made available to those unable to attend the live event.

The NHLCA says over 3,000 participants from more than 30 countries have taken part in program, which wrapped with its 22nd and final presentation Wednesday.

Hitchcock, who spent more than two decades as an NHL head coach and is now an adviser with the Edmonton Oilers, focused his presentation on effective communication and leadership.

"You can have all the knowledge in the world, you can know every drill in the world," said Hitchcock, winner of the Jack Adams Award as NHL coach of the year in 2011-12 and third all-time with 849 regular-season victories. "But if you don't know how to build a team, and how to get it to function properly, you'll never have success.

Boston Bruins head coach Bruce Cassidy, meanwhile, discussed his rise from the minors to the NHL and the importance of networking at lower levels.

"It's a little bit of giving back to the hockey community, we were all there at some point," he said. "I've always considered myself a teacher. Every guy has different teaching methods. It's always up for debate what's the best way.

"We like talking about the game and putting our spin on it."

David Cunniff, head coach and general manager of the Worchester Railers of the third-tier ECHL, was amazed at how much his NHL brethren are willing to share.

"You learn these things over years and years of studying video, trial and error for what works and what doesn't," said Cunniff, who spent 18 seasons as an assistant/associate coach in the American Hockey League. "To be as open as everyone has been, it's just amazing."

The NHLCA has also started a webinar program that pairs NCAA women's coaches with an NHL counterpart this week, and will hold a five-day online clinic in June to replace of its annual live event at the draft, which has been postponed because of the novel coronavirus.

"A tremendous reflection on the coaches and how much effort that they've put in with little coming in return," said Liz Keady Norton, associate coach with Boston University's women's program. "It's a pretty selfless act that's helping a huge number of people."

Columbus Blue Jackets assistant coach Brad Shaw, who did a deep dive on penalty killing, said he enjoyed the back-and-forth with coaches during the question-and-answer period.

"There's a guy from the Slovakian league, a bunch of guys from almost every level you can think of," he said. "That's been a real neat thing to come out of it, just the wide cross-section you can touch.

"It's always important to keep that pipeline of information going."

Shaw said every coach in the NHL had doors opened long before they were members of the union.

"I've never considered myself an NHL coach," he said. "I'm just a coach that's been fortunate enough to work in the NHL. It's a way to give back and try and pave the way for somebody else."

"It's inspirational to hear new ideas or an old idea twisted around into a new way of thinking," Hamre said. "You can apply the information today, next season or in three, four or five seasons down the road."

Jim Corsi, who had a long career as goalie coach for the Buffalo Sabres and now works in the Columbus Blue Jackets' organization, was only too happy to pitch in with a seminar on skills and tracking for netminders.

"Being a coach is a special responsibility," Corsi said. "If I can share my experiences on how to teach, what to teach in my specialty, I'm all for it."

Winnipeg Jets assistant Jamie Kompon's talk centred around breakouts, but he also tuned into the other talks in hopes of gleaning information from his contemporaries.

"It's such a fluid game now," he said. "Any little bit of advice or tips or seeing how someone else is working is always good.

"Everyone's excited about the opportunity to pass our knowledge on."

Hitchcock said considering where most NHL coaches started, it's simply the right thing to do.

"You feel like you owe a lot of people a debt of gratitude for giving you the opportunity," he said. "I started coaching for a living in 1984 and I'm grateful to all the people who allowed me to do something I love so much.

The aspiring coaches on the other end of these presentations — like Hitchcock some four decades ago — would likely argue it's much bigger than that.