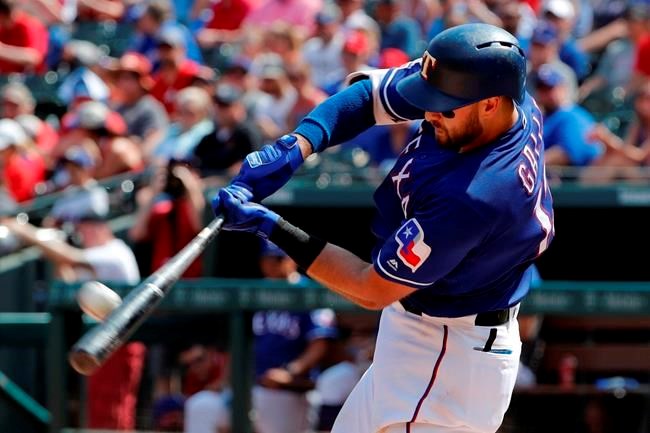 The cancellations come amid delays around Major League Baseball, with some players opting out, and in the aftermath of Nationals reliever Sean Doolittle criticizing slow test results and a lack of some personal protective equipment.

“Without accurate and timely testing, it is simply not safe for us to continue with summer camp,” Washington general manager Mike Rizzo said. "Major League Baseball needs to work quickly to resolve issues with their process and their lab. Otherwise, summer camp and the 2020 season are at risk.”

Astros general manager James Click said the delay in testing results and the contagious nature of the coronavirus led to the decision to cancel a full day of workouts.

“Despite these delays over the holiday weekend, we’re optimistic that this process will be ironed out and we’ll be back on the field and ready to compete for a championship soon,” Click said.

Hours later, the Astros said they had received the delayed test results and would work out Tuesday.

MLB said in a statement that 95% of its intake testing had been completed and the Utah laboratory it's using had reported 98% of results, a majority of those a day after samples were collected. MLB said it addressed delays caused by the holiday weekend, doesn't expect them to continue and commended teams for workouts.

But frustration is building around the majors over testing delays.

“We got camps being shut down and people going three and four days without tests. You just don’t know what’s going on," Los Angeles Dodgers star Mookie Betts said. "And I know it’s hard. I’m not blaming or saying this, that and the other. It’s hard. But somebody’s got to do it. And we have to just figure out the right way to do it.”

The Los Angeles Angels were forced to collect their own saliva samples Sunday when testers didn’t show up at their training complexes in Anaheim or Long Beach. They also delayed their workouts Monday to accommodate the testers, eventually turning their usual morning drills into an optional afternoon session.

Angels manager Joe Maddon believes “this will be a short-lived situation” and pinned the problem on the holiday weekend.

“I want to believe everything will get straightened out relatively soon," Maddon said. "I think it’s just one of those moments that was hard to foresee coming into it, but I’ve got a lot of confidence that it’s going to be fixed.”

The Oakland Athletics finally got on the field for their first full-squad workout Monday night after awaiting test results for position players and Sunday's planned session. The start of Monday's workout at the Coliseum was delayed by more than 90 minutes.

“We are here, everybody who went through the intake process has had their results sent to us and I'm looking down at the field at a bunch of position players. We made it to this point," said A's general manager David Forst, who was frustrated by the process.

“I expect it to get better. ... I think Major League Baseball understands that the number of teams that had issues this weekend, that everybody expects it to return to a normal schedule going forward.”

The Arizona Diamondbacks pushed back Monday's workout a few hours, hoping to get additional results from tests taken on Friday.

“I think if we really want this to succeed, we’re going to have to figure that out,” said Chicago Cubs third baseman Kris Bryant, who voiced concern that some teammates haven't been tested in a week. "If you can’t really nail the easy part, which is right now ... we’ve got a big hill to climb.”

Meanwhile, players continue to test positive or opt out of playing.

“You had to have the mindset that there were going to be some kinks to be worked out," Daniels said. “It’s just not realistic to roll out an operation of this scale on as quick a timeline as we’ve had and not deal with some challenges.”

Multiple Blue Jays players didn’t make the trip to Toronto for training camp after one player tested positive for the coronavirus, according to an official familiar with the matter, who spoke on condition of anonymity because they were not authorized to speak publicly about it. Players who were in contact with the unnamed player will remain in Florida for further testing and take a charter later in the week if cleared.

“We’ve hit some bumpy roads,” Martinez said. "But they’re doing the best they can. I know they are. They’re working on cleaning everything up. We’re in a very, very different situation. No one’s ever done this before. So I know they’re working out all the bugs.”

Doolittle, who is still on the fence about playing this season, said he still hadn't gotten his Friday results back before being tested again Sunday.

“That’s one thing that makes me a little nervous,” Doolittle said. ”We’re not getting tests back in time. They still haven’t sent us the PPE. We’re supposed to have N95 masks, stuff like that, gowns, gloves. We’re supposed to have that stuff, we don’t have that stuff. Those are the things it’s going to take for people to stay safe enough for us to continue this season."

“There’s a lot of hard work that goes into the logistics of setting this up,” Counsell said. “There’s going to be snags in this. I think we all know that. But I’m pleased with how it’s gone so far.”

“I can’t say I’m that confident because I haven’t been shown yet. It’s kind of tough to be confident in something that hasn’t proved to be foolproof,” Betts said. “There’s not a whole lot really I can do; it’s out of my control. But it’s in someone’s control, and whoever’s control it’s in has to find a way to make it work or this whole operation may not be able to work.”

The Cleveland Indians have not had any issues related to testing, but All-Star shortstop Francisco Lindor said it’s vital that teams get equal practice time before the season starts.

“We’ve got to make sure the testing is 99.9% accurate,” Lindor said. “We have to do a better job as players, the union, drug testing people, everybody. If we’re going to make this work, we have to do a better job. There’s no way you can suspend practices. That’s not a fair advantage for anybody. We all signed up to have a 21-day spring training, that’s how we should do it. Everybody should have the same amount of days."

Cam Talbot gets shutout as Calgary Flames beat Dallas Stars 2-0 in NHL playoffs
Aug 15, 2020 2:41 AM
Friday's Games
Aug 15, 2020 1:43 AM
Dalton Kellett and James Hinchcliffe flying Canadian flag at Indianapolis 500
Aug 14, 2020 11:46 PM
Comments
We welcome your feedback and encourage you to share your thoughts. We ask that you be respectful of others and their points of view, refrain from personal attacks and stay on topic. To learn about our commenting policies and how we moderate, please read our Community Guidelines.