SURREY, B.C. — Coach Mark Smith says Canada's women's softball team knows their Olympic fate is in their own hands. The squad dropped a 2-1 decision to No. 5-ranked Mexico at the Softball Americas Olympic Qualifier in Surrey, B.C.
Aug 31, 2019 7:28 PM By: Canadian Press 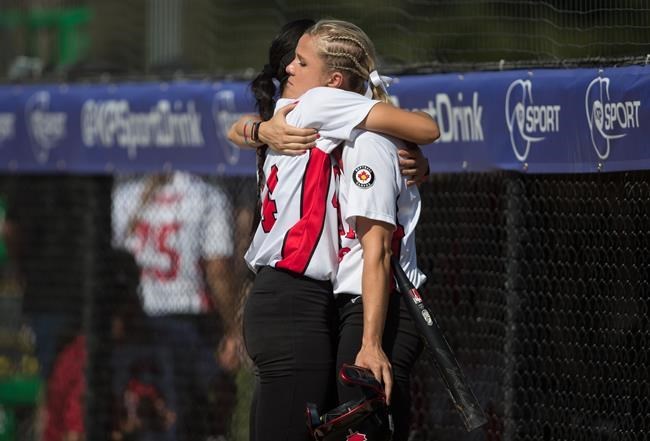 The squad dropped a 2-1 decision to No. 5-ranked Mexico at the Softball Americas Olympic Qualifier in Surrey, B.C., on Saturday, making the road to the Tokyo Games a bit more difficult.

"Certainly this wasn't the route we wanted to go but at the end of the day, we just played seven innings and didn't get the job done and there's nobody to look at but yourself when that happens," Smith said.

"They've now got 24 hours to think about it and mull it over. We need to be better for it."

The victory secured Mexico's spot at next summer's Olympics.

Canada, ranked No. 3 in the world, went into Saturday's game having won every game they'd played in the tournament while not giving up a single run.

That changed in the fifth inning when Canadian pitcher Sara Groenewegen gave up a runs to Mexico's Brittany Cervantes and Marissa Bravo.

The bases were loaded with no outs when Groenewegen was replaced by Jenna Caira.

Smith said he would usually bring a reliever in earlier but made a coaching error by second-guessing himself.

"At the end of the day, that may have been the outcome of the ball game," he said.

Caira allowed a hit and a walk before veteran Danielle Lawrie was brought in to finish the inning.

Smith said he tries to put pitchers in situations where they can thrive but that didn't happen with Caira on Saturday.

"Jenna's not a strike-out pitcher and when you bring her into a situation where you need a strikeout, it's a bit of a flip of the coin because she has to rely so much on her off-speed pitch," he said. "So that's my fault for allowing it to get to the point where it could be a difference maker."

Lawrie threw 15 pitches to finish the game, registering two strikeouts. She did not allow a single hit.

The Canadians had ample opportunities to add runs, Smith said, including in the sixth inning when they had a lead-off double.

"We didn't have a lot of chances to score but they gave us a few and we didn't capitalize, we didn't execute when we needed to. Whether the moment got a little too big for some of them we don't know, but better now that a year from now," he said.

"Often times when you don't get it done on your end of it, the other team just needs one opportunity. And they capitalized and hats off to Mexico because they did."

Canada will play No. 14-ranked Brazil Sunday in the final game for both sides. A win for Canada would secure the national squad's spot at the Tokyo Olympics.

Despite Saturday's result, Smith isn't planning to make any major changes when his team faces Brazil.

"Today's a bit of a hiccup and I think if I do things a little differently, we win the ball game 1-0. So that's on me," he said.

Canada last faced the Brazilians in the preliminary round of the 2015 Pan American Games in Toronto. The Canadians took a 6-0 victory and eventually captured gold in the tournament.

Brazil will play No. 4-ranked Puerto Rico on Saturday night.

The South Americans surprised many on Friday, edging No. 17-ranked Cuba 6-5.

"They're scrappy. They keep coming at you," he said. "They seem to show up and play hard against every body they play against. So we cannot afford to take anything for granted."