If any team has a chance of stopping Liverpool marching to a first English league title in 30 years, it looks to be Manchester City rather than Leicester.
0
Dec 21, 2019 3:37 PM By: Canadian Press 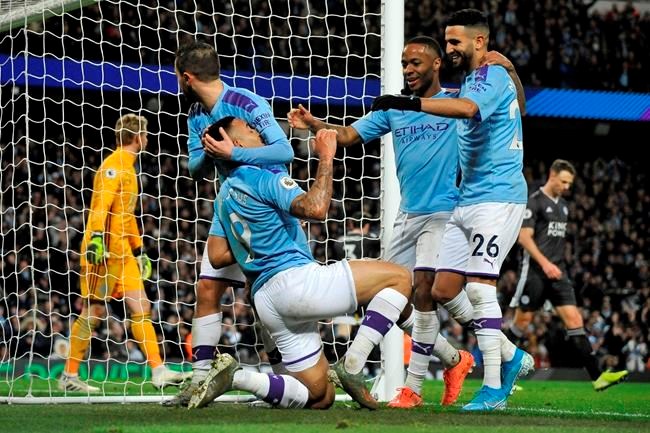 If any team has a chance of stopping Liverpool marching to a first English league title in 30 years, it looks to be Manchester City rather than Leicester.

City gave a timely reminder of its champion qualities by coming from a goal behind to beat Leicester 3-1 on Saturday in a match between the teams who are closest to runaway leader Liverpool in the standings.

Second-place Leicester stayed 10 points behind Liverpool, which wasn’t in Premier League action this weekend because of its involvement in the Club World Cup in Qatar, and is now only one point ahead of City.

On this evidence, it’s City which has the quality to pounce if Liverpool does slip up.

The defending champions conceded against the run of play - Jamie Vardy scoring, almost inevitably, on the counterattack for a league-leading 17th goal of the season - but played some breathtaking, high-energy football to hand Leicester its first league defeat in 10 games dating to Oct. 5.

“Tonight is a good lesson for us of the work we still need to do to get to the level City are at,” said Leicester manager Brendan Rodgers, who described the match as a “humbling” experience.

Riyad Mahrez, who was a constant danger to his former club, equalized with a deflected shot before goals by Ilkay Gundogan - from the penalty spot - and Gabriel Jesus. Kevin De Bruyne was the standout player and set up Jesus' goal with a driving run.

Doubts about City’s stomach for a fight after four losses in the first 16 games of its title have disappeared after scoring three goals in wins over Arsenal and now Leicester over the past week.

“When we lose it is a disaster and impossible, when we win it is possible to catch (Liverpool)," City manager Pep Guardiola said. "If we play like we did tonight we can compete with everyone.”

Liverpool has a game in hand over both of its nearest rivals and still hasn't lost a league game this season.

Sat in the stands watching their new teams play out an uninspiring 0-0 draw, Carlo Ancelotti and Mikel Arteta must have realized the scale of the task awaiting them at Everton and Arsenal, respectively.

Ancelotti was announced as Everton’s latest manager just an hour before kickoff at Goodison Park, while Arteta was officially hired by Arsenal on Friday. Neither coach picked the starting lineups for Saturday’s game that rarely sparked into life, highlighting both teams’ issues in a season where they have struggled.

Ancelotti will take the reins of a side that is in 15th place, just four points above the relegation zone. It’s a situation he isn’t used to, having mostly been in charge of elite European clubs in his illustrious coaching career that includes three Champions League titles.

Arteta’s new team won’t be high on confidence, either, down in 11th place in the league and having won just once in 13 games in all competitions since the end of October.

The Premier League is nearly half a season old, and Sheffield United and Wolverhampton Wanderers are still managing to keep up their unlikely bids for Champions League qualification.

Sheffield United climbed to fifth place with a 1-0 win at Brighton that preserved its unbeaten away record since returning to the top flight this season. It is six draws and three wins from the team’s nine away games, with United not losing away in the league since January — when it was in the League Championship.

Oli McBurnie scored the only goal against Brighton after latching onto a long clearance from goalkeeper Dean Henderson.

Wolves are a point and a place behind after rallying for a 2-1 victory at Norwich, with Raul Jimenez scoring the 81st-minute winner. Romain Saiss began the comeback in the 60th after Todd Cantwell opened the scoring for Norwich, which stayed in next-to-last place.

Both Sheffield United and Wolves can be overtaken by Tottenham and Manchester United, who play separate games Sunday.

Southampton climbed out of the relegation zone at the expense of Aston Villa by beating its relegation rival 3-1, thanks to two goals by Danny Ings. The teams started the match level on points.

Miguel Almiron finally scored for Newcastle in his 27th game for the club in a 1-0 win over Crystal Palace, in a match between two midtable teams.

Burnley scored in the 89th minute to beat Bournemouth 1-0.

Steve Douglas is at www.twitter.com/sdouglas80

Hulking lineman Derek Dennis has experienced racism while playing in Canada
Jun 3, 2020 5:46 PM
Comments
We welcome your feedback and encourage you to share your thoughts. We ask that you be respectful of others and their points of view, refrain from personal attacks and stay on topic. To learn about our commenting policies and how we moderate, please read our Community Guidelines.