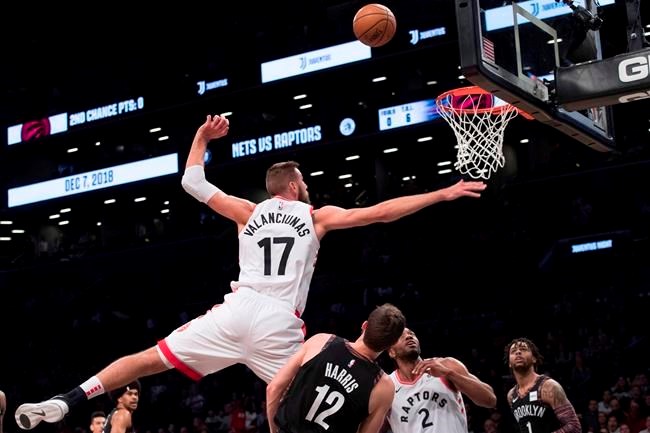 The longtime Raptors forward, who was shipped to Memphis at the NBA trade deadline this past season, hasn't received official notice from Toronto on whether he'll receive an NBA championship ring.

But Lowry has Valanciunas hopeful.

The 27-year-old is in China as the starting centre for sixth-ranked Lithuania, which faces No. 23 Canada on Tuesday in the opening round of the FIBA World Cup.

Valanciunas was drafted by Toronto fifth overall in 2011 and played his entire NBA career with the Raptors before he was shipped, along with Delon Wright and C.J. Miles, to the Grizzlies for Marc Gasol.

Valanciunas attended the Raptors' opening game of the playoffs against Orlando, and the Scotiabank Arena crowd erupted in a spontaneous ovation when the big man, who was one of the Raptors' most popular players, was spotted walking to his courtside seat.

Valanciunas watched a lot of the Raptors' historic playoff run. But it wasn't easy.

"It was kind of hard, because I wanted to be there. But it was fun to watch because my guys were doing good," he said.

The Raptors will receive their rings and watch the NBA championship banner rise to the rafters before their season opener on Oct. 22 versus New Orleans.

If the team decides to give Valanciunas a ring, it would likely be presented on March 30, when the Grizzlies visit Toronto. The two teams will actually meet two days before that in Memphis, the first time they'll go head to head since the trade.

"Two games back to back, woah," Valanciunas said.

Meanwhile, Lithuania is the class of Group H at the World Cup, which also includes No. 11 Australia, and 33rd-ranked Senegal.

The top two teams in each group advance, while the bottom two move to the classification side of the draw. The tournament is the main qualifier for the 2020 Tokyo Olympics, with seven teams earning automatic berths.

Valanciunas and Indiana Pacers forward Domantis Sabonis are Lithuania's two NBA players in the tournament. Canada had 17 NBA players listed on its invitation list. But far less than that showed up for camp, and Canada will take the floor with just two in China — Sacramento guard Cory Joseph and Orlando forward Khem Birch.

When someone pointed out to Valanciunas that Canada has just two, the big man pumped a fist and said: "Yes!"

Canada opens the tournament against Australia on Sunday, while Lithuania takes on Senegal.

Canada's Stewart Friesen ready to get back to racing at NC Education Lottery 200
May 25, 2020 12:13 PM
Comments
We welcome your feedback and encourage you to share your thoughts. We ask that you be respectful of others and their points of view, refrain from personal attacks and stay on topic. To learn about our commenting policies and how we moderate, please read our Community Guidelines.