Toronto Maple Leafs head coach Mike Babcock said in December it looked like the Tampa Bay Lightning were better than every other NHL team. About a month later, not much has changed.
Jan 16, 2019 4:34 PM By: Canadian Press 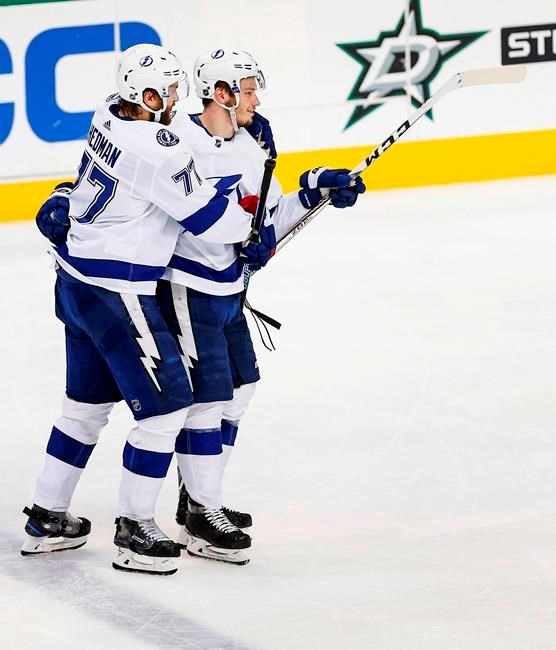 Toronto Maple Leafs head coach Mike Babcock said in December it looked like the Tampa Bay Lightning were better than every other NHL team.

About a month later, not much has changed.

The Lightning are running away from the competition in the overall standings.

Following a 2-0 victory in Dallas over the Stars on Tuesday, Tampa had 74 points — 10 better than the Calgary Flames in the race for the Presidents' Trophy and 16 clear of Toronto for first in the Atlantic Division.

The Lightning (36-9-2) have the league's best home and road records, and have suffered just two regulation losses since the end of November (19-2-1).

But a great finish in the regular season in no way guarantees playoff success.

The Presidents' Trophy, awarded to the team with the best regular-season record, has been handed out 32 times since 1985-86, but just eight of those clubs have won the Stanley Cup, while three others made the final.

Six have been bounced in the first round, and four of the last five have gone out in the second.

The Nashville Predators had the best record last season with 117 points, but lost to the Winnipeg Jets — their Central Division rivals — in seven games in the second round.

Predators head coach Peter Laviolette said his team never focused on the Presidents' Trophy. It just happened as a result of the daily grind.

While leagues like the NBA have moved towards resting stars and veterans with an eye towards the bigger picture, that hasn't happened in hockey.

"We are trying to win (each) game," Laviolette said.

Babcock won the Presidents' Trophy with Detroit in 2005-06, but his Red Wings were dumped out of the playoffs by the Edmonton Oilers in the first round that spring.

Detroit secured the best record again in 2007-08 and won the Cup.

Babcock, whose Leafs visit Tampa on Thursday, said he didn't change his approach to the regular season after the sting of the previous early exit.

"I like winning," he said. "I like coming to the rink and winning every single day. We didn't push to win the trophy. We just came to work."

Leafs winger Patrick Marleau was a member of the San Jose Sharks team that won the Presidents' Trophy in 2008-09 only to be stunned in the first round by the Anaheim Ducks.

The 39-year-old said there was some reflection that summer about how the group went about its business.

"It was disappointing," Marleau said. "You definitely look at things afterwards and figure out what you could have done differently."

"I don't think you could ever to do that," said Subban, who made the Cup final in 2017 with the Predators despite Nashville finishing as the second wild-card team in the Western Conference. "You have to play the right way going into the playoffs."

A well-oiled machine up to this point, the Lightning have yet to experience a downturn in their play.

Unfortunately for a number of past Presidents' Trophy winners, that often doesn't come until the post-season.

"They haven't gone through any slumps yet," Marleau said. "If they don't, then good on them."

The Lightning have, however, endured recent playoff heartbreak.

They were beaten by Chicago for the Cup in 2015 and lost in Game 7 of the conference final two of the last three seasons — including on home ice in May against the Washington Capitals, who went on to win it all and know a thing or two about getting knocked out early after great regular seasons.

Those experiences could serve the Lightning well this spring.

"Their maturity level to play every night and find a way to win seems to be there," Babcock said. "They've had disappointment at playoff time and they look like they're battled-scarred."

Nashville's Viktor Arvidsson and Tomas Hertl of the San Jose Sharks each recorded hat tricks Tuesday. There have been 55 hat tricks in 2018-19, the most through Jan. 15 since the 65 scored in 1992-93.

The Winnipeg Jets picked up their 30th victory Tuesday to match the Calgary Flames. It's the first time Canadian teams are two of the first three franchises to 30 wins in a season since 1988-89 when Calgary and Montreal joined the Pittsburgh Penguins.