TORONTO — An off-season of change continued for the Toronto Blue Jays on Friday as the team dealt catcher Russell Martin to the Los Angeles Dodgers for a pair of minor-league prospects.
0
Jan 11, 2019 10:25 PM By: Canadian Press 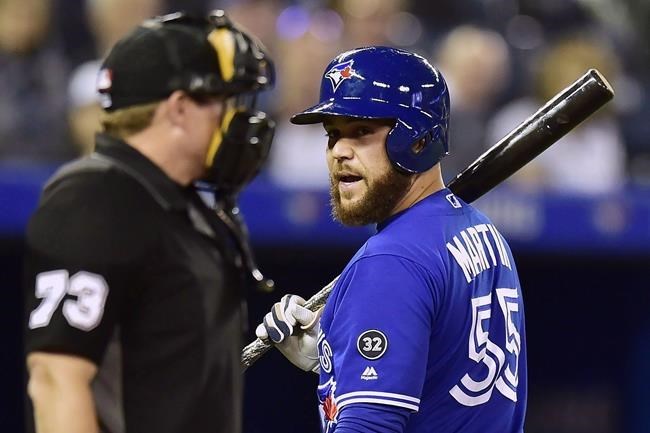 TORONTO — An off-season of change continued for the Toronto Blue Jays on Friday as the team dealt catcher Russell Martin to the Los Angeles Dodgers for a pair of minor-league prospects.

The move came a month after the Blue Jays gave another high-priced veteran — shortstop Troy Tulowitzki — his release.

Like the Tulowitzki decision, Toronto will be eating a lot of Martin's salary. The Canadian is owed US$20 million this season, but the Blue Jays are sending $16.4 million to Dodgers, according to general manager Ross Atkins.

"I want to thank the Blue Jays organization from top to bottom for the opportunity to play in my home country for the last four years," Martin said in a statement."I am now looking forward to being back with the Dodgers where it all began for me.

"I would like to extend a very special thanks to the Toronto fans that followed me every step of the way. I am truly grateful for your continued support."

The trade sends Martin back to the team that drafted him in 2002. The 35-year-old from Chelsea, Que., spent his first five big-league seasons with the Dodgers.

Martin signed with Toronto as a free agent in November 2014. He helped the Blue Jays make back-to-back American League Championship Series appearances in 2015 and 2016.

The four-time all-star has also played for the New York Yankees and Pittsburgh Pirates over his 13-year big-league career. Martin's numbers have tailed off in recent seasons and his playing time has diminished.

Toronto is in full teardown mode after two straight disappointing seasons. The Blue Jays finished fourth in the American League East last year with a 73-89 record.

The Blue Jays have been stockpiling prospects and will field a young team in 2019 with an eye to returning to contention two or three years down the road.