MONTREAL — Playing until the final whistle is something the Montreal Impact have had trouble doing this season. Perhaps they could could learn a lesson from their next opponents, C.D. Olimpia of Honduras. The Impact host C.D.
Mar 9, 2020 6:57 PM By: Canadian Press 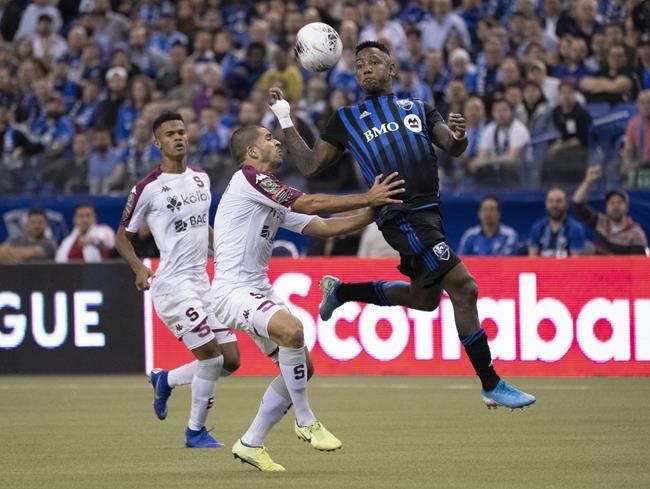 MONTREAL — Playing until the final whistle is something the Montreal Impact have had trouble doing this season. Perhaps they could could learn a lesson from their next opponents, C.D. Olimpia of Honduras.

The Impact host C.D. Olimpia in the opening leg of the CONCACAF Champions League quarterfinal on Tuesday. The return leg is March 17 in Honduras.

The defending Honduran champions narrowly edged the MLS Cup-champion Seattle Sounders on penalties in the round of 16 thanks to late goals in both legs.

"They won't be easy to beat," Impact coach Thierry Henry said Monday. "They defeated the MLS champs. We can't forget that. They're strong, great on set pieces. They play until the very end, like we saw against Seattle.

"This is a team that never gives up."

In the first leg against Seattle, Yustin Arboleda scored twice in the final half hour— in the 63rd and 81st minute — as Olimpia overcame a 2-0 deficit. In the return leg, Carlos Pineda scored a dramatic 86th-minute equalizer to force a penalty shootout.

Olimpia's ability to leave things late could be trouble for Henry's squad, which has already blown 2-0 leads twice this year.

The Impact conceded in the 80th and 90th minute against Deportivo Saprissa in the away leg of their Champions League round-of-16 match, a series they won 2-2 on aggregate on away goals by Romell Quioto and Orji Okwonkwo.

In MLS action on Saturday, FC Dallas scored in the 83rd minute and in stoppage time to tie the game 2-2 and snatch victory from Montreal.

Henry is looking to remain undefeated in his debut season despite squandering those late leads. The Impact are 0-0-2 in the Champions League and 1-0-1 in Major League Soccer.

The first-year Impact coach has managed four positive results despite injuries to Rudy Camacho (knee), Jukka Raitala (fibula) and Lassi Lappalainen (leg). The latest injured player is Bojan (thigh), who missed Saturday's clash in Texas and did not practice Monday.

Newly signed designated player Victor Wanyama, however, received his visa and is eligible to play. Henry did not reveal if the central midfielder, who joined last week from Tottenham, would start or come off the bench.

C.D. Olimpia is the most decorated club in Honduras with 31 championships, including the most recent one last fall. They currently rank second in the Liga Nacional's spring season with a 6-2-4 record, scoring a league-best 25 goals.

"We're expecting them to play a similar style (as Saprissa)," veteran defender Rod Fanni said. "But they have other skills too. They're very physical and good on set pieces."

Luckily for the Impact, Arboleda will not feature in the opening leg due to an accumulation of yellow cards. The striker received a yellow in each leg versus the Sounders.

Picking up the slack offensively in his absence will be forwards Jorge Benguche and Jerry Bengtson.

"(Arboleda) is an important player in our offence, a fundamental part of this team," said Benguche, who leads Olimpia's spring season with six goals. "I believe that we all have to work hard. For me, it's an opportunity to do what I know I can do."

The quarterfinal clash will feel familiar for Impact forward Quioto, the Honduran international who scored 36 goals in 78 appearances for Olimpia from 2014 to 2016.

"MLS is a league that's obviously more physically demanding, more organized than the Liga," said Quioto, who won three spring championships with Los Leones. "And because of that, I think we can get a good result against them.

"Olimpia is a big team, one of the biggest in Honduras, in Central America even. I'm lucky I had a chance to play there."

The winner of the two-legged aggregate series will face New York City FC or Mexico's Tigres in the semifinal next month. Tigres were the runners-up in three of the past four tournaments.

DEJA VU: In 2008, Montreal faced Olimpia twice in the Champions League group stage – a 2-1 win in Honduras and 1-1 draw at Saputo Stadium. Roberto Brown scored all three goals for the Impact.

PAST GLORY: Olimpia won the Champions League in 1972 and 1988 when it was called the Champions' Cup. They have yet to reach the semifinal in the tournament's modern era.

FOUL PLAY: C.D. Olimpia have accumulated the most fouls (36) and yellow cards (seven) in the tournament so far. Yustin Arboleda, who will miss the opening leg, leads all players with eight fouls and two yellows.

This report by The Canadian Press was first published March 9, 2020.

Handball rule draws widespread ire in penalty-dominated EPL
Sep 27, 2020 4:30 PM
Plucky Stars, leading Lightning confident going into Game 6
Sep 27, 2020 2:52 PM
Canada's Eugenie Bouchard through to second round at French Open
Sep 27, 2020 2:49 PM
Comments
We welcome your feedback and encourage you to share your thoughts. We ask that you be respectful of others and their points of view, refrain from personal attacks and stay on topic. To learn about our commenting policies and how we moderate, please read our Community Guidelines.