Honeymoon will have to wait for Traer and Scrubb, who's in China for World Cup

DONGGUAN, China — Catherine Traer and Thomas Scrubb were working out last summer on the basketball court Traer's dad Rick had built in the family's backyard. The two players work out there regularly but this day was particularly memorable.
0
Sep 3, 2019 4:15 PM By: Canadian Press 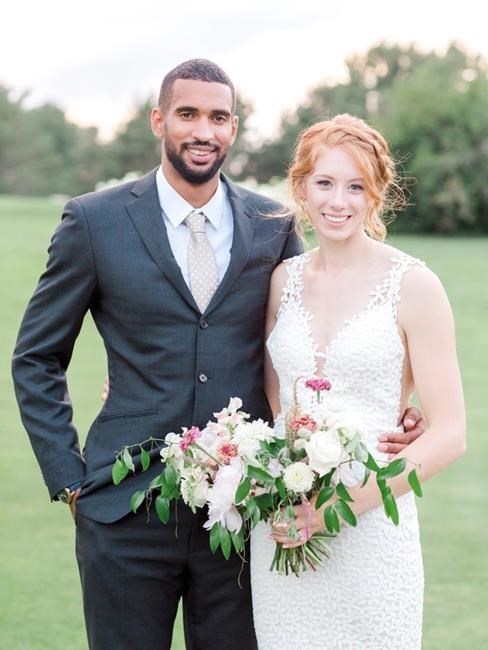 DONGGUAN, China — Catherine Traer and Thomas Scrubb were working out last summer on the basketball court Traer's dad Rick had built in the family's backyard.

The two players work out there regularly but this day was particularly memorable. Chelsea, Que., was experiencing a heat wave at the time. Traer remembered it was nearly 40 C.

"Tommy made me go through this whole workout, and we always end our workouts with 10 free throws. It took me a bit longer that day because I was really struggling because of the heat," Traer said. "The ball just rolled away, I went to pick it up, and I turned around and Tommy was down on one knee."

Scrubb proposed to Traer that day. The two were married on Aug. 4 of this year at Ottawa's Hunt and Golf Club, one night before Scrubb had to fly to Toronto for the Canadian team's basketball camp for the World Cup.

Honeymoon? That will have to wait.

Both Thomas and younger brother Phil Scrubb are playing for Canada at the World Cup, which is the main qualifier for the 2020 Tokyo Olympics. It's believed to be the first time two brothers have suited up internationally for the senior men's squad at the World Cup.

It wasn't looking that way only a few weeks ago, Traer said. Canada Basketball named 17 NBA players on its camp invitation list. But one by one, they withdrew their names. Khem Birch and Cory Joseph are the only NBA players here for Canada, which opens the 32-team tournament on Sunday versus Australia.

"(The roster) has been a blessing and a curse. Obviously for Tommy, a blessing," Traer said. "We never thought he would make it with the roster that they put out originally, we kind of thought he might be a longshot. They had 27 or 28 guys, it was a very stacked team.

"But I guess Tommy and the other guys kind of know what the tendencies are for NBA guys (not) to show up, so they always knew there was hope. Those guys (the Scrubbs) love to show up, so there was no question in their minds whether they were going or not."

The brothers from Vancouver do indeed always show up. The two were mainstays on the Canadian team through the gruelling World Cup qualifying process, logging thousands of air miles between Europe, Canada and South America.

"They really put their lives on hold for this," Traer said. "So it's nice to see that they get the recognition, they get to play, and the chemistry is there because they've played together for years now."

The Scrubbs — Phil is a six-foot-four guard while Tommy is a 6-7 forward — dominated U Sports basketball, leading the Carleton Ravens to five straight national titles in their five seasons. Traer, meanwhile, played at the University of Ottawa before doing almost the unthinkable: transferring to crosstown rival Carleton for her final two seasons, and leading the Ravens to a Canadian women's title.

"It's a huge rivalry (between the two schools), and it felt like our whole wedding was back and forth, people in their speeches talking about it," Traer said with a laugh.

Since the two met in Ottawa a few years back, a good chunk of their relationship has been long distance. Scrubb has played professionally in Finland, Germany, plus two cities in Italy. He'll play with SIG Strasbourg in France next season, and Traer will move there with him.

"It's obviously been really hard, it sucks to say but we kind of got used to the long distance after awhile, you find your ways," Traer said. "But basketball is just so important to both of us that we completely understand each other's commitments."

Scrubb has had his sights set on playing in the World Cup since Canada missed qualifying for the 2016 Rio Olympics. He was on the Canadian team that lost to France in a heartbreaking last-chance qualifier in the Philippines.

"I guess it was a year-and-a-half later that World Cup qualifying started so yeah, just travelling in the middle of the (European pro) season to all those places just makes you want to just finish it off really good," Scrubb said after Saturday's practice.

"A lot of travel and a lot of work so we wanted to make it all worth it in the end."

Traer said it's helped that the two share similar dreams and goals.

"And when you're doing what you love it does make it easier, and it makes it easier that we completely understand what each other is going through," she said. "It's always just kind of worked out because we knew we wanted to be with each other and we also wanted to play basketball at the same time."

Traer is also trying to get to the 2020 Tokyo Olympics, teaming up with Edmonton twins Katherine and Michelle Plouffe, Paige Crozon, Mariah Nunes, and Brey Johnson in 3x3 basketball, which will make its Olympic debut next summer.