Commissioner Roger Goodell has reduced his salary to $0 and other NFL employees will be taking pay cuts or furloughs due to the coronavirus pandemic.
Apr 29, 2020 3:56 PM By: Canadian Press 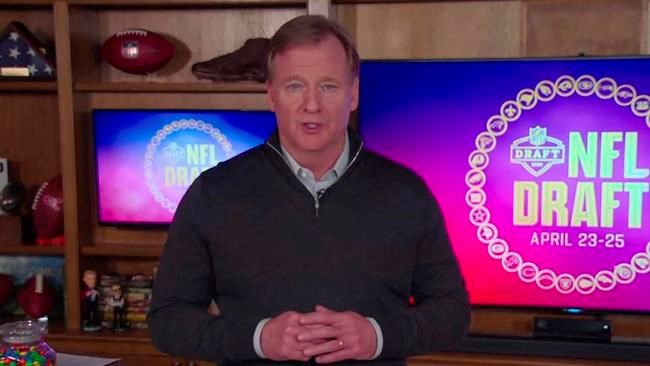 Commissioner Roger Goodell has reduced his salary to $0 and other NFL employees will be taking pay cuts or furloughs due to the coronavirus pandemic.

Goodell, who makes upward of $30 million a year from salaries and bonuses, voluntarily had his salary reduced this month, a person familiar with the move tells The Associated Press on Wednesday. The person spoke on condition of anonymity because the NFL has not announced the move publicly.

The league also is implementing tiered reductions in base salary, beginning with the pay period ending May 22. The reduction will be 5% for workers up to the manager's level, 7% for directors, 10% for , 12% for senior , and 15% for executive .

In a memo sent to league office staffers, Goodell also said no employee earning a base salary of less than $100,000 will be affected by these reductions, and no employee’s salary will be reduced below $100,000 by the reductions.

“We hope that business conditions will improve and permit salaries to be returned to their current levels, although we do not know when that will be possible,” Goodell said.

While the NFL has gone about business as usual with free agency and the draft — and currently is planning to play a full season beginning in September — it clearly is feeling the same economic pinch as other sports. Even as it extended its streaming deal with Amazon Prime for Thursday night games for another three years on Wednesday, the league was making in-house financial adjustments.

That means furloughs and adjustments to pension plans.

The furlough program “for individuals in our workforce who are unable to substantially perform their duties from home and/or whose current workload has been significantly reduced,” Goodell wrote, will become effective May 8.

Those being furloughed will be alerted in the next few days, and they will keep medical, dental and vision benefits, with the league paying the full cost of maintaining those benefits.

“It is important to remember that a furlough is not a termination,” Goodell told league staffers. “We do not know how long a furlough will last, but we are hopeful that we will be able to return furloughed employees back to work within a few months.”

Pension plan and other contributions will be reduced from 15% to 10% of eligible compensation and is a permanent change which takes effect on July 1.

“The NFL is not immune to the economic consequences of the COVID-19 pandemic and it is our obligation to take responsible steps to protect the business and manage through this crisis as effectively as possible,” Goodell wrote.

"These decisions were difficult and we know these measures will cause hardship for those impacted. I encourage everyone to continue to identify ways of operating more efficiently and reducing costs. If we do that, I believe that furloughs and compensation reductions can be limited, or in time even reversed.

“I assure you that we will continue to monitor economic conditions, communicate with you promptly and openly — whether the news is good or bad — and have your interests in mind as decisions are made going forward.”

The NFL plans to release its regular-season schedule around the second week in May, and currently is allowing virtual workouts by teams. It has an owners meeting scheduled for the Los Angeles area in late May that likely will become a video conference instead.

Training camps wouldn't open before the end of July. The first major event of the summer would be the Pro Football Hall of Fame game on Aug. 6 and inductions on Aug. 8. All of those, of course, must be considered tentative at this time.

Sports' buy-in needed to prevent super-spreader potential: experts
Oct 28, 2020 6:13 PM
Comments
We welcome your feedback and encourage you to share your thoughts. We ask that you be respectful of others and their points of view, refrain from personal attacks and stay on topic. To learn about our commenting policies and how we moderate, please read our Community Guidelines.