The challenge of restarting England's rugby league season grew even more complicated Tuesday with news that the French government has banned all major sporting events until September.
Apr 28, 2020 2:40 PM By: Canadian Press 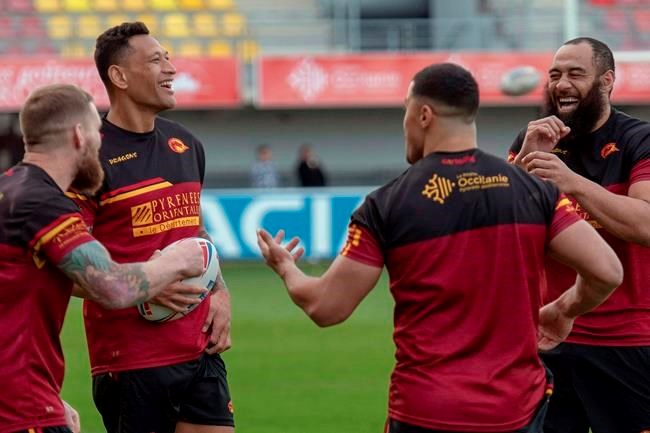 The challenge of restarting England's rugby league season grew even more complicated Tuesday with news that the French government has banned all major sporting events until September.

Super League's return to play was always going to be complex with three countries involved in the 12-team circuit. France has now added to the degree of difficulty.

While France is set to emerge out of pandemic lockdown on May 11, major sporting events are being banned until September.

"We were on a call with the league when that news came out," said Wolfpack CEO and president Bob Hunter.

Ontario, meanwhile, is planning to ease some restrictions but has indicated that sporting events and concerts will have to wait.

"Honestly we've had a whole bunch of hurdles so far and we've been able to figure them out generally," said Hunter. "And I think it's just a matter again of figuring out a solution that would work for all the clubs."

Catalan coach Steve McNamara told the Guardian that his Perpignan-based team could relocate to England to fulfil its Super League obligations if the circuit starts up sooner than later.

"We've a team that’s ready to play and we need to find a way of doing that," he told the newspaper.

The Wolfpack were set to finish their 28-game regular season on Sept. 11, with playoffs to follow. Club officials have examined a variety of scenarios, with one involving playing all of their home games in England if travel or other restrictions continued.

Canadian weather could eventually factor into that if the league cannot start until the fall.

It would not mark the first time that top-tier English rugby league has been played in winter. Super League began in 1996, replacing the First Division and switching from a winter to a summer season.

The transatlantic Wolfpack have not played since March 11, when they blanked Huddersfield Giants 18-0 in the fifth round of the Challenge Cup.

On March 16, Super League and the Rugby Football League suspended play until April 3 due to the global pandemic. The suspension was then made indefinite.

Teams remain idle, and player and staff pay has been reduced. The Wolfpack (0-6-0) are currently on hiatus in England.

The Toronto team was slated to play its home opener against Hull FC on April 18 at Lamport Stadium. It has postponed that game and the next two at Lamport (against Wigan and St. Helens). The schedule then calls for three away games before a two-game homestand starting June 13 against Castleford Tigers.