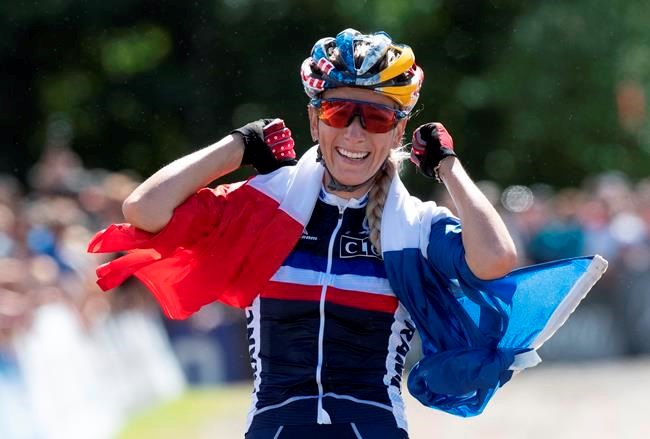 MONT SAINTE-ANNE, Que. — Catherine Prendel was going strong through the first half of Sunday's race at the UCI mountain bike world championship.

But a spill on a mound of boulders in the third lap proved a setback, and left her needing stitches on her elbow en route to a 14th-place finish.

France's Pauline Ferrand Prevot won gold, pulling ahead of the pack in the middle of the gruelling, six-lap, four-kilometre course to finish 43 seconds ahead of Jolanda Ness, the Swiss national champion, and 1:17 ahead of Australian national champion Rebecca McConnell, who led the race for most of the first half.

Prendel, from Kamloops, B.C., was ranked 10th in the world going into the race and is one of Canada's best hopes at next year's Tokyo Olympics. The others, Emily Batty and Haley Smith finished ninth and 12th respectively.

"Right now I am still the second ranked Canadian," said Pendrel, who won silver in Rio in 2016. "We just all have to work hard this winter and whoever has the best World Cup next year that should be the person who should go. We're in a good spot, it's pretty exciting and it's going to be a good motivation for all of us. I've been to three Olympics so it would be amazing if I got to go to four."

Batty, who finished fourth in Rio, and is the current Canadian women's mountain bike champ, said finishing as the top Canadian lets her "leave the season on a bit of a good note and charging into the winter for next season."

The 31-year-old Brooklin, Ont., native said she drew energy from the thousands gathered to watch the race, and at a few points was nearly deafened by the cheering.

"So many family members and friends and fans, it was just so spectacular performing in front of these people," she said.

Smith, 25, of Uxbridge, Ont., boasted a seventh place world ranking before Saturday's race. She said she was "so nervous" going into the race.

"I've never started in the front row at a World Cup, let alone a world champs," she said.

Smith praised the enthusiastic crowd and lauded the course, saying it was "tacky and fast" with no mud lingering after steady rain Friday.

Canadian Sandra Walter, 39, finished 18th in the field of 61 riders for the best World Cup result of her career.

"My first world championship ever was here in 1998 when I was a junior," she said. "I had really no idea what the sport was about until I came here and witnessed the best in the world. That fuelled my fire and now 20 odd years later I'm back."

When asked if she'll retire, she joked "how can I retire when I just keep getting better?"

Ferrand Prevot bounced back from surgery on both her legs earlier in the season. Her comeback was signalled by a top finish in July in Italy. Ferrand Prevot has won world championships in three bike disciplines — road, cyclo-cross and mountain bike. She won gold the last time she raced at a world championship in Mont Sainte Anne, in 2010, as a junior.

Rio Olympian Leandre Bouchard was the top Canadian, with the Alma, Que., native finishing 5.08 seconds back.

This is the third time Mont Sainte Anne has hosted the UIC World Championships. Some 700 riders from about 50 countries have been competing in cross-country, downhill, and for the first time, electric bike events.