France to try former IAAF boss Diack and his son

PARIS — Lamine Diack, once one of the most influential men in Olympic sport, has been ordered to stand trial in France for his alleged role in a system of corruption, extortion and doping coverups during his reign at the top of athletics.
0
Jun 24, 2019 1:20 PM By: Canadian Press 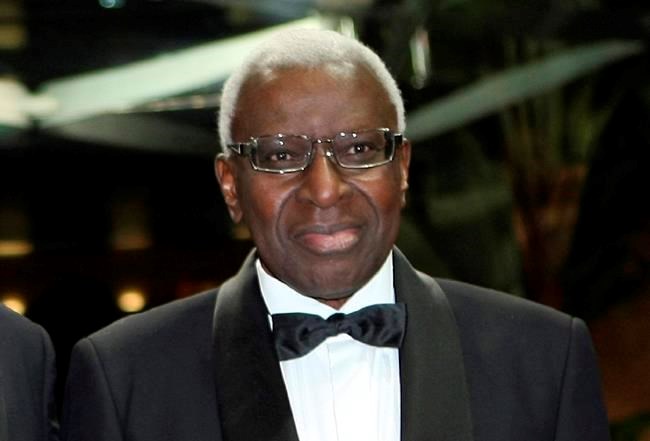 PARIS — Lamine Diack, once one of the most influential men in Olympic sport, has been ordered to stand trial in France for his alleged role in a system of corruption, extortion and doping during his reign at the top of athletics.

Diack was head of the IAAF for nearly 16 years. Arrested in France in 2015, he will be tried on charges of corruption, influence-trafficking, and money laundering, a French judicial official said on Monday, speaking on condition of anonymity because they weren't authorized to publicly discuss the planned trial.

The money-laundering charge, alone, carries a potential jail term of up to 10 years. The 86-year-old Diack has been under orders to stay in France since his arrest. The trial date has not been fixed but is not expected before next year.

Also ordered to stand trial was one of Diack's sons, Papa Massata Diack. He has emerged as a central figure in French judicial probes of suspected corruption involving the 2016 and 2020 Olympic Games and other sports events. The judicial official said the younger Diack will stand trial for complicity in corruption and money laundering. Believed to be living in Senegal, he could be tried in absentia. At France's request, the international police agency Interpol has issued a wanted notice for him.

As IAAF president, Lamine Diack presided over an era when Usain Bolt, in particular, made track and field wildly popular. But Diack's legacy, and the IAAF's credibility, took a beating after he stepped down in 2015, replaced by Sebastian Coe, with his arrest and subsequent revelations of athletes being blackmailed and of doping .

At least a half-dozen athletes are thought to have been told that their suspected doping could be hushed up, allowing them to continue competing, if they paid up. The head of France's financial prosecution service told The Associated Press in 2015 that Diack pocketed more than 1 million euros ($1.1 million) from the alleged cash-for-silence scheme. The French prosecution service has become extremely active in going after suspected corruption in sports, using its broad powers to investigate marquee events, including the award of the 2018 soccer World Cup to Russia and the 2022 World Cup to Qatar.

Investigators for the World Anti-Doping Agency concluded in 2016 that Diack and his sons, hired during his reign as IAAF consultants, formed a "powerful rogue group" within the governing body. Their report claimed Diack was "responsible for organizing and enabling the conspiracy and corruption that took place in the IAAF. He sanctioned and appears to have had personal knowledge of the fraud and the extortion of athletes."

Evidence from WADA triggered the launch of the French probe of Diack and his associates. French investigating magistrates overseeing the investigation have also ordered trials for Valentin Balakhnichev, a former IAAF treasurer, and Alexei Melnikov, a coach who led Russia's long-distance running program.

They, too, could be tried in absentia because Russia generally refuses to extradite its citizens. Balakhnichev will be tried for corruption and money laundering; Melnikov for corruption. They have been banned from track and field for life . An IAAF ethics committee imposed life bans in January 2016 for an alleged conspiracy to extort money from Russian runner Liliya Shobukhova, a former winner of the Boston, Chicago and London Marathons who later turned whistleblower.

Also to be tried in France for corruption are Habib Cisse, a former legal adviser to Diack, and Gabriel Dolle, who was the IAAF anti-doping director.