TORONTO — Brett Connolly says he owes the Stanley Cup ring on his finger to Devante Smith-Pelly. Some 15 months after that magical playoff run, Connolly simply hopes his former teammate gets another chance.
0
Sep 3, 2019 3:43 PM By: Canadian Press 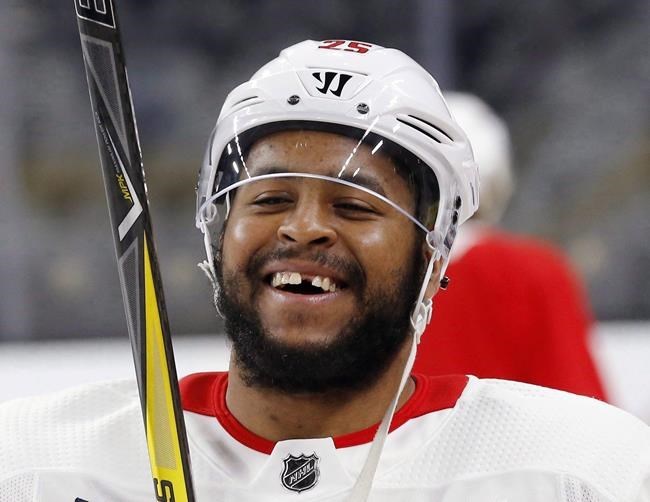 TORONTO — Brett Connolly says he owes the Stanley Cup ring on his finger to Devante Smith-Pelly.

Some 15 months after that magical playoff run, Connolly simply hopes his former teammate gets another chance.

Smith-Pelly scored in Games 3, 4 and 5 of the 2018 final to help the Washington Capitals secure their first championship, only to follow that up with a terrible season where he was eventually placed on waivers and banished to the minors.

With training camps right around the corner, the 27-year-old free agent remains unsigned and looking for work, but Connolly is convinced his friend will get another NHL shot.

"It was tough," Connolly said of Smith-Pelly's road since hoisting the Cup on the Vegas strip. "It's a tough business. Someone's going to give him something.

"Whoever does end up signing him, they're going to get the best Devante Smith-Pelly that Washington got a couple years back."

Smith-Pelly, who declined a couple of media requests at last week's BioSteel camp in Toronto, registered seven goals in 24 playoff games with the Capitals two seasons ago. Playing a fourth-line role, he scored twice in the first round and twice in the Eastern Conference final, including an insurance goal in Game 6 against the Tampa Bay Lightning with the Capitals' backs against the wall.

The bruising winger then found the back of the net in Washington's 3-1 victory in Game 3 of title series versus the Vegas Golden Knights and bagged another Game 4's 6-2 blowout win.

Then with his team trailing 3-2 midway through the third period of Game 5, Smith-Pelly pressured Knights defenceman Luca Sbisa on the forecheck before skillfully coralling Brooks Orpik's point shot and sliding home the tying goal.

"He's probably the reason why I have a ring ... there's no question, with that goal he scored in Game 5, and all the goals he scored all the way through," said Connolly, who signed with the Florida Panthers this summer after three seasons in Washington. "That's something that'll never be taken away from him."

What the six-foot, 223-pound Toronto native wound up losing, however, was NHL employment.

Smith-Pelly re-signed with the Capitals for one year at US$1 million last June — Washington inked a $650,000 deal for the same term in July 2017 after he was bought out by the New Jersey Devils — but struggled with just four goals and eight points in 54 games before getting placed on waivers.

Unclaimed by the NHL's other 30 teams, he had six goals and 14 points in 20 AHL games, and was recalled by the Capitals in the playoffs, but didn't register a point in three appearances as Washington bowed out in the first round.

A second-round pick by Anaheim in 2010, Smith-Pelly has 44 goals and 101 points in 395 regular-season games with the Capitals, Devils, Ducks and Montreal Canadiens.

Smith-Pelly, who's also posted 16 points (13 goals, three assists) in 51 playoff contests, spent the summer training with BioSteel founder Matt Nichol alongside a number of NHL players as usual — only this time without a contract.

"He had an extremely short off-season (after winning the Cup)," Nichol said. "We've had 10 guys in 10 years win the Cup at our gym, which is cool, but it's a struggle. Even if you have the best intentions, you come back home and you have all sorts of family and friends demanding your time.

"Last summer was a learning process. This summer he was very dialled in."

"He's the same guy," said Wilson. "He's in a situation where you've got to put your head down and hope for an opportunity.

"We had an amazing time together in Washington. We won together, so we'll always have that bond. I hope the best for him."

Connolly said although Smith-Pelly had a down year, there are likely other factors at play when it comes to why he and a few other established NHLers remain on the open market — mainly that a number of potential suitors don't know how much money will be left over once the long list talented restricted free agents finally sign.

But whatever general manager does take the plunge, Connolly doubts Smith-Pelly will disappoint.

"He knows this is a big training camp and a big year," he said. "He's a confident person and believes in himself. He's just being patient.