First-place Bombers have underdog status ahead of Labour Day Classic

REGINA — The first-place Winnipeg Blue Bombers find themselves as underdogs heading into Sunday's game against the Saskatchewan Roughriders.
0
Aug 31, 2019 5:42 PM By: Canadian Press 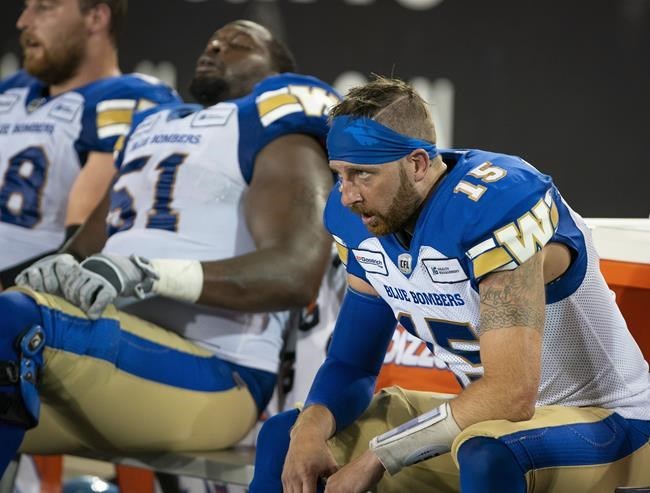 REGINA — The first-place Winnipeg Blue Bombers find themselves as underdogs heading into Sunday's game against the Saskatchewan Roughriders.

The Bombers, despite their 8-2 record, are without quarterback Matt Nichols and running back Andrew Harris, while the Riders are on a hot streak, having won their last five games to improve to 6-3.

Nichols suffered a shoulder injury on Aug. 15 against the B.C. Lions and was placed on the six-game injury list. At the time of the injury, Nichols was leading the CFL with 15 touchdown passes and a quarterback rating of 107.7.

Harris, the CFL leader with 908 rushing yards, was suspended on Aug. 26 after testing positive for a banned substance.

Oddsmakers have made the Riders 6.5-point favourites but Bombers quarterback Chris Streveler isn't paying attention to that.

"I don't care about any of that stuff," said Streveler, who guided the Bombers to s 34-28 victory over the Edmonton Eskimos on Aug. 23 in his first start of the season.

The Riders may be on a hot streak that has them in the battle for first place in the West Division but receiver Naaman Roosevelt is adamant they won't take the Bombers lightly despite the absence of Nichols and Harris.

"No, we don't see them as an underdog. We see them as a team that's 8-2 and in first place," said Roosevelt. "They still have a lot of great players even though they're missing a couple. They're still a great team. They play together, that's one thing they do, they use that 'next man up' attitude. They've got a great team, we know that, so we're going to bring our 'A' game."

Second-year running back Johnny Augustine will make his first start for the Bombers as he fills in for Harris. In eight games this season, Augustine has rushed for 60 yards on nine carries with career totals of 111 yards rushing on 16 carries in 17 games.

Streveler believes Augustine is capable of contributing to the Bombers' attack.

Sunday's contest will be the 56th Labour Day meeting between the teams. In recent years, the Riders have held the upper hand with a 15-5 record since 2000, including a 13-1 record in the last 14 games.

"It's all about this one. It's a nice stat but it doesn't help us with this game," said Riders linebacker Cameron Judge. "We just have to come in and try to go 1-0 tomorrow."

MICAH'S READY: Defensive tackle Micah Johnson is returning to the Roughriders lineup after missing two games with a high ankle sprain. Johnson, signed to a free agent contract that made him one of the highest paid defensive players in the CFL, has 11 defensive tackles in seven games this season. He has yet to record a sack.

FAJARDO'S ON A ROLL: Riders quarterback Cody Fajardo has a current streak of 129 pass attempts without an interception. Fajardo, who has seven interception free games this season, will attempt to become the first Saskatchewan quarterback to win six consecutive starts since Darian Durant put together a seven-game winning streak in 2014.

THE RETURN OF BIG WILLIE: Bombers defensive end Willie Jefferson is returning to Regina after playing the previous three seasons with the Riders. In 41 games with the Riders, Jefferson chalked up 97 defensive tackles, 21 sacks, two interceptions and three touchdowns. Last week he was named the CFL's top performer for August after recording seven defensive tackles, six sacks, one interception and two forced fumbles in four games.