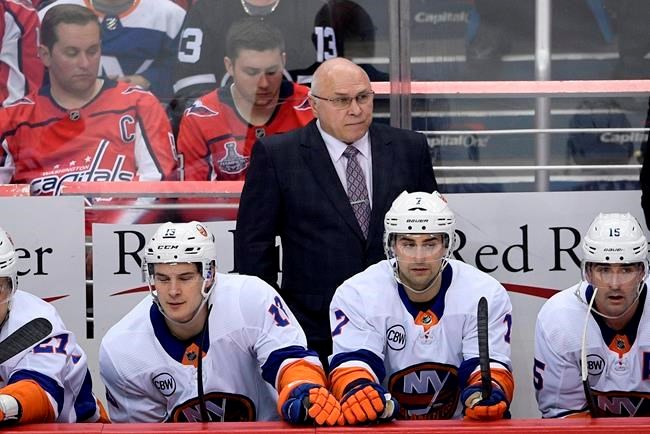 TORONTO — Tampa Bay coach Jon Cooper took exception to the Columbus Blue Jackets being referred to as “a blue-collar” team.

“Is that a positive or a negative?” Cooper said Monday, a day before his Eastern Conference second-seeded Lightning open the first round of the NHL playoffs against the seventh-seeded Blue Jackets.

Cooper and the Lightning know just how good the Blue Jackets are in a rematch of last season’s first-round series in which Columbus swept the Presidents' Trophy winners in four games.

Familiarity is breeding respect among the East opponents entering the first round.

Fourth-seeded Boston and Carolina open on Tuesday, a year after the Bruins swept the Hurricanes in the conference finals.

The other two series, which begin Wednesday, feature coaches facing their former teams.

Two years removed from coaching the Capitals to win the Stanley Cup, Barry Trotz is now behind the New York Islanders bench in preparing to face third-seeded Washington.

“That group has a lot of pedigree, they’ve got a lot of star power,” Trotz said of the Alex Ovechkin-led Capitals. “I think it’ll be a hell of a series.”

The top-seeded Philadelphia Flyers have two former Montreal coaches — Alain Vigneault and assistant Michel Therrien — on their staff in preparing to face the upstart Canadiens. Montreal was the last team in the East to qualify for the expanded playoffs, and then needed four games to win its best-of-five series over Sidney Crosby and the Pittsburgh Penguins.

“Yeah, 2020 has been really weird for many people, for the whole hockey world, and that’s why we’re here, too,” Canadiens forward Phillip Danault said, noting how a year ago Montreal fell one point short from qualifying for the . “Yes, we had a bit of luck to be in the playoffs. But obviously, I think anything can happen.”

The Flyers and Canadiens have split their previous six playoff meetings, with Philadelphia most recently beating Montreal in five games in the 2010 conference finals.

Bad enough the Presidents' Trophy-winning Bruins looked flat at times in losing all three round-robin games to finish as the East’s fourth seed. Injuries continue to be an issue.

“Of course I would have liked another day, just to rest,” Cassidy said, noting how Boston is coming off a 2-1 loss to Washington on Sunday. “Maybe, for us, in this case it’s good to get back at it right away, because we haven’t been involved in the sort of sudden-death playoff atmosphere.”

The Bruins have won four of five series against Carolina/Hartford.

Tampa Bay faces the possibility of opening its series against Columbus minus its two top players.

Captain Steven Stamkos has been out since sustaining a lower body injury before the start of training camp last month. And Victor Hedman’s status is uncertain after the Norris Trophy finalist appeared to twist his right ankle in a 4-1 loss to Philadelphia on Saturday.

“It’s a tough job to fill and we have to do it collectively,” Kevin Shattenkirk said. “It’s not just going to be one person coming in and trying to emulate Victor Hedman.”

Columbus coach John Tortorella ruled out Blue Jackets goalie Elvis Merzlikins from Game 1. That means the Blue Jackets will start Joonas Korpisalo, who is coming off a 33-save outing in Columbus’ 3-0 Game 5 win over Toronto on Sunday night. Korpisalo also shut out Toronto in Game 1, but was yanked for Merzlikins after allowing three goals on 15 shots in Game 3.

And whatever advantage the Hurricanes might have had in playing meaningful games as compared to the Bruins playing in a round-robin series might also have been negated.

“If we had started a day or two after that series, then I would’ve said, yes, for sure, there would’ve been maybe a little advantage there," he said. "Now, I think that probably went away with us sitting for a week.”

On the bright side, Dougie Hamilton could be in position to make his playoff debut in Game 1 for Carolina.

Trotz was behind the Capitals bench in 2015, when Washington eliminated the New York Islanders in seven games of a first-round series.

“It was a highly competitive emotional series and I expect a lot of the same,” Trotz said.

Capitals coach Todd Reirden played down the notion of facing his former boss.

“It’s not Barry Trotz versus Todd Reirden or any of those type of things,” he said.

The Islanders hold a 5-2 playoff series edge over Washington.

Handball rule draws widespread ire in penalty-dominated EPL
Sep 27, 2020 4:30 PM
Plucky Stars, leading Lightning confident going into Game 6
Sep 27, 2020 2:52 PM
Canada's Eugenie Bouchard through to second round at French Open
Sep 27, 2020 2:49 PM
Comments
We welcome your feedback and encourage you to share your thoughts. We ask that you be respectful of others and their points of view, refrain from personal attacks and stay on topic. To learn about our commenting policies and how we moderate, please read our Community Guidelines.