Martin Peters, whose place in English soccer lore was secured by scoring one of the national team's goals in its victory over West Germany in the 1966 World Cup final, died Saturday after a long battle with Alzheimer's disease. He was 76.
0
Dec 21, 2019 3:41 PM By: Canadian Press 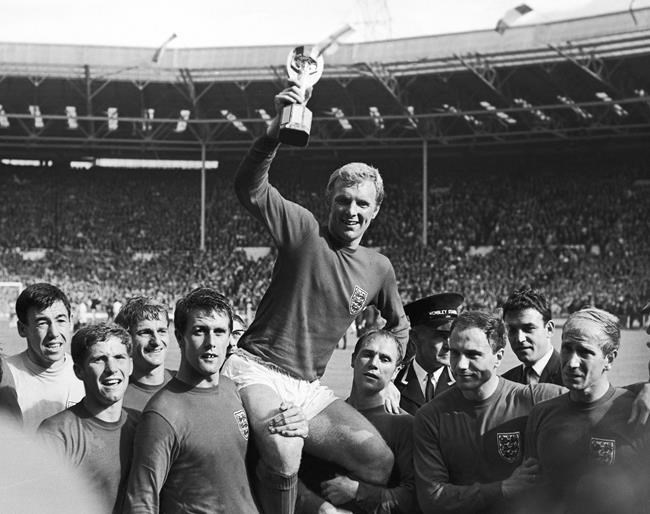 Martin Peters, whose place in English soccer lore was secured by scoring one of the national team's goals in its victory over West Germany in the 1966 World Cup final, died Saturday after a long battle with Alzheimer's disease. He was 76.

Peters' family announced his death via a statement through English soccer club West Ham, saying he passed away peacefully in his sleep.

“A beloved husband, dad and grandad, and a kind, gentle and private man, we are devastated by his loss but so very proud of all that he achieved and comforted by the many happy memories we shared,” the family said in a statement.

Peters, a wide midfielder with good movement, an eye for goal and and ability to cross the ball well with either foot, netted the second goal in the 1966 final that still remains the most cherished day in the history of English soccer. Geoff Hurst, who also played alongside Peters at West Ham, scored England's other three goals in a 4-2 win after extra time. It is the only major tournament won by the England men's soccer team.

“Today is a very sad day for football & for me personally,” Hurst wrote on Twitter. “Martin Peters was one of the all time greats & a close friend and colleague of mine for in excess of 50 years.”

Peters scored 20 goals for England in 67 international appearances - with one standing out way above the rest. A shot at goal was blocked by a sprawling West Germany defender, only for the ball to loop up to Peters, who volleyed home right-footed from just outside the six-yard box. He skipped away in delight, with both arms held high.

That was the undoubted highlight of his playing career, with Peters spending 11 years at West Ham at club level after signing as an apprentice in 1959. He helped the east London club win the European Cup Winners' Cup in 1965.

After 364 games and 100 goals, Peters left Upton Park for Tottenham in 1970 and became Britain's first 200,000-pound footballer. With Spurs, he lifted the English League Cup at Wembley Stadium in 1971 and again, as captain, in 1973 - a season after playing his part in the team's UEFA Cup final victory over Wolves.

He had a five-year spell at Tottenham and again at Norwich before retiring in 1981. Peters regularly attended matches at West Ham as a club ambassador.

“Martin represented everything that we hold dear to our heart at West Ham United - a local boy who progressed through the academy ranks, played football with class, skill and determination, and provided our supporters with a host of magical memories over the years,” West Ham co-owners David Sullivan and David Gold said.

“The fact that he went on to achieve the pinnacle of the beautiful game by winning the World Cup, along with his West Ham teammates Bobby Moore and Geoff Hurst, is of course a constant source of pride for our football club and something that will never, ever be forgotten. In many ways, though, Martin's greatest legacy is not the World Cup medal itself, but the example that he provides to every young player who walks through the door of our academy.”

In 2016, Peters was diagnosed with Alzheimer's disease, one of several of the 1966 World Cup team to be battling dementia.

Steve Douglas is at www.twitter.com/sdouglas80