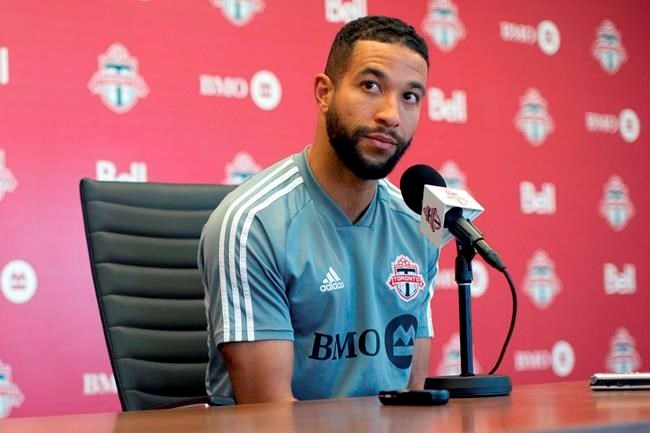 The two have 13 seasons of TFC service between them, combining to play 365 games in Toronto colours in all competitions.

The signings do not come as a surprise, given both have been at Toronto's training camp, which opened last week. But they needed new deals after their contracts expired at the end of last season.

With 229 appearances in Toronto colours, Morrow is second only to midfielder Jonathan Osorio's 263 in the club record book. Captain Michael Bradley is third (214) on the list.

"I couldn't be happier to be back here in Toronto," Morrow said. "It's been an incredible seven years. This will be No. 8 and I'm looking to make it just as good as all the rest — getting back to winning trophies in Toronto, the best place to do it."

When healthy, the 33-year-old from Cleveland is a fixture at left fullback — a reliable, hard-working performer with skills at both ends of the field. Away from the pitch, he is widely respected as executive director of Black Players for Change.

How good is it to have Morrow back? Just ask Zavaleta.

"It's wonderful," said Zavaleta. "There was a real balance over the last six years with creating and bringing in new blood, but also maintaining the spine of the team. And I consider myself, Michael (Bradley), Jozy (Altidore), Justin and Oso (Osorio) being a part of that.

"These are guys that have competed and have proven what success is in MLS and even beyond with (CONCACAF) Champions League and others. And so keeping another guy like that around is so beneficial for the younger players.

"I believe and I know Justin believes he's still got some more left to give on the field. I know last year was tough for him too with him battling some injuries towards the end of the season. He's more motivated than ever."

Morrow saw action in 15 of Toronto's 23 regular-season games in 2020 with 11 starts. But he missed most of the stretch drive due to injury.

"Justin has been a fixture with TFC and it’s great to have him signed," Toronto GM Ali Curtis said in a statement. "His versatility on the field, veteran presence in the locker-room and overall leadership on and off the field have been critical for the club for a long time and we’re thrilled that will continue."

The 28-year-old Zavaleta, who is starting his seventh season with Toronto, has made 136 appearances in all competitions for TFC. He has served as backup for first-choice centre backs Omar Gonzalez and Chris Mavinga in recent times.

Zavaleta, originally acquired in a trade with the Seattle Sounders in January 2015, is one of 12 players to have made 100 appearances or more for TFC and currently ranks eighth all-time in club history in appearances.

Zavaleta adds depth to a defence that lost veteran backup Laurent Ciman since last season. The Indiana native's deal is for one year with an option for the 2022 season.

“Eriq is another veteran who’s given a lot to the club,” said Curtis. “This is a big year for Eriq. He comes to the training ground every day ready to work and is a great role model as an all-around professional for our young players.”

"We need guys around who understand what it means to be on a winning championship team," he said. "Eriq's a guy that's been through it all and he has a cerebral mentality that he brings to the game. He'll be an important veteran presence in our locker-room and on the field."

Zavaleta saw action in just five regular-season games in 2020, including three starts. He said he was proud of how he handled the limited opportunities, working behind the scenes to be ready when needed,

"Yeah, of course I want to play more games, I want to help the team win," he said. "I've been a part of tons of success here and had many more minutes in other seasons.

"But if I reflect on last year, it was actually a good year for me. I think I pushed Omar and Chris as much as I possibly could to continue to keep their form up, because I was right behind them. And I was going to help the team win if slotted in. That's my goal again this year."

Morrow joined Toronto in 2014 after four seasons with the San Jose Earthquakes. He was an MLS all-star in 2012 with the Quakes and was named to the MLS Best XI in 2017 when Toronto won the MLS Cup, MLS Supporters’ Shield and Canadian Championship.

Morrow, who has 17 career goals and 19 assists for Toronto, made US$330,000 in 2019, the last year the MLS Players Association released salary figures for. That ranked 11th among TFC players.

Zavaleta, a former U.S. youth international who began his MLS career with Seattle and Chivas USA, made $296,960 in 2019.

TFC finished out the 2020 season playing out of East Hartford, Conn., due to pandemic-related travel restrictions. The club is looking at playing home games in Florida to start the 2021 season, which kicks off April 17.

This report by The Canadian Press was first published Feb. 23, 2021