TORONTO — There are some games where it feels like the Toronto Blue Jays are taking years off of Charlie Montoyo's life.
Aug 31, 2019 7:34 PM By: Canadian Press 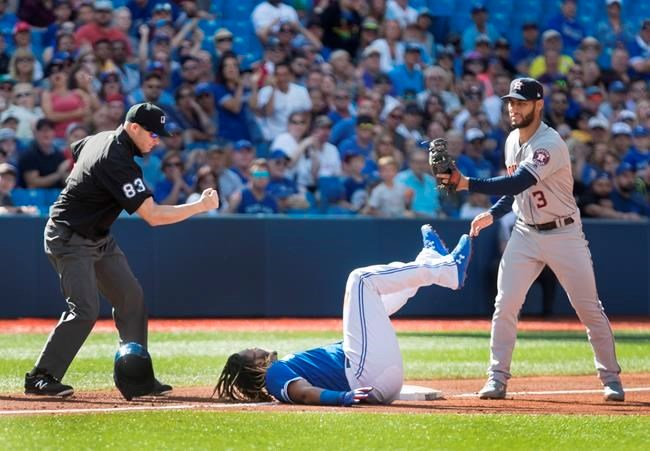 TORONTO — There are some games where it feels like the Toronto Blue Jays are taking years off of Charlie Montoyo's life.

Toronto's 6-4 win over the Houston Astros on Saturday afternoon was one of those games as starting pitcher Clay Buchholz and the Blue Jays bullpen issued nine walks and hit a batter against one of the most productive lineups in Major League Baseball. Before reporters could ask him a question at his post-game news conference Montoyo was talking about how much it stressed him out.

"I honestly aged like 10 years today," said Montoyo. "I'm glad we won, I really am. But nine walks and a hit-by-pitch against probably the best lineups in baseball? And we managed to minimize the damage?"

Montoyo then laughed and shook his head, taking off his cap to point at imaginary grey hairs on his temples.

Buchholz gave up only two runs on five walks and three hits while striking out three for his first win of the season. Tim Mayza, Derek Law, Buddy Boshers, Jordan Romano and Ken Giles came out of the bullpen, with Giles earning his 18th save of the season.

Mayza and Law each allowed a run, while the rest of the Blue Jays relievers were scoreless.

"It was a grind. I don't walk people normally," said Buchholz. "I would much rather walk a few of those guys rather than give in and throw a fastball right down the middle or hang a curveball."

Cavan Biggio led Toronto (55-82) with a two-run homer, Teoscar Hernandez added a two-run blast, and Bo Bichette had two hits, two runs, and a stolen base.

In the next at bat, Hernandez hit a high, looping shot that sailed into the Blue Jays' bullpen to make it 3-1. Brandon Drury followed that up with a single to shallow centre field, forcing a mound meeting.

Biggio sent a 1-0 pitch from Valdez over the right-field fence in the fourth inning, bringing Bichette home with him for a 5-1 lead. Biggio's father Craig spent all 20 years of his Hall of Fame career with the Astros and is still a member of the club's front office.

"I'm not going to lie, he definitely wants them to win," said the younger Biggio with a smile. "But he wants me to do well too. We're going to try and give it to them for years to come, so it's going to be a split house."

Yuli Gurriel replied in the sixth inning, banging a double off the left-field wall. Derek Fisher scrambled to retrieve the ball as it bounced along the outfield turf, scoring Bregman and Yordan Alvarez.

Bichette got another run in the bottom of the sixth, sprinting home after Biggio's double to right field. Bichette had reached base on a single then stolen second to put himself in scoring position.

After loading the bases Law walked Bregman, cutting Toronto's lead to 6-4. That brought on Boshers, who struck out Alvarez to escape the inning.