Vancouver Canucks fans will have to wait at least another couple of days to see Elias Pettersson back on the ice. The star rookie skated with his teammates ahead of Wednesday's contest with the Edmonton Oilers, but won't suit up for the game.
Jan 16, 2019 3:56 PM By: Canadian Press 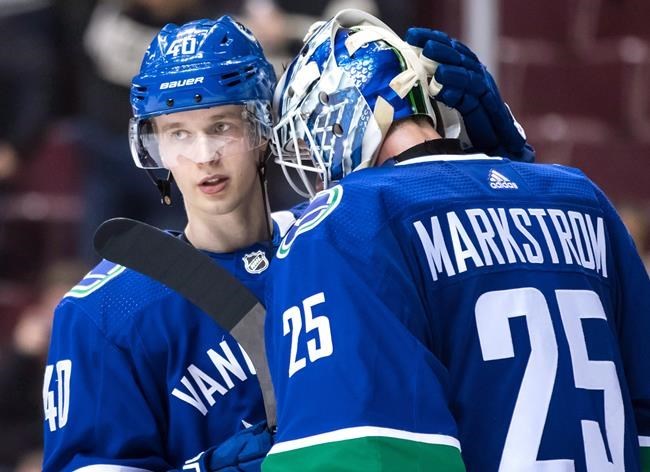 Vancouver Canucks fans will have to wait at least another couple of days to see Elias Pettersson back on the ice.

The star rookie skated with his teammates ahead of Wednesday's contest with the Edmonton Oilers, but won't suit up for the game.

It will be the fourth game in a row he's missed since suffering a knee injury in Montreal on Jan. 3.

Pettersson said he wasn't feeling any pain during Wednesday's skate and was working on his stick-handling and shooting.

"Feeling good, feeling good," he said. "Just trying to get, how you say, get the condition back after I missed some games."

The 20-year-old Swedish centre said he's watched video of the play that led to the injury, where he got tied up with Montreal Canadiens centre Jesperi Kotkaniemi and fell awkwardly.

There was no malice in the move, Pettersson said.

Pettersson hopes to be back in the lineup on Friday, when the Canucks take on the visiting Buffalo Sabres.

But he's still listed as day-to-day and there are no guarantees about when he'll return, said Canucks coach Travis Green.

"It's not up to me. It's up to him and the training staff," Green said. "And when he's ready to go, he'll be in. He's a competitive kid and he wants to play."

Pettersson leads the Canucks in scoring with 42 points in 38 games.

The team has struggled offensively at times without him, but got three points from veteran left-winger Loui Eriksson in their 5-1 win over the Florida Panthers on Sunday.

It's natural for other players to elevate their games when a teammate is injured, said Pettersson.

"When I get back, I'll just try to do what I do best and help the team win. And when I'm not there, guys will step up and play good. So I'm not worried," he said.

This is the second time the 2017 first-round pick has been sidelined by injury in his first NHL season. Pettersson missed two weeks with a concussion in October after taking a controversial hit from Florida Panthers defenceman Mike Matheson.

"Every injury is different ... But it's part of the hockey career," he said. "Like I say, it could have been a lot worse. But I'm just trying to get back to the ice now."

Despite being hurt, the league's leading rookie scorer still plans to make it to all-star weekend in San Jose later this month.

"I've grown up watching a lot of those players. Now my name is on that list too. So I'm very happy with that," Pettersson said.