PARIS — Canada's World Cup campaign ended in the round-of-16 Monday with a disappointing 1-0 loss to Sweden that saw the Canadians miss a chance to tie the game from the penalty spot.
0
Jun 24, 2019 4:58 PM By: Canadian Press 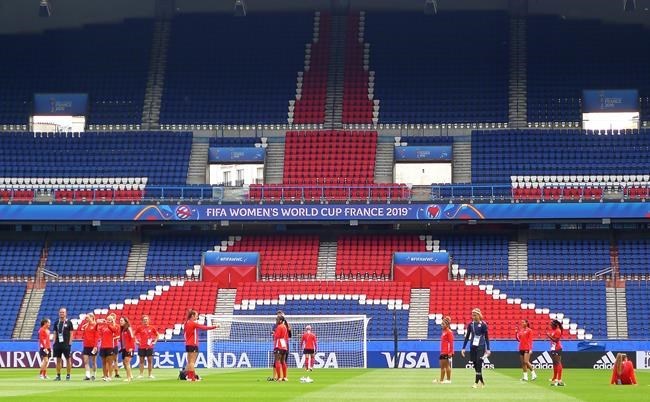 PARIS — Canada's World Cup campaign ended in the round-of-16 Monday with a disappointing 1-0 loss to Sweden that saw the Canadians miss a chance to tie the game from the penalty spot.

Fifth-ranked Canada, which came to the tournament with hopes of going far deeper, could not break down the ninth-ranked Swedes as its offence lacked clinical finishing again.

The tournament lasted just four games for the Canadian women, with two losses to lower-ranked sides.

The game started as advertised with two disciplined teams cancelling each other out before 38,078 at Parc des Princes.

But Stina Blackstenius broke the deadlock in the 55th minute on a Swedish counterattack from a Janine Beckie giveaway. Kosovare Asllanni drove up the field and sent in a cross that defender Shelina Zadorsky couldn't get to. Goalkeeper Stephanie Labbe came out but the Swede got a foot to the ball first for the all-important goal.

After the Swedish goal, Adriana Leon replaced Nichelle Prince in a bid for more offence. A Sophie Schmidt header went wide but the play went to video review for a Swedish handball from an earlier Desiree Scott shot and Australian referee Kate Jacewicz correctly pointed to the penalty spot.

Beckie stepped up, only to have Hedvig Lindahl make a marvellous diving save. While Beckie's shot was well-aimed, many will wonder why captain Christine Sinclair did not take the spot kick.

The Swedes offered more offence after their goal and thought they had a penalty in the 81st minute after Ashley Lawrence took down Blackstenius. But the penalty call was reversed on video review thanks to an offside call.

Scott cleared a Swedish shot off the line in the dying minutes.

Eight-plus minutes of stoppage time went without a goal, giving Sweden the win.

Sinclair was on her knees with her face down after the final whistle.

It was a matchup of the Rio Olympic silver (Sweden) and bronze medallists (Canada) with the gold medallist Germans awaiting the winner on Saturday in Rennes. Second-ranked Germany blanked No. 38 Nigeria 3-0 in Saturday in the first game of the knockout phase.

Prince returned to the lineup after sitting out the last group game in the only chance for Canada coach Kenneth Heiner-Moller.

While the speed of Prince and Beckie offered some Canadian promise early on, chances were few and far between. The Swedes offered little other than the occasional counterattack from a Canadian turnover. At the other end, they sometimes had six defenders in a line.

Canada looked for ways to break the Swedes down. A chance for Jessie Fleming some 20 minutes in was wasted with the ball well off-target.

Labbe took care of business in the 36th minute, rising high in a crowded six-yard box to punch away a Swedish corner with authority.

While Canada had 61 per cent of possession in the first half, it failed to register a shot. Sweden had three shots, none on target. It was the third game of the tournament without a shot in target in the first half.

Sinclair was wide on a free kick from distance in the 53rd minute.

Canada came into the game with a 5-13-4 record against Sweden, having been outscored 42-24. But the Canadians had won last time out in a 6-5 penalty shootout after a 0-0 draw in March in the third-place game at the Algarve Cup.

The Swedes were well-rested, having made seven changes for the final group game against the U.S. Coach Peter Gerhardsson retained just six starters from that game.

There were several loud pockets of yellow-clad flag-waving Swedes in the 45,600-capacity Parc des Princes. Canadian fans were there in smaller numbers but a solid Maple Leaf contingent was present in one corner and a Canada chant was heard soon after kickoff.

Swedish Prime Minister Stefan Lofven was expected at the game on a hot 29-degree Celsius evening.

Sweden came into the game never having lost to Canada at the World Cup or Olympics (2-0-1).

The Canadian women made it to the quarterfinals at the 2015 World Cup on home soil, losing 2-1 to England. Canada's best showing was in 2003 when it finished fourth (after a 2-1 loss to Sweden in the semifinals).

Canada has failed to make it out of the preliminary round in four of its seven trips to the tournament. Sweden reached the knockout stage for the seventh time in eight attempts.

The Scandinavians had never won a Women’s World Cup match that went beyond regular time, losing on penalties to China in the 1995 quarterfinals and after extra time to Germany in the 2003 final. Canada had not experienced extra time at the tournament.

Parc des Princes is home to the Paris Saint-Germain men's team. First opened in 1897, the current stadium dates back to 1972 and has been refurbished twice since, first for the 1998 World Cup and then for Euro 2016.

The PSG women, whose roster includes Canadians Lawrence and the newly signed Jordyn Huitema as well as Sweden's Hanna Glas, play at the nearby Stade Jean-Bouin.

Sinclair and Swedish captain Caroline Seger played and roomed together in 2011 while with the Western New York Flash.