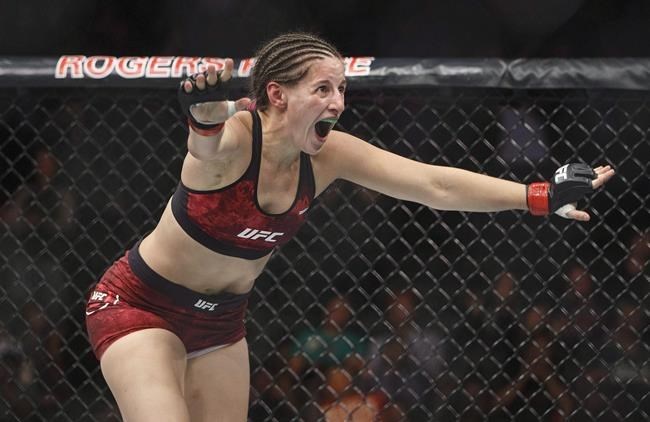 TORONTO — Canadian bantamweight Sarah (Cheesecake) Moras, who had been slated to fight on the postponed UFC 249 card, is returning to action May 13.

The 31-year-old from Kelowna, B.C., who trains out of Las Vegas, will face American Sijara (Sarj) Eubanks on a televised card May 13 at VyStar Veterans Memorial Arena in Jacksonville, Fla. Eubanks is ranked 15th among 135-pound contenders.

Moras posted news of the fight on her Instagram page. "It's back on," she wrote.

The two were originally slated to meet April 18 in Brooklyn, N.Y. The card was eventually switched to Lemoore, Calif., but the card was postponed at the behest of ESPN, the UFC's broadcast partner, due to COVID-19 restrictions.

Moras (6-5-0) stopped Georgia's Liana Jojua by TKO last time out in September, snapping a three-fight losing streak. She is 3-4-0 in the UFC in a fighting career that included a 785-day hiatus due to injuries.

Moras said via social media that she had just completed her last sparring session April 9 when she got to her phone and found out the April 18 show was off. She had trained for the fight in her living room and garage because of restrictions on gatherings.

UFC 249 has since been rescheduled to May 9 at the same venue in Jacksonville.