TORONTO — Milan Borjan speaks English, Spanish, Bulgarian and Serbo-Croatian — variations of which cover Serbia, Bosnia, Croatia and Montenegro — understands Turkish and has a little Romanian and Polish in his language repertoire.
0
Sep 3, 2019 3:28 PM By: Canadian Press 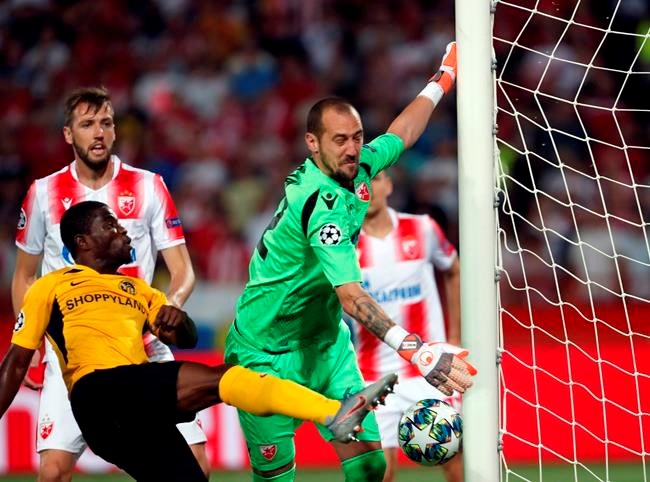 TORONTO — Milan Borjan speaks English, Spanish, Bulgarian and Serbo-Croatian — variations of which cover Serbia, Bosnia, Croatia and Montenegro — understands Turkish and has a little Romanian and Polish in his language repertoire.

But the Red Star Belgrade goalkeeper's allegiance to Canada is hard to miss. Inked on the back of his calf, a Maple Leaf amidst a snippet of lyrics from "O Canada" is proudly displayed.

"Canada gave my family a lot," Borjan said. "I get goose bumps (thinking about it) right now ... They gave us a better life."

"When everybody asks me where I'm from and do I feel Serbian or Canadian, I always say Canadian," added the 31-year-old dual citizen. "Because this is the country that I grew up in — in a nice way. I didn't have to think about wars and stuff like that."

Canada's CONCACAF Nations League matches with Cuba have brought Borjan back. The 78th-ranked Canadian men host No. 179 Cuba on Saturday at BMO Field before a rematch Sept. 10 in the Cayman Islands (a stadium in Havana was deemed not to meet CONCACAF standards).

Borjan, Canada's No. 1 goalkeeper, has 45 caps to his credit as part of a soccer journey that has taken him around the globe.

His parents were born in the former Yugoslavia — his father in Drnis and mother in Knin. Milan grew up in Knin and Belgrade before the family moved to Winnipeg when he was 13. A year later it relocated to Hamilton.

His father, a former 'keeper himself, was goalkeeping coach with the Hamilton Thunder of the Canadian Professional Soccer League. He has also served as president of the CSL's Brantford Galaxy.

Borjan was a teenager when he went down to Argentina in 2005 for a month-long trial with Boca Juniors' youth team. He then spent 18 months with Uruguay's Nacional Montevideo and had stints with Argentina's River Plate and Quilmes.

He had hoped to sign with River Plate but after two weeks of sitting in a hotel room, he called his father for advice. That led to a trial — and eventual job — with Serbia's FK Rad.

Borjan's move to Belgrade came at the Gold Cup. He was about to accept an offer from a Turkish club when Red Star called him. Despite the club's financial issues at the time, he couldn't say no. Now the club and Borjan are flying high.

Red Star won Serbia's Super Liga titles in 2017-18 and '18-19 and the team stands third this season with a 5-0-0 record, having played two matches less than the sides above it.

And Borjan has turned heads in Champions League play with shutouts against mighty Liverpool and Napoli in last year's tournament. After beating Switzerland's BSC Young Boys, Red Star was drawn alongside Bayern Munich, Tottenham and Olympiakos in the group stage of this season's Champions League.

"The last two years I've been there and things have been going amazing," said the goalkeeper, who savours life with his wife and son despite his celebrity in the Serbian capital.

At six foot four, Borjan is easy to spot.

"People love that club ... It's pretty big over there," he said.

It means more than a few interruptions when he goes out.

"It's totally different than in Canada," he said with a laugh. "Here I come out, nobody recognizes me. Over there, yes. The whole country recognizes you. Anywhere you go, they take pictures, they ask for autographs. You go to a restaurant, they don't let you pay.'"

He takes the notoriety in stride.

"In some way, it's amazing, it's beautiful and nice. But in some ways, it's a little bit too much because you cannot go and sit down and relax a little bit. I go out with my wife or friends and we sit, talk, a lot of people come disturb us, taking pictures and stuff like that. But I'm a guy who doesn't like to say no. I like to accommodate everybody."

There are fans aplenty.

In May, Borjan was honoured as the Red Star Sports Club Male Athlete of the Year for 2018.

The award, announced during the club's 74th anniversary celebrations, goes to the top athlete across the Red Star Sports Club teams. Borjan was the 10th soccer player to win — and the first since 2005.

"Back home he's a legend (in Serbia). He's probably one of the most notable people in that city (of Belgrade) and even that country. So I think we're very blessed to have him here," said Canada coach John Herdman.

Borjan will be mentoring 25-year-old Maxime Crepeau of the Vancouver Whitecaps and 22-year-old Marco Carducci of Calgary's Cavalry FC at this national team camp. Crepeau has two caps while Carducci has yet to play for the senior side.

"He could have stayed at home. He's had a hell of a schedule. His club wanted him to stay there. But that guy gets on an airplane (Belgrade to Frankfurt to Toronto), he'll fly more hours than anyone else to be with his country. Because he said the country was here for him when he didn't have his club seasons and it wasn't going well at club (level) he wants to repay the country."