Canada's Team? Not quite - Raptors own the post-season but not everyone on board

TORONTO — Canada's Team? Not quite. The Toronto Raptors enjoy a strong following in southern Ontario but it can be a rather mixed bag throughout the rest of the country.
0
May 16, 2019 7:00 AM By: Canadian Press 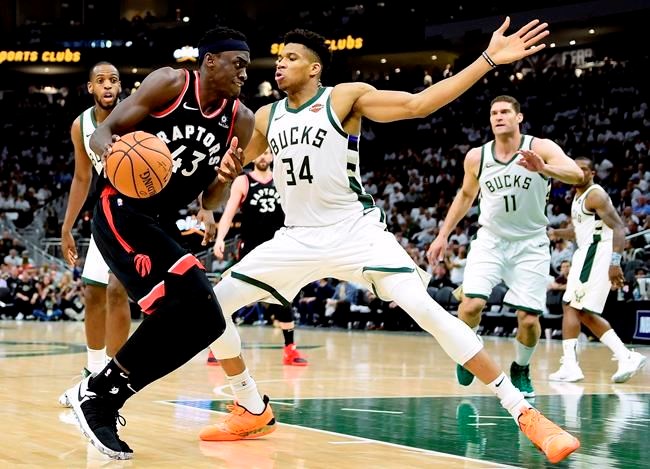 TORONTO — Canada's Team? Not quite.

The Toronto Raptors enjoy a strong following in southern Ontario but it can be a rather mixed bag throughout the rest of the country. Supporters have been out in force in some cities but other markets are greeting the team's deep playoff run with a shrug of the shoulders.

Depending on the depth of team allegiance, sports fans in this country sometimes gravitate to Canadian clubs left standing in the post-season. With Canadian NHL teams eliminated and the soccer and baseball seasons in the early going, the Raptors are the last remaining option among the top North American sports leagues.

Toronto superstar Kawhi Leonard has done his part to get people excited.

His series-winning buzzer-beater last Sunday night gave the Raptors a berth in the Eastern Conference final against Milwaukee. Vancouver Whitecaps centre back Doneil Henry, a Raptors fan from Brampton, Ont., was walking his dog at the time.

"When Kawhi made the shot, you could hear everybody in Vancouver kind of screaming from my rooftop," said Henry. "So I was really happy and I knew that we won."

An average 2.2 million Canadian viewers tuned in to Game 7, making it the most-watched NBA game ever in Canada, Sportsnet said. That's still well below the ratings generated when the Blue Jays are in the playoffs — for example, the Jays averaged 5.12 million viewers for Game 6 of the 2015 American League Championship Series against Kansas City and 4.02 million for their 2016 wild-card win over Baltimore —  but progress is being made.

"I really believe the Kawhi Leonard buzzer-beater, win or lose in this next round, could go down in history as a real tipping point for basketball culture in Canada," said Tom Mayenknecht, a Vancouver-based marketing communications executive and sport business commentator.

"Because we don't have a basketball culture, it's obviously a heavily dominated hockey culture in this country. But this engaged so many people."

Twitter Canada called it the "most tweeted about game" in team history, with over 40,000 tweets sent globally in the 60 seconds after the buzzer.

"The Raptors conversation has heated up on Twitter across Canada in the past several springs but we've never seen the tweet volume that we saw on Sunday night," said Twitter Canada sports lead Christopher Doyle.

"It truly was a national story across traditional and social media, and we anticipate huge volumes of conversation around the Raptors to continue in round three."

The Raptors have become playoff regulars in recent years but have never reached the NBA Finals. It might take an appearance in the league championship to really move the needle in this country.

Hockey has been king in Canada for over a century while baseball, helped by the old Montreal Expos (1969-2004) and two-time World Series champion Toronto Blue Jays (1977-present), has deeper roots than basketball.

The Raptors and Vancouver Grizzlies made their respective debuts in 1995. The Grizzlies moved to Memphis in 2001.

Canada's lone NBA team has managed to develop a decent following in Vancouver despite being over 3,000 kilometres away. The Raptors held their training camp there last year and have played some pre-season games at Rogers Arena.

Brittany Murdoch, manager of the Shark Club in Vancouver, said they've had up to 500 people — many sporting Raptors gear — pack the sports bar to watch the team in the playoffs.

"The response has been fantastic," she said. "We're usually a full house."

Meanwhile in Calgary, fans still flock to the sports bars on the vaunted Red Mile even with the first-round elimination of the hometown Flames. However, hockey usually remains the first choice on the tube.

"We have a private room set up for when there's Raptors' games and it usually doesn't get super busy in there ... unfortunately," said Sam Purdon from Jamesons Pub 17th Ave.

Montreal restaurant owner Jon Cercone has been a Raptors fan for about two decades. He said the Game 7 win over Philadelphia was a hot talking point around town.

"People are on the bandwagon because it's all over sports media," he said. "The Raptors are the No. 1 story."

"For the past few years since the Habs haven't been doing as well, people have lost a lot of interest in hockey," he said. "So we've been getting a lot more interest in Raptors games than for any hockey playoff game."

The Bucks took Game 1 of the East final 108-100 Wednesday night at Milwaukee's Fiserv Forum. Game 2 was set for Friday in Milwaukee before the series shifts to Toronto's Scotiabank Arena for Game 3 on Sunday.

Noah Sidel, a Montreal businessman and basketball fan, hasn't cheered for a specific team since Michael Jordan's run with the Chicago Bulls.

Sidel said it's the same "syndrome" that accompanies the Blue Jays because as the only team in the country they, like the Raptors, can be painted as Canada's team by default.

According to a regional breakdown of the Raptors-76ers Game 7 by average minute audience, Ontario led the way at 74 per cent. Western Canada was next at 17 per cent, followed by Atlantic Canada at six per cent and Quebec at three per cent, Sportsnet said.

Sidel said there's no doubt the Raptors have done well to lay down roots and grow the game in the Ontario capital.

"But I have no affinity for them at all nor do I think they're particularly special to Montrealers," Sidel said. "How could any self-respecting Montrealer cheer for a team from Toronto?"

Follow @GregoryStrongCP on Twitter. With files from Bill Graveland in Calgary, Stephanie Taylor in Regina, Adam Stanley in Ottawa, Sidhartha Banerjee in Montreal and Gemma Karstens-Smith in Vancouver.