Calgary Stampeders quarterback Bo Levi Mitchell took another step towards returning to the football field with zip on his passes in Friday's practice.
0
Aug 30, 2019 5:12 PM By: Canadian Press 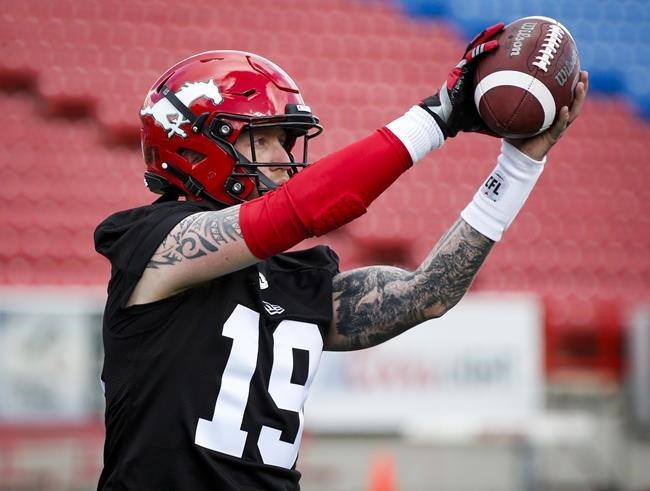 Calgary Stampeders quarterback Bo Levi Mitchell took another step towards returning to the football field with zip on his passes in Friday's practice.

The CFL's Most Outstanding Player and Grey Cup MVP in 2018 hasn't played since suffering a tear in the pectoral muscle of his throwing arm in a June 29 game.

"I think he made strides again, so that was positive," Dickenson said.

Mitchell had targeted the Aug. 17 home game against Montreal has his return date. The quarterback wasn't ready, however, and returned to the six-game injured list.

Backup Nick Arbuckle is 4-3 in starts in Mitchell's absence.

Mitchell was activated again this week and split reps with Arbuckle on Thursday. He threw the football with authority Friday and made some long completions.

"The ball's coming out really well," Mitchell said. "Honestly I feel a thousand times better than yesterday. It's just building that capacity, throwing a lot."

Dickenson said he and Stampeders general manager John Hufnagel discussed the quarterbacking situation Friday, but have yet to make a decision.

"We're just not there yet," Dickenson said. "It is nice to see (Mitchell) improving and making those throws you're used to seeing him make."

Mitchell, 29, reached a career 25,000 passing yards in the June 29 game before he was sidelined late in the fourth quarter.

Arbuckle, 25, has a completion rate of 73.4 per cent with 11 touchdown throws in eight games.

Canada's Stewart Friesen ready to get back to racing at NC Education Lottery 200
May 25, 2020 12:13 PM
Comments
We welcome your feedback and encourage you to share your thoughts. We ask that you be respectful of others and their points of view, refrain from personal attacks and stay on topic. To learn about our commenting policies and how we moderate, please read our Community Guidelines.