WINNIPEG — Laurent Brossoit didn't mind facing a barrage of pucks. He quite enjoyed it, actually.
Jan 16, 2019 4:26 PM By: Canadian Press 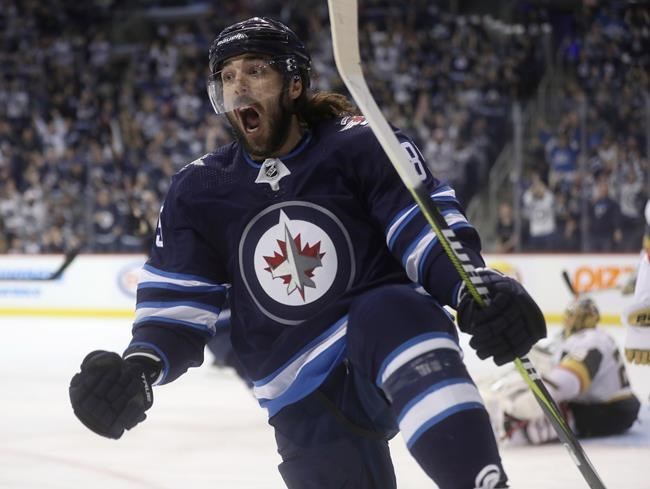 WINNIPEG — Laurent Brossoit didn't mind facing a barrage of pucks. He quite enjoyed it, actually.

The Jets backup goalie stopped a franchise-record 26 shots in the second period and made a season-high 43 saves in Winnipeg's 4-1 victory over the Vegas Golden Knights on Tuesday.

"You know what, I like periods like that," said Brossoit, who's started 11 games this season (10-0-1) and has seven consecutive wins.

"I like games like that where I'm tested early and often. The second period was definitely one of those and it got me into the game. There's not a lot of rest in between. I like that."

Vegas outshot the Jets 10-9 in the first period and 26-7 in the second. The old franchise record for saves in a period was 25 by former netminder Ondrej Pavelec in January 2017.

Kyle Connor scored a short-handed goal and put one into the empty net for Winnipeg, which won every game in a three-game homestand and is 5-1-0 in its past six games. Connor also added an assist.

Mathieu Perreault scored at even strength and Mark Scheifele also had an empty-net goal for Winnipeg (30-14-2). Scheifele added an assist and Blake Wheeler contributed a pair.

"He played good. He had a lot of shots," Fleury said. "It happens, I think, at this level. The goalie's good and they all can give a chance to their team to win games and that's what he did tonight."

Wheeler said Brossoit has been "outstanding" ever since the former Edmonton Oilers netminder signed with the Jets in the summer.

"You can tell he came into camp with a chip on his shoulder. Something to prove," Wheeler said. "Got an opportunity here and boy has he been a difference-maker for our team.

"He's one of those guys that's a driver every day. In practice, and in games. You can tell. His performance, when he's in the net, he's been great this year."

Winnipeg led 2-0 after the second period and Pirri cut the lead 63 seconds into the third.

It was the first meeting between the teams since Vegas beat the Jets in five games in last season's Western Conference final.

After a scoreless first period, Winnipeg got goals from Connor and Perreault in the middle period that was slanted toward the visitors.

"We kept playing, we had lots of shots and lots of chances and their goalie was outstanding. That was the difference," Vegas head coach Gerard Gallant said.

At one point in the second period, Vegas was outshooting Winnipeg 17-2, but Connor scored his 17th goal of the season on a breakaway while the Jets were shorthanded at 5:45.

Perreault scored an unassisted goal at 16:23 after he got a loose puck and skated across the front of Fleury, sending a backhand shot over his glove. The goal drew jeering chants from the crowd of "Fleury, Fleury."

"We had some power plays, some chances but just wish I could have made one of those breakaway saves to keep us in there," Fleury said.

Winnipeg's lead was also surprising considering the Golden Knights were carrying over their sixth power play of the game into the third period.

Connor scored into the empty net at 18:47 and Scheifele added his with six seconds remaining. Scheifele has three goals and six assists in a six-game point streak.

The Jets finished 0 for 2 on the power play and the Golden Knights 0 for 6.

Winnipeg heads out for a two-game road trip, starting Thursday in Nashville. Vegas returns home to host Pittsburgh on Saturday.