CALGARY — For David Perron, it's become his home away from home. Up against a team he's always thrived against and in a building he enjoys playing in, Perron had a goal and an assist in regulation and added another goal in the shootout as the St.
0
Jan 29, 2020 1:43 AM By: Canadian Press 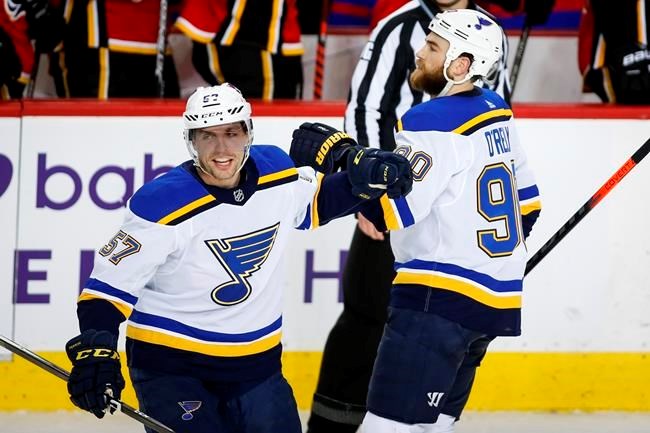 CALGARY — For David Perron, it's become his home away from home.

Up against a team he's always thrived against and in a building he enjoys playing in, Perron had a goal and an assist in regulation and added another goal in the shootout as the St. Louis Blues won 5-4 on Tuesday over the Calgary Flames.

Perron has 17 goals in 39 career games against Calgary. That includes 12 goals in 20 games at the Scotiabank Saddledome.

“I like the old barn, maybe. I don’t know,” said Perron, when asked about his success historically against Calgary. “I always have fun coming up to Canada and playing here, even when I was back with the Oilers.”

The Blues had yet to win in a shootout this season, entering the night 0-3. The Flames had yet to lose at 5-0, but it was over quickly with Perron and Ryan O'Reilly scoring on St. Louis' first two shots and Sean Monahan and Matthew Tkachuk both failing to score.

In a wild back-and-forth game in which both teams blew two leads, St. Louis tied it 4-4 less than a minute into the third period.

After Andrew Mangiapane hit the goal post at one end, the Blues raced up ice on a 2-on-1 with Zach Sanford keeping the puck and ripping a shot over Cam Talbot's glove.

St. Louis then scored what appeared to be the go-ahead goal less than three minutes later when Talbot muffed Perron's shot off the wing. However, interim head coach Geoff Ward challenged the play for offside and after video review, the goal was waved off.

“I kind of had a feeling right away,” said Perron, who extended his point streak to four games (2-4-6). “Even going through the line I was asking, ‘is it offside?’ Coming back to the bench I saw coach right away. If it’s a quick challenge like that, it doesn’t go our way very often.”

No matter, the Blues would pull out the win anyway to snap a five-game road winless skid.

St. Louis lost 3-1 in Vancouver on Monday night in its first game back after an eight-day layoff. It was the Flames' first game in 10 days.

“It’s tough to come off (the break) and have two back-to-back games against teams that play heavy and have speed,” said O'Reilly. “It is good though. We got two points tonight. Last night they were available and we didn’t get them. We have to keep building and keep growing our game and get back on track here.”

Calgary had opportunities to open up a larger lead in the second when Johnny Gaudreau, who had two assists, had two breakways, but Jordan Binnington denied him each time.

“He's a good goaltender,” Gaudreau said. “You watch him in the playoffs last year, he's a hard goalie to score against. The first breakaway, I didn't sell it enough. Second one, I just missed low, he got a quick blocker on it.”

A perfect 3 on 3 on the power play in regulation, the Flames got a fourth man-advantage in overtime, but squandered it.

“It’s obviously a big kill,” said Blues captain Alex Pietrangelo. “Four-on-three’s are never easy, especially late in the game when you’re tired, legs and brain are a little tired. Good time for us to step up and kill that.”

Sean Monahan with a pair, Matthew Tkachuk and Mark Jankowski scored for Calgary (26-19-6). The Flames are right back in action on Wednesday night in Edmonton when they renew hostilities with the Oilers.

With momentum bouncing back and forth, Calgary went ahead 4-3 at 9:47 of the second when Jankowski converted a centring feed from Sam Bennett. It's the second goal in as many games for Jankowski after he started the season without a goal in the first 38 games.

“You can tell that teams coming off nine days off aren't the sharpest,” said Talbot, who had 30 stops to fall to 7-7-1. “You can tell there's some execution issues, coverage and stuff both ways. Coming out of the break that's kind of what you expect.”

Notes: Steen's goal was his 494th career point, moving him ahead of Pavol Demitra and into fifth place on the Blues' all-time list. Steen later left the game with a lower-body injury... Schwartz played in career game No. 500... Flames RW Buddy Robinson, 28, just up from Stockton (AHL), played his eighth career game and first since Dec. 10, 2016 when he was an Ottawa Senator... Monahan recorded his 400th NHL point.

This report by The Canadian Press was first published Jan. 28, 2020.

Toronto Wolfpack look for different result in return visit to Warrington
Feb 20, 2020 2:59 PM
Comments
We welcome your feedback and encourage you to share your thoughts on this story. We ask that you be respectful of others and their points of view, refrain from personal attacks and stay on topic. To learn about our commenting policies and how we moderate, please read our Community Guidelines.